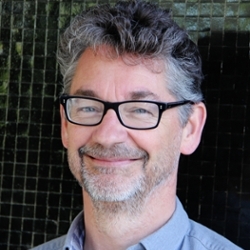 The College of Arts and Sciences welcomes Glenn Peers as professor of art history in the Department of Art and Music Histories. Peers joined Syracuse University in July after 20 years at the University of Texas-Austin, where he developed an international reputation for his scholarship on Byzantine art and culture.

“Glenn brings valuable expertise to the department in ancient and late antique art,” says Department Chair Romita Ray. “We now have a bridge between the ancient and the medieval.”

Much of Byzantine art centers on devotional objects. “There wasn’t a separation of church and state like we, in modern states, sought to be ruled under,” Peers explains. “In fact, they thought the opposite, that church and state needed to be closely intertwined, because if God wasn’t in favor of the state, then the state couldn’t survive.”

In addition, the church was a strong factor in post-medieval life, whereas the state was supplanted by other rulers, who tended to erase traces of their predecessors. “So it’s the religious art that survives more fully than the secular art,” he says.

Peers is author or co-author of six books, including “Subtle Bodies: Representing Angels in Byzantium” (University of California Press, 2001), “Sacred Shock: Framing Visual Experience in Byzantium” (Pennsylvania State University Press, 2004) and “Orthodox Magic in Trebizond and Beyond” (La Pomme d’or, Seyssel, 2018). He was editor of “Byzantine Things in the World” (Yale University Press, 2013), a companion to an exhibition of the same name at Houston’s Menil Collection that he curated in 2013.

In the exhibition, Peers juxtaposed Byzantine icons, crosses, pilgrim tokens and reliquaries with “like-minded objects” from other cultures and periods, including modern works from artists such as Robert Rauschenberg and Mark Rothko. “They allowed me to maneuver modern and medieval works into a kind of conversation that hasn’t happened anywhere else, to my knowledge,” says Peers, who calls the project “one of the most stimulating and satisfying professional experiences I’ve ever had.”

It’s inspired a second book, “Byzantine Things Into the World,” currently in progress, which Peers says is a set of reflections that have accumulated about the experience of working with the objects and of working with people who were also experiencing the objects as well. “The security guards at the Menil, for instance, gave me a lot of insight into the exhibition that I couldn’t have gotten myself,” he says.

A Native of Nova Scotia, Peers became interested in ancient art during a six-week summer abroad trip to Greece after his first year of college. “I didn’t really travel or have exposure to other cultures growing up, and that experience absolutely changed my life,” he says.

He went on to major in classics and spent his junior year in Athens, putting him on a path to his vocation. “Being able to experience these historical works of art in their proper context has always been deeply stimulating and exciting for me,” he says.

Peers earned his Ph.D. in the history of art at The Johns Hopkins University and a Licentiate in Medieval Studies at the Pontifical Institute of Medieval Studies at the University of Toronto. During the 2007-08 academic year, he was a member of the Institute for Advanced Study at Princeton University. During the 2011-12 academic year, he was Whitehead Professor at the American School of Classical Studies at Athens. In summer 2014, he was a senior fellow at the Internationales Kolleg für Kulturtechnikforschung und Medienphilosophie, Bauhaus-Universität Weimar in Germany.

While at UT-Austin, Peers led three study abroad trips to Syracuse, Sicily, and is quite excited about the prospect of creating a “Syracuse at Syracuse” program. “Syracuse, Sicily, is a very important classical city, but also kind of a crossroads where different fates and cultures met in the Middle Ages. Islam, Christianity and Judaism were all very important components in that culture and society,” he says. “Study abroad deeply informed my own development and life path, and it would be deeply satisfying to give that experience to undergraduates here.”