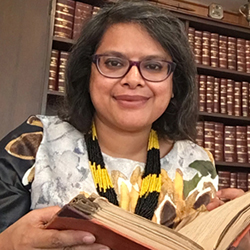 Romita Ray, associate professor of art history and chair of the Department of Art and Music Histories in the College of Arts and Sciences, spent two and a half months in London this summer conducting research at the National Maritime Museum (NMM) as the recipient of a competitive Caird Short-Term Research Fellowship.

Ray used the archives and museum collections of the NMM as a resource to better understand how the East India Company focused on Chinese tea as a valuable plant commodity that could be transplanted in India—the subject of the first chapter of her forthcoming book on the visual histories of Indian tea.

“The museum is located near the edge of the Thames, which encouraged me to think about all of the rivers that connect to the seas that brought tea to different shores,” she says.

Ray’s book, tentatively titled “From Two Leaves and a Bud: The Visual History of Indian Tea,” intends to analyze the visual cultures of Indian tea consumption from the colonial era to the modern day. She begins with the rise of the British-owned East India Company, which monopolized the 18th-century tea trade in Asia and India; continuing with the Victoria Raj period of British rule from 1858 to 1947; and concluding with post-independent India, where tea drinking has made the transition from an imperial tradition to a national pastime.

She has conducted extensive research—in tea plantations, botanical gardens and herbaria, and in archival holdings of tea companies and tea brokers—supported in part by two prestigious National Endowment for the Humanities grants that funded her research in the UK, India. and Sri Lanka.

Ray says her NMM residency was particularly valuable in helping unpack tea in the context of transnational trade. She used the museum’s archives to examine handwritten ships logs, records, diaries and other documents, and to study objects in the museum collections, including porcelain and silver, coastal maps and paintings of sea life.

“That’s the beauty of being in contact with objects and archives—it’s a deeply immersive process. You have to hide and investigate, and for that you need time away from your other duties,” she says. “The whole point was to write from London, which was the center of imperial power and headquarters of the East India Company.”

Ray says the NMM curators and research librarians were a fantastic resource, both at pointing her to objects and areas within the collection as well as to other scholars. In addition to conducting valuable book research, Ray connected with two historians during her stay—Jordan Goodman, an honorary research associate in the Department of Science and Technology Studies at University College London, who has published widely on science and medicine, and Richard Coulton, a lecturer on 18th-century literature and culture at Queen Mary, University of London, and co-author of “Empire of Tea: The Asian Leaf That Conquered the World” (Reaktion Books, 2015). The three scholars are now planning a conference on tea and natural history in 2020. “We plan to bring in speakers from Britain, Europe and North America,” she says.

Ray will return to the NMM next summer to complete the final month of her Caird Research Fellowship. She says her writing will guide her detective work. “Depending on which direction the chapter is taking, I will follow that thread to the collection that is most related to what I am writing about. It’s thrilling to play tea detective!”