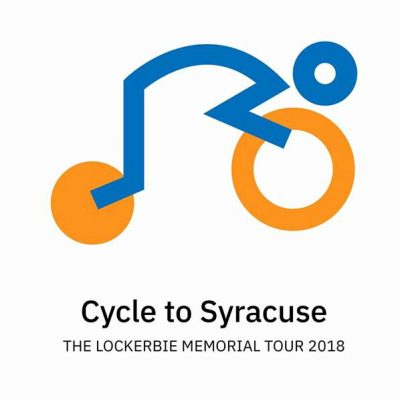 A team of cyclists from Lockerbie, Scotland, will arrive at Syracuse University on Thursday, Nov. 1, completing a 3,238-mile journey in honor of the victims of Pan Am 103.

The Cycle to Syracuse team will arrive on the Einhorn Family Walk in front of the Goldstein Alumni and Faculty Center at 3 p.m. Bagpipers will lead the cyclists up the walk to the front of the Schine Student Center, where a brief program will be held.

Members of the University community are invited and encouraged to attend and welcome the cyclists.

In addition to honoring the victims, the ride is intended to raise awareness of emergency services and mental health issues.

For the next stage, a 70-mile cycle ride from the memorial cairn at Lockerbie Academy to Edinburgh Castle took place on Oct. 13.

In the final stage, team members are cycling more than 600 miles from Washington, D.C., to Syracuse, arriving in time to participate in Syracuse University’s Annual Rose-Laying Ceremony to honor the 270 victims of Pan Am 103, including 35 SU students, lost on Dec. 21, 1988.

After a day of rest, the team was sent off from Lubin House, SU’s home in New York City, early in the morning of Oct. 30 by Dan French, University senior vice president and general counsel, and Secretary of State for Scotland David Mundell. Laura Beachy, a 2011-12 Remembrance Scholar, led the cyclists out of the greater New York area.

More information on the memorial ride can be found at cycletosyracuse.com.