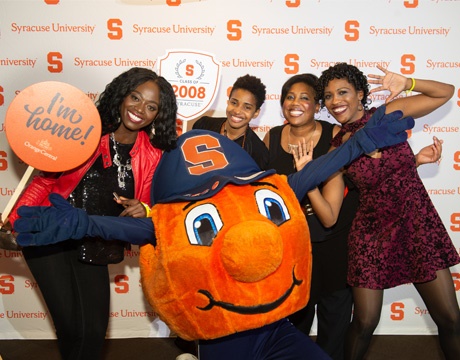 A record-setting Orange Central weekend brought thousands of proud alumni back home to Syracuse University for SU’s annual reunion and homecoming celebration, Oct. 18-21. It was a weekend of reminiscing and reconnecting with classmates and professors, sharing nostalgic moments from yesteryear while making new friends.

Here are just a few of the stories that highlight what makes Orange Central so special.

When Mike Carchia ’68 and Fred Boecher ’68, G’70 reconnected this weekend, they hadn’t seen each other since the day their graduation 50 years ago. The two engineering majors were roommates in their fraternity. When they ran into each other in their hotel lobby as they prepared to celebrate their 50th Reunion, the memories came rushing back as they quickly made up for five decades of lost time.

“Being engineering students there was a lot of studying involved, but those aren’t the memories that stick out in my mind,” said Carchia, an electrical engineering major who was impressed by what he saw on campus. “The University has just expanded so much, and what that does is it brings you closer to Syracuse. Coming back to this campus and seeing all of the improvements, I feel closer and more connected. I’m so glad I came back!”

As students, Carchia and Boecher cheered on the SU football team in Archbold Stadium, the outdoor venue that preceded the Carrier Dome. They braved the elements to watch standouts like Floyd Little ’67 and Larry Csonka ’68 lead Syracuse. While the nostalgia is nice, both agree watching a game from inside the climate-controlled Dome is far more comfortable.

“We froze our butts off in the seats at Archbold Stadium, so it was great to watch the game from the Dome. It was on my bucket list to get back here and see how much the campus has changed, and I’m so glad I came back,” said Boecher, a civil engineering major. “It was fun to be reunited with Mike. We’ve spent a lot of time together back on campus this weekend. I have so many fond memories of this place.”

All in the family

Orange Central was the scene for a special family reunion, as three generations—Patricia Bilotta Button ’58, Sally Mitchell ’82, G’83, and Elizabeth Mitchell ’02—attended several events together, including the SU football game.

Sally Mitchell grew up in Syracuse and fondly recalled trips to campus with her parents, Patricia and Robert Button ’57, and her sister, Maxine Button Babcock G’85. The chance to bring together three generations of Orange alumnae was important to Mitchell.

“SU means home. My family is there, my university is there, and even my home is close to campus,” said Sally Mitchell, who attended the Syracuse Ambulance reunion after the football game.

“Syracuse University played a huge role in our lives, and it was a great weekend celebrating being an Orange legacy family. It was a proud moment having the three of us back on campus and I’m just so glad we could make this happen.”

Getting the band back together

Edward O’Rourke ’73, G’89 and Sherye Sedlak ’72 were among a group of 15 former marching band members who came back to campus for Orange Central, enjoying the marching band alumni reunion and pre-game processional through the Shaw Quad.

“Homecoming means we get to meet up with our friends and visit with each other on campus, “said O’Rourke, who played the clarinet and used to perform with the alumni band. “Reliving our college memories helps all of us feel young and connected to Syracuse,”

“Syracuse is special to both of us. Even though we keep in touch, we don’t see each other every year like we would prefer, so when we do get together, it’s a special occasion,” said Sedlak.

The Orange runs deep in Sedlak’s family. Her mother, Mildred Spath ’46, is an alumna, and she met her husband, Stephen Sedlak ’74, in marching band.

When it came time to plan their friends’ vacation, Joan Schaeffer ’74, Jennifer Bone ’74, Cindy Demnitz ’74 and Christine Gibbons ’74 originally targeted Cuba. Instead, the lifelong friends chose to return to Syracuse to celebrate their 44th Reunion (Class of 1974), the first year SU celebrated that milestone reunion.

“We get together every couple of years, but this year we came back to campus for our reunion. We hadn’t been on campus in quite some time, since our 10th- or 15th-year reunion. None of us have changed a bit,” Schaeffer said with a wink.

“Being back on campus is special. Just seeing friends made us all excited for the weekend. I never went to a football game the entire time we were students, so we were looking forward to the homecoming football game,” added Bone, whose daughter Rachel graduated in 2004 from SU.

Relive the weekend with our photo slideshow, check out our Orange Central photo gallery, and visit the milestone and special interest reunions photo gallery.