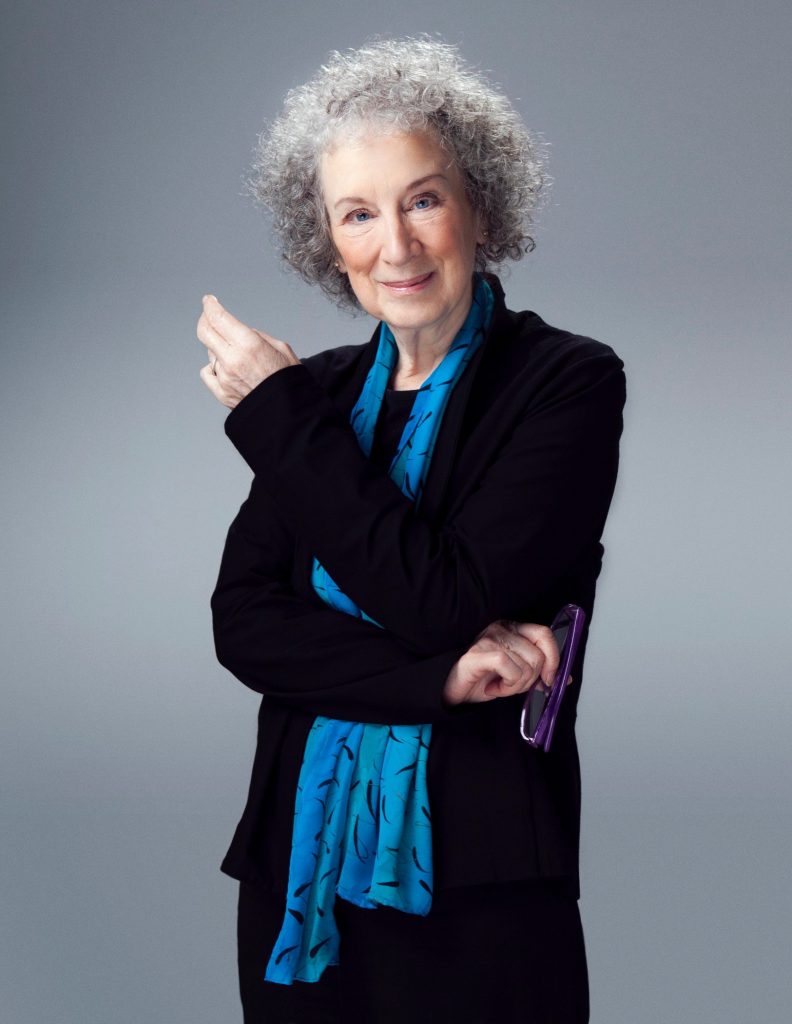 Acclaimed author Margaret Atwood (“The Handmaid’s Tale,” “Alias Grace”) will visit Syracuse University on Thursday, Oct. 25, and participate that evening in an on-stage conversation in Hendricks Chapel for the University Lectures series.

The event, which is free and open to the public, starts at 7:30 p.m. Part of SU’s Family Weekend, it is co-sponsored by the College of Arts and Sciences and the Syracuse University Humanities Center, with media sponsor WAER. Atwood’s appearance is also part of the Humanities Center’s Syracuse Symposium programming, which is focusing this year on the meaning and impact of “STORIES” from diverse perspectives.

Atwood will be speaking with fellow novelist Dana Spiotta, associate professor of English in the College of Arts and Sciences. At the conclusion of their conversation, the floor will open for questions from the audience. The SU Bookstore will have a selection of Atwood’s books available for purchase in the Hendricks narthex before and after the event. There will be no book signing opportunity.

Atwood has been a recipient of the Man Booker Prize, the Arthur C. Clarke Award for Best Science Fiction, the Franz Kafka International Literary Prize, the Harvard Arts Medal, the Raymond Chandler Award, the Carl Sandburg Literary Award and a Guggenheim Fellowship, among more than a hundred honors. She has also received 26 honorary degrees.

The six-episode adaptation of Atwood’s murder mystery “Alias Grace” is currently available on Netflix, having debuted in November 2017.

Her children’s book “Wandering Wenda and “Widow Wallop’s Wunderground Washery” (McArthur & Co., 2011) was produced as an animated children’s series. MGM is producing a series from her novel “The Heart Goes Last” (McClelland & Stewart, Bloomsbury, Nan A. Talese/Doubleday, 2015). And Paramount is adapting the three books in her MaddAddam series (McClelland & Stewart, Bloomsbury, Doubleday)—“Oryx and Crake” (2003), “The Year of the Flood” (2009) and “MaddAddam” (2013)—into a television series.

In 2016, Atwood entered the world of graphic novels with “Angel Catbird” (Dark Horse), the story of a young genetic engineer who accidentally mutates into a cat-owl hybrid, which debuted at No. 1 on The New York Times Bestseller List. She has since written volumes two and three. And the complete 320-page collection was released Oct. 16.

Atwood recently teamed with Eisner Award-winning illustrator Ken Steacy for a three-issue comic book series, “War Bears,” which tells the story of the early days of comics in Toronto and one fictional cartoonist’s struggles with the industry in the 1940s.

Atwood is a founding trustee of the Griffin Poetry Prize and a founder of the Writers’ Trust of Canada, a nonprofit literary organization that seeks to encourage Canada’s writing community.

In addition to her literary endeavors, Atwood is an inventor. In 2004, while on a paperback tour in Denver for her novel “Oryx and Crake,” Atwood conceived the concept of a remote robotic writing technology, the LongPen, that would allow someone to write in ink anywhere in the world via tablet PC and the internet.

Spiotta is recipient of a Guggenheim Fellowship, a New York Foundation for the Arts Fellowship and the Rome Prize in Literature. In 2017, she received the John Updike Prize from the American Academy of Arts and Letters.

About the University Lectures
The University Lectures was created through, and is supported by, the generosity of alumnus Robert B. Menschel ’51. The cross-disciplinary series brings to Syracuse University notable guest speakers of exceptional accomplishment who share their diverse global experiences and perspectives.