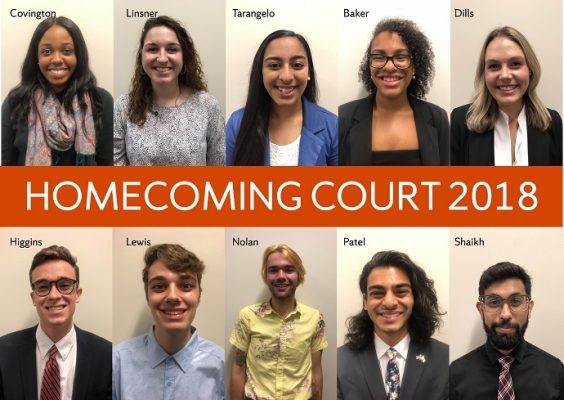 A longstanding University tradition, the Homecoming Court is composed of seniors who represent Orange spirit in their academic, co-curricular and community involvement.

Campus community members with a valid NetID can cast their vote for the Orange Central Homecoming king and queen via the online Homecoming Court ballot until Friday, Oct. 19 at 11:59 p.m. Homecoming Court Royalty will be crowned at the University Union and Traditions Commission Homecoming show on Saturday, Oct. 20, in Goldstein Auditorium.

Majors: Policy Studies
Hometown: Atlanta, Georgia
“RA, TA, mentor, Greek life member, numerous E-board position holder, and advocator. These are the roles I’ve held along with some of my fellow Orangemen. I believe I would make a good Homecoming Queen because I understand that these roles make SU pride what it is, and I am an exemplification of that pride.”

Majors: Writing Studies, Rhetoric and Composition
Hometown: Bowie, Maryland
“I’ve leveraged my time at Syracuse to network across communities and unite people across shared experiences. I’ve used my voice to highlight marginalized experiences and I’ve taken the time to build genuine connections with my peers and classmates. I would make a great Queen because I’m dedicated to keeping the connections between our Orange family viable, strong, and healthy.”

Majors:  Television, Radio, and Film
Hometown: Toledo, Ohio
“I would make a great Homecoming Queen because I am Syracuse’s biggest fan and have been extremely involved in the student organization scene for three years. As an active member of First Year Players, CHAARG, OttoTHON, Danceworks, Orientation Leaders, and Phi Sigma Sigma, I can bring the spirit of Orange Central to my organizations and encourage celebrating being Orange all together!”

Major: Television, Radio & Film
Hometown: Holliston, Massachusetts
“At SU, I’ve strived to foster environments where everyone can be their most authentic selves, discover confidence and dance their heart away. I’ve loved helping students find their home as an orientation leader and U100 tour guide. My involvement in OttoThon, Zamboni Revolution and Delta Kappa Alpha has empowered me to create fun and uplifting content that brings people together.”

Major: Physics, Applied Mathematics
Hometown:  Freehold, New Jersey
“I’m a physics and applied math major, and in my spare time, I’m involved in a variety of groups including the marching band, FYP and even the mathematics honor society. I work tirelessly to make this school a home for everyone that attends; my philosophy is that I want to leave Syracuse better than I found it.”

Majors: Advertising, Citizenship and Civic Engagement
Hometown: Clifton Springs, New York
“Hi! I’m Audra, a 315 native who grew up bleeding orange. Syracuse was and is my dream school and I’d love to convey this passion through Homecoming Court. My enthusiasm for all things ’Cuse translates to roles on campus like Otto’s Army President (the student section), the Daily Orange, OrangeSeeds and being a Remembrance Scholar.”

Major: Communication, Rhetorical Studies/English and Textual Studies
Hometown: Pittsburgh, Pennsylvania
“Fun, flirty and approachable. Not looking for anything serious, just want to be crowned your Homecoming monarch. Big fan of Lady Gaga, sunsets and intersectional feminism. I am the president of Pride Union, EIC of The OutCrowd, SMC of the Kumquat and the chair of Diversity Affairs for SA. Here for a good time, not a long time.”

Majors: Public Health, Biology
Hometown:  Manhattan Beach, California
“Hailing from Los Angeles, I set out to have the most fulfilling time at ’Cuse. I emceed Own the Dome, studied public health in South Africa, became an Orientation Leader, conducted research in biology and made incredible friends along the way. I want to encourage others to pursue their dreams here and make the most out of that tuition money!”

Major:  Aerospace Engineering
Hometown: New York City, New York
“A true New Yorker who won’t sleep unless he sees everyone flourishing. Over the past three years, I have had 144-plus residents and pseudo-residents with whom I’ve tried to create a culture of caring and understanding. I’ve interacted with hundreds of people through my multiple jobs on campus and just wandering around seeing who needs help. I’m here for you.”

Major: bioengineering
Hometown: Encinitas, California
“When I give campus tours, people say I’m crazy leaving San Diego for Syracuse; I may be crazy but it’s all worth it. I’ve been able to thrive on this vibrant campus by making music with FYP and SU Bands, starting a company (#In-Spire), volunteering with the Shaw Center, spreading passion for STEM, and much more. Syracuse has given me the opportunity to make a difference by sharing my energy (and puns), and to be a part of something bigger than myself—the Orange family.”