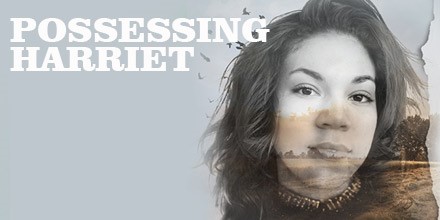 Powell was enslaved to a family named Davenport, originally from Central New York who had relocated to Mississippi. In 1839, Powell accompanied the Davenports on a return visit to Syracuse. While staying at a hotel called Syracuse House, Powell met a free black man named Thomas Leonard. With Leonard’s help, Powell slipped away from the Davenports and connected with local abolitionists, including Gerrit Smith, who facilitated her escape to Canada. It was from Smith’s home in Peterboro, New York, that Powell embarked on the final leg of her journey to freedom.

“Possessing Harriet” focuses on the brief and perilous time that Powell hid from slave catchers at Smith’s home. History records that while there, Powell met Smith’s young cousin, Elizabeth Cady, later Elizabeth Cady Stanton, outspoken advocate for women’s rights. The details of that meeting, though, are scant, a brief mention in Stanton’s autobiography. In “Possessing Harriet,” playwright Bass imagines their conversation in dramatic terms.

“That was the starting point,” Bass says. “Elizabeth Cady and Harriet Powell were the same age when they met, 24. Young women of their time, in very different circumstances, I wondered, what would I want to hear them talk about? How would that go?”

In addition to being the same age, Powell and Cady had “virtually the same skin complexion,” Bass explains. Powell was known as the “Fair Lady Fugitive,” an irony that adds complexity to Bass’ account of their meeting.

“Possessing Harriet” takes place in real time. Bass described it as a play that unfolds in “three conversations and two arguments” among four characters. At times, Smith and Leonard join Powell and Cady in the attic hideout. As night falls and the slave catchers draw closer, Powell is forced into a reckoning with the emotional consequences of her decision.

“We are so proud and excited to present this world premiere as the second show in our season,” says Syracuse Stage Artistic Director Robert Hupp. “This is an important story to tell today for our community and our world.”

“Possessing Harriet” also marks the return of director Tazewell Thompson, who served as Syracuse Stage’s artistic director from 1992 – 1995. Thompson says he is pleased to be returning to Syracuse Stage to direct this production. He says “Possessing Harriet” is a play for “our time, filled with friendship, loyalty, courage, hope and doing the right thing for a culture not your own, attributes that are missing across the country today.”

With the local connection so prominent in the play and production, Syracuse Stage has scheduled five post-show discussions featuring representatives from the theater and the Onondaga Historical Association.