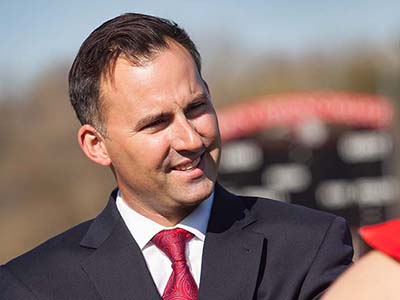 The College of Arts and Sciences (A&S) continues to build administrative efficiency with the appointment of a director of operations and administration.

“Matthew brings extensive experience to A&S in managing the day-to-day functions of a successful liberal arts college,” says Ruhlandt, referring to Kennedy’s previous tenure at Bryn Athyn College, north of Philadelphia. “He understands the structures, procedures and policies needed to support the smooth running of many units. Matthew is a key member of our senior management team.”

Kennedy is excited to build on his experiences at Bryn Athyn, where he served in variety of progressing roles. He began in 2010 as director of athletics, charged with developing a growth plan that was part of the college’s strategic initiative. In late 2015, Kennedy became vice president for business development and athletics. Two years later, he moved away from his athletics-related duties to focus solely on Bryn Athyn’s daily operations as vice president of operations and business development.

The former psychology major says he takes a strategic approach to operational efficacy.

“Everything I do supports the A&S Academic Strategic Plan,” says Kennedy, who began his career as assistant athletic director of Neumann University, where he also earned a master’s degree in strategic leadership. “Only by enhancing our infrastructure can we promote academic, professional and personal growth. This, in turn, engenders pride in A&S and fosters a culture of success.”

In addition to overseeing the planning and implementation of the college’s strategic initiatives, Kennedy manages a variety of nonacademic programs, including ones benefitting student retention and the undergraduate experience.

“As the largest academic unit on campus, A&S accounts for more than a third of the University’s undergraduates. We provide services that support their transition to college, increase retention and decrease their time to graduate,” says Kennedy, who recently earned a certificate from Harvard University in management and leadership in higher education. “To do this, we must help faculty and staff deliver the best student experience possible.”

The excitement for growth at Bryn Athyn assisted Kennedy and the administration to raise more than $45 million for capital projects and growth initiatives during his eight years there.

Before that, Kennedy led Neumann’s $1.8 million athletic department through a rebranding process, as well as created the university’s first student-athlete monitoring program.

“Matthew knows how to identify, promote and implement strategies that improve institutional effectiveness,” Persin says. “I am excited to help him drive growth in revenue, while fulfilling our academic vision.