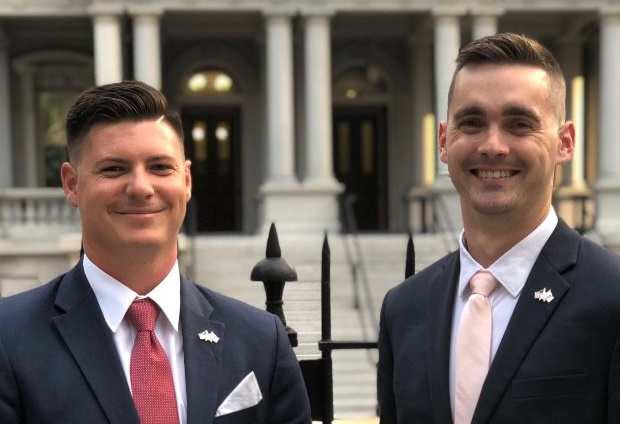 Syracuse University student veterans Nicklaus Brincka and Jonathan Quinlan were recently named to the 2018 Student Veterans of America (SVA) Leadership Institute class and were among just 100 other recipients nationwide who attended the institute Sept. 20-23. Those selected exhibit extraordinary academic, extracurricular and personal strengths.

The keynote presenter, Mike Haynie, vice chancellor and executive director of the Institute for Veterans and Military Families (IVMF), spoke at the institute about leadership through action and empathy.

“Being selected to participate in the SVA leadership class is a true testament to Nick and Jonathan’s service and ambition,” says Haynie. “They are representative of the veteran and military-connected students that we have here at Syracuse University and we are honored to have them as a part of our campus community, as well as members of the IVMF and Office of Veteran and Military Affairs team.” 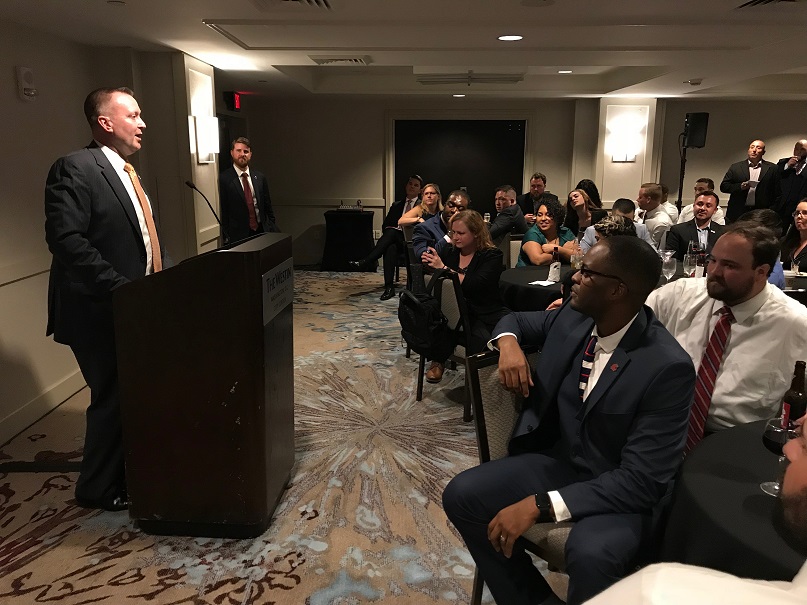 Mike Haynie, vice chancellor and executive director of the Institute for Veterans and Military Families, spoke at the institute about leadership through action and empathy.

Hosted in Washington, D.C., at the United States Chamber of Commerce, the highly selective program brings student veterans together for a three-day intensive leadership immersion program sponsored by Prudential. It was the SVA’s 7th Annual Leadership Institute.

“To be selected to their prestigious class of fellow student veterans is a true privilege,” says Brincka. “Being among successful student veterans was inspiring and motivating, and I was really proud to represent Syracuse and grateful to the Office of Veteran and Military Affairs for this opportunity.”

“Learning from my fellow veterans in D.C. gives me great perspective as I move toward my degree,” says Quinlan. “Having the opportunity to share knowledge and get guidance from those who have come before me is a game-changer. I’m grateful to IVMF for the opportunities to learn, to network and to impact the lives of veterans and their families every day as they transition to civilian life.”

Identified as leaders in their SVA chapters, campuses and communities, participants including Brincka and Quinlan were mentored on the importance of leadership behavior, personal branding, how to deliver results and foster relationships. Mentors included SVA alumni with at least 10 years of professional experience and guest speakers include leaders in higher education, government, veteran organizations and business.

Brincka and Quinlan, along with their fellow recipients, represent the most diverse and academically successful class in SVA’s decade of service, with the average GPA of the class at 3.42.

Quinlan, a United States Marine Corps veteran, completed five years of active duty service and continues to serve in the Marine Corps Reserves. After retiring as a sergeant, he moved back to Syracuse, New York, with his wife and daughter, and began dual degrees in finance and entrepreneurship/emerging enterprise at the Martin J. Whitman School of Management. Quinlan has taken on roles as the academic and financial opportunity liaison for the Student Veterans Organization and a program advisor for the IVMF.

Originally from Sacramento, California, Brincka enlisted in the U.S. Army at the age of 18. He served four years with assignments at Fort Drum, New York; Fort Huachuca, Arizona; Fort Campbell, Kentucky; Camp Bullis, Texas; Fort Polk, Louisiana and Quantico, Virginia. He is a Green to Gold scholar at Syracuse University in the Whitman School of Management, pursuing a degree in accounting. On campus, he works at the IVMF, is an active participant in Army ROTC and will commission as an officer in the National Guard when he graduates in 2020. In the Guard, he hopes to serve as a military intelligence officer while also pursuing a career as a certified public accountant. He is also involved in the Beta Alpha Psi professional accounting fraternity, serves as alumni relations chair for the Phi Kappa Psi Fraternity, is a member of the rugby club and serves as a Morning Brew campus ambassador, president of the Stalwart Battalion Cadet Association and a student veteran peer advisor. He is also an active member of the Student Veterans Organization.