The Haudenosaunee Wooden Stick Festival, Saturday, Sept. 29, and Sunday, Sept. 30, celebrates the late Randy Hall, a member of the Akwesasne Mohawk Wolf Clan, with a box lacrosse tournament in his memory. Hall, a lifelong fan of lacrosse, died in January at age 72. 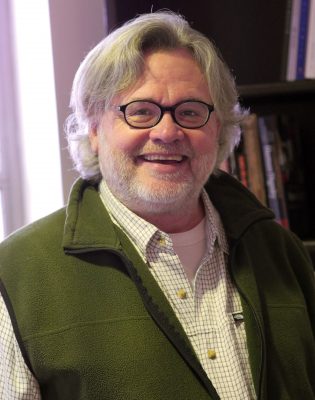 “He loved sports and was deeply involved with the Creator’s Game, what we call lacrosse, among different Haudenosaunee nations,” says Philip Arnold, associate professor and chair of the religion department in the College of Arts and Sciences and president of the Indigenous Values Initiative, the event’s sponsor. Arnold is former founding director of the Skä·noñh—Great Law of Peace Center. The Indigenous Values Initiative is a nonprofit organization that supports the work of Skä·noñh and other initiatives to educate the general public about the indigenous values of the Haudenosaunee.

“Randy asked me and my wife, Sandy Bigtree (also Mohawk), for help bringing the game back to Onondaga Lake,” Arnold says. “He gave us a leather ball that his team had won in a master’s tournament elsewhere in the Confederacy. At this event, we honor Randy and the origins of the game.”

The first Wooden Stick Festival was in 2013. The free festival returns to Onondaga Lake, sacred to the six nations of the Haudenosaunee (Iroquois) and birthplace of lacrosse, Dehontsigwa’ehs (“They bump hips”).

The Randy Hall Memorial Box Lacrosse Tournament will include 10 games beginning at 10 a.m. Friday at the Onondaga Lake fields and continuing Sunday at 10 a.m. Four teams will compete. The players will use a leather ball and are encouraged to use wooden sticks.

The festival, also at Onondaga Lake, runs 10 a.m. to 3 p.m. on Saturday and 10 a.m. to noon on Sunday. World-renowned lacrosse stick maker Alf Jacques, a member of the Onondaga Nation, will speak both days at 10 a.m. and 2 p.m. Social dancing and music will be at 1 p.m. both days.

“Over 1,000 years ago the game was first played at Onondaga Lake to help bring five warring nations together in peace,” says Tadodaho Sid Hill, the traditional leader of the Onondaga Nation and the six-nation Haudenosaunee Confederacy. “CNY has benefited from this rich legacy, and as a result this area is a hotbed for lacrosse.”

Nearly one million athletes in the United States play lacrosse today, and the game continues to be the fastest-growing sport in the world, according to US Lacrosse. “Unlike other sports, lacrosse offers us a unique educational opportunity to teach these Haudenosaunee values to young athletes and enthusiasts,” Arnold says.

Hall was born in Massena, New York, and grew up in Syracuse. He served in the U.S. Army in Vietnam from 1965-68. He was among about 500 Native Americans who participated in the 1972 American Indian Movement takeover of the Bureau of Indian Affairs in Washington, D.C. That action followed the cross-country Trail of Broken Treaties, intended to bring attention to issues including living standards on reservations and Native American sovereignty and treaty rights.