“I don’t think my life would have turned out the way it’s turned out if I hadn’t gone to Syracuse.” These were the words of Steve Kroft ’71 during the WAER Hall of Fame Induction ceremony on Friday, Sept. 14.

In a celebratory event held at Syracuse University’s Lubin House in New York City, both Kroft and Len Berman ’68, G’70 were inducted into the WAER Hall of Fame, joining the likes of Bob Costas ’74, Ian Eagle ’90, Lakshmi Singh ’94, Mike Tirico ’88 and several others. Both Kroft and Berman are accomplished alumni who began their long careers at SU and WAER. 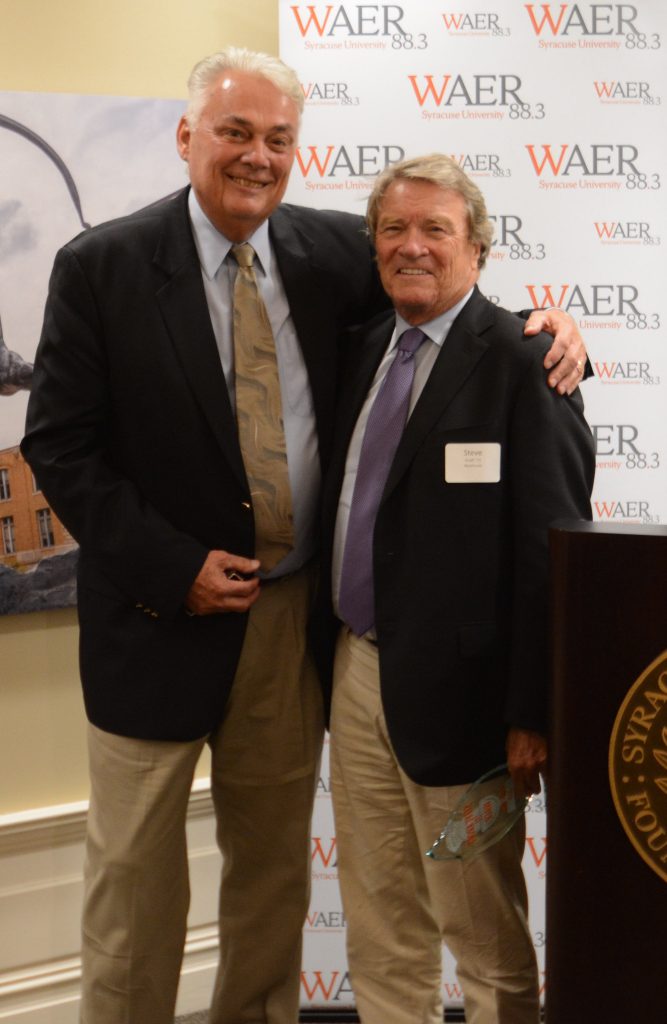 “Steve and Len represent the best of Syracuse University and the rich tradition of WAER,” said Joe Lee, the station’s director and general manager. “The Hall of Fame event gives us an opportunity to engage and celebrate our unequaled legacy of college broadcasting.”

Berman is an eight-time, Emmy Award-winning broadcaster and New York Times bestselling author with a career that spans more than 50 years. A six-time New York Sportscaster of the Year award winner, he is the creator of “Spanning the World,” a monthly collection of sports bloopers, and “Sports Fantasy,” a show that pitted regular viewers against sports stars, both of which aired on NBC.

Recalling how he got his start in broadcast journalism, Berman noted that he walked into WAER as an undergraduate wanting to be a disc jockey and ended up reading sports scores over the air on Saturday nights. He attributed his success, and the reason he was accepting an award, to what he called “The two pillars of my life”: WAER for guiding his career and his wife, Jill, and family for their unconditional support.

Kroft is widely known for his work on the nation’s most-watched television news program, “60 Minutes.” During his 28 seasons as a correspondent, he has won five Peabody Awards—two of which he earned in the same year; numerous Emmy Awards; and the DuPont Columbia University Journalism silver baton, television journalism’s highest honor, twice. Kroft has conducted interviews that are timely and widely debated, such as his exit interview with former President Barack Obama and a rare interview with Recep Erdogan, the president of Turkey, during policy disagreements between the United States and Turkey.

For the WAER and Newhouse alumni in attendance, the evening was one of reconnecting and reminiscing with a room full of talent. Adam Zucker ’98 served as master of ceremonies. Zucker is a studio host for CBS Sports and CBS Sports Network, hosting “College Football Today,” “Inside College Football,” and “Inside College Basketball,” and providing in-studio updates during the NCAA Tournament. 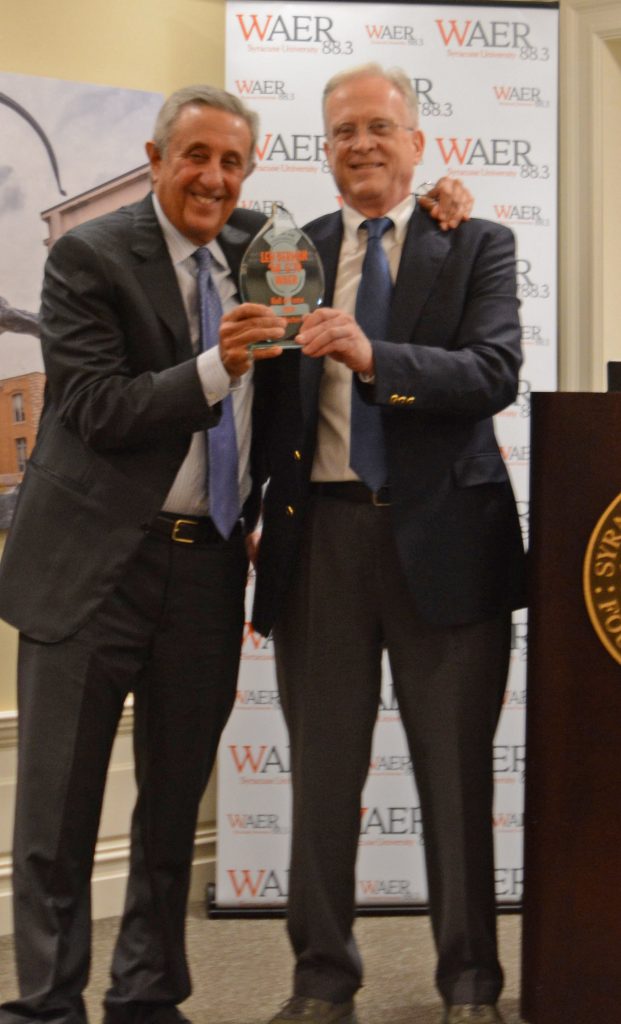 Dugald Gillies ’68 presented the award to Berman. The two had been roommates in Lawrinson Hall as undergraduates. During his career, Gillies worked in broadcasting in Buffalo and Syracuse, served as a public affairs officer in the Navy, and headed SU’s Paul Greenberg House in Washington, D.C.

Presenting to Kroft was John Nicholson ’68, who similarly to Berman and Gillies, was roommates with Kroft at Syracuse. Nicholson is a Newhouse professor emeritus who has taught and advised more than a thousand students, several hundred of whom got their start in news and sports at WAER. He is the founding director of the Newhouse Sports Media Center and has more than 50 years’ experience in news, sports, production and teaching.

Jack Myers ’69 underwrote the event. Myers is a board member emeritus of the Newhouse School, author, founder, documentary filmmaker and leading media economist. He has advised hundreds of corporations on media and technology trends and is the recipient of a George Foster Peabody Award, as well as an Academy and Emmy Award nominee for Best Documentary Feature.

About WAER
WAER is a commercial free, listener-supported public media organization licensed to Syracuse University. Founded in 1947, WAER serves the greater Syracuse area with NPR and local news, eclectic music and SU sports. WAER is staffed by full-time professionals who train, educate and supervise student volunteers interested in enhancing their academic experience in broadcast journalism and sports broadcasting. WAER content is available on 88.3 FM and HD, HD2, WAER.org and via mobile app for iPhone and Android operating systems.