Over the weekend nearly 3,000 military service members, veterans and their families from the Syracuse area and Fort Drum were honored at the Syracuse vs. University of Connecticut football game for their service during the annual Military Appreciation Game.

“We want to thank the entire Syracuse community, who continues to embrace and support veterans and military-connected members of the community,” says Executive Director of the Office of Veteran and Military Affairs Ron Novack. “Veterans, service members and military families make significant sacrifices for our country. It is important we take the time to recognize them and thank them for their service to our nation on a large stage and there is no better place than in the Carrier Dome.” 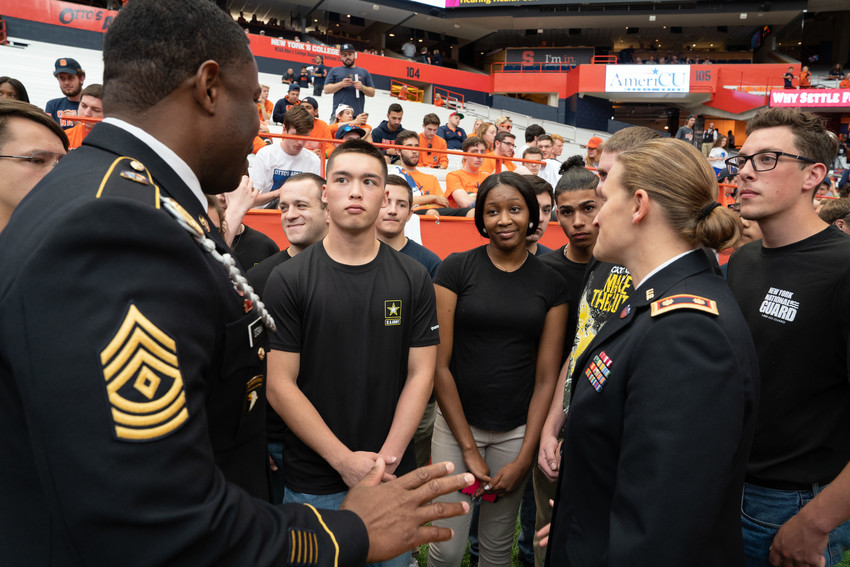 Syracuse University Athletics and the Office of Veteran and Military Affairs partnered to coordinate military-related activities before and during the game, including:

Veterans at the tailgate attended the game free of charge following the annual ‘Cuse for Troops ticket promotion which allows the public to thank veterans and active duty service members for their service by sponsoring their attendance to the game.

The Annual Stars and Stripes tailgate and military appreciation game is part of a series of programs and initiatives in support of Syracuse University’s commitment to veterans, military service members and their families in order to strive to remain the “best place for veterans.”

The objective is supported by a series of strategic initiatives, including the creation of the Office of Veteran and Military Affairs, IVMF, expanded capabilities of the Office of Veteran Success and construction of the National Veterans Resource Center, a first-of-its-kind multi-use facility dedicated to advancing academic research, programming and community-connected innovation serving the social, economic and wellness concerns of the nation’s veterans and families.