Christopher Crooker has been appointed assistant dean for advancement at the Whitman School. 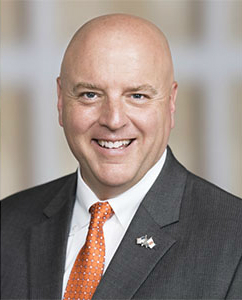 With more than 21 years of experience in alumni affairs and development, Crooker has a track record of engagement and advancement success. Prior to joining the Whitman School, he held a series of progressive roles at Cornell University. As assistant dean of alumni affairs and development at Cornell’s School of Industrial and Labor Relations for more than a decade, he built a thriving and sustainable development unit.

Most recently, Crooker was assistant vice chancellor for development at the University of Massachusetts at Amherst, where he helped lead the university’s fundraising team in completing a university-wide campaign.

He holds a bachelor’s degree in history and a master’s degree in professional studies in industrial and labor relations, both from Cornell University. He was a four-year Naval ROTC Scholarship recipient and subsequently served six years on active duty and nine years in the reserves as a commissioned officer in the U.S. Navy.

Crooker and his wife, Carla, live in Ithaca, New York.