University Professor John L. Palmer, former longtime dean of the Maxwell School, and his wife, Stephanie G. Palmer, have made a major gift commitment to the school that will create an endowed fund supporting Maxwell professional master’s students, with an emphasis on financial aid and career development services. The gift, when fully realized, is expected to be about $2 million, in the form of two already-established charitable trusts and funds from their estate. 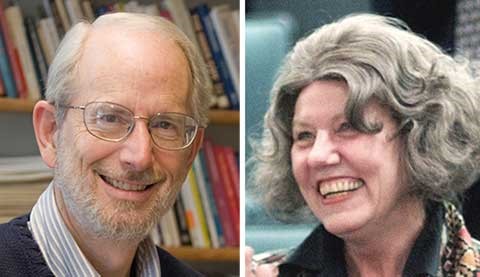 The Palmers’ planned gift will complete a remarkable legacy of giving by the couple, and giving by others in their honor. It follows a $1-million-plus fund established by members of the Maxwell Advisory Board to honor John upon his retirement from the deanship in 2003; that fund supported assistantships for Ph.D. students across the school. The Palmers’ current, ongoing philanthropy is already providing annual support for many of the same programs targeted by their planned gift commitment.

In recognition of their support, Maxwell recently renamed its career center the John L. and Stephanie G. Palmer Career Center.

“Few people have done more for the students of the Maxwell School than John and Stephanie Palmer,” says Dean David M. Van Slyke. “In its specific emphasis on students and their post-Maxwell trajectories, the John L. and Stephanie G. Palmer Career Center is a fitting tribute to everything the Palmers have done for us.”

John Palmer was dean of the Maxwell School from 1988 until 2003 and was named a University Professor at Syracuse University as he retired from the deanship. He is an expert on federal fiscal and social welfare policy, and served two presidentially appointed terms as a public trustee for the Medicare and Social Security programs. He is a former senior fellow of the Brookings Institution and of the Urban Institute, and former assistant secretary for planning and evaluation for the Department of Health and Human Services.

He has published 13 books and dozens of professional and popular articles on a wide range of topics related to economic, budgetary and social policy concerns.

Throughout his career–and during his Maxwell deanship particularly–Stephanie has been a full and vital partner in John’s leadership roles.