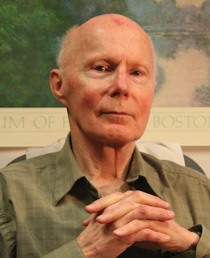 Roger Hahn approached life like a race—with passion and perseverance. Thus, when it came time for the beloved professor, also a fixture in the local running community, to hang up his sneakers, he did so with grace and dignity.

“He was brave, given the health challenges he faced,” said Coreen Steinbach, a decorated masters runner and award-winning artist, after Hahn’s death on Aug. 16 at the age of 86. “Of course, this surprised none of us.”

Hahn was the consummate teacher, whether in the classroom, in the lab or on the track. For more than 35 years, he taught organic and general chemistry in the College of Arts and Sciences (A&S) and advised countless graduate and undergraduate students.

Not even “retirement,” which began in 2000, seemed to break his stride. Hahn just changed up his game. An associate professor emeritus of chemistry, he maintained an active research program until his death, often supporting various postdocs. Witness multiple articles he co-authored as recently as 2015.

A&S Dean Karin Ruhlandt says Hahn left an indelible impression upon her in 1993, when she interviewed for a faculty position in the chemistry department. Delayed by a springtime snowstorm, an exhausted, sleep-deprived Ruhlandt thought she had bungled the interview. Then she met her future colleague.

“Talking to Roger was different,” recalls Ruhlandt, also a Distinguished Professor and former chair of chemistry. “He was waiting for me [at the interview] with a stack of science papers, eager to discuss research projects. Imagine my embarrassment when I forgot all about the papers, as I left for the airport. Roger came running after me with the papers, suggesting I read them on the plane. … He believed research was the key to advancing chemistry and knowledge, in general.”

Indeed, science was in his blood. Born and raised in Cleveland, Ohio, Hahn attended nearby Oberlin College. No sooner had he earned a bachelor’s degree in chemistry than he found himself in the trenches of South Korea, serving as a smoke generator specialist for the U.S. Army’s Chemical Corps. Tasked with defending against chemical, biological, radiological and nuclear weapons, the corps stoked Hahn’s interest in organic chemistry. He eventually parlayed a Ph.D. from The Ohio State University into a prestigious National Institutes of Health Postdoctoral Fellowship.

Hahn arrived at Syracuse in 1965, as the University was evolving into a research powerhouse. Now a husband and father, he wanted to hang out his shingle, play the long game. He set up shop in the Department of Chemistry then located in historic Bowne Hall.

In those days, chemistry was a small department with a growing reputation. Along with organic, inorganic and physical chemistry, faculty engaged in interdisciplinary teaching and research. This collaborative ethos, which Hahn helped foster, culminated with the department’s move into the Life Sciences Complex in 2008.

Hahn was enamored with the building blocks of organic synthesis. His work was rich and varied, finding applications in the development of pharmaceuticals, agrochemicals, pheromones and perfumes.

“The breadth of research opportunities in Roger’s lab reflected the highly synergistic nature of our research programs and provided an outstanding research environment,” says Timothy Korter, professor and chair of chemistry. “He also was a popular teacher who impacted thousands of students.”

Christopher Dietz was a postdoctoral research associate in Hahn’s lab. Dietz remembers him as a “great mentor, a proud father and grandfather, and an amazing person.”

“Every day, Dr. Hahn would walk into the lab and say one of two things: ‘Looks like progress,’ or ‘What do you have?’” remembers Dietz, an adjunct faculty member in Le Moyne College’s chemistry department. “The latter meant I was not moving fast enough for him. Roger ran track fast and expected his chemistry results in the same fashion.”

Hahn applied this singlemindedness to other aspects of his job. A voracious reader, he regularly kept abreast of the latest research. Colleagues marveled at his ability to comprehend and retain scientific articles, while appearing to sprint through them.

He was not an absent-minded professor—far from it, but he had his quirks. For instance, Hahn often fixed himself tea, only to leave it on the hallway water fountain. “The cup would stay there all day, while Roger sat in his office, indulging in the latest [scientific] literature,” Dietz adds. 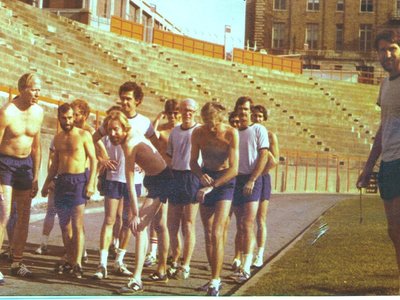 When not grading papers or toiling in the lab, Hahn unwound by running. More than a sport, he considered it a way of life. Hahn began running at age 15, and, through grit and determination, kept at it until three months before his death.

Hahn prided himself on being a charter member of the University’s Noontime Running League, which, for more than four decades, has organized weekly runs at Manley Field House. (Nick Wetter, former director of the University’s Department of Recreation Services, founded the league as the Faculty-Staff Joggers.) Hahn’s ability to inspire athletes of all ages and skill levels—a trait known as the “Roger Factor”—led to many winning teams, particularly during the 1990s and early 2000s.

One of Hahn’s recruits was Steinbach, who says he was a “force of nature.” “Roger was a learned man, devoted to his field and his sport. He always stayed on top of my competitions, knowing the results and how to advise me,” explains the longtime captain of the Noontime Runners.

Hahn occupied a special place in the lives of Patti Ford ’94 and Terry McConnell, co-commissioners of the Noontime Runners. Ford recalls Hahn’s “everyone counts” attitude, a trait that endeared him to nearly everyone he worked with in the classroom or on the track. “Roger was active with the Noontime Runners until this past spring, when his health began to decline,” says Ford, a budget manager in the Department of Physics. (McConnell, her husband, is professor of mathematics.) “Many of us remember the teams he captained or assisted with in the league.”

She and McConnell will participate in a public memorial service for Hahn on Friday, Sept. 14, at 3 p.m. in Hendricks Chapel.

Ford says her last memory of Hahn is from a recent meet at Manley, where he passed her the baton during the 3,200-meter relay. “Roger was such a pleasant and gentle man,” she says, adding that he was a secretary on the board of directors of the Syracuse Chargers Track Club, one of the largest running clubs in the United States. “I truly miss him.”

Stephen T. Murphy, professor emeritus of education and human development at the University of Southern Maine, used to run with Hahn in the 1980s and ’90s, when he taught at Syracuse. Murphy says Hahn was not just an excellent short-distance runner; he was a supportive training partner—one of the best.

“He was quietly friendly and humorous,” recalls Murphy, who admits to “trying to keep up” with Hahn during their weekly summer runs near Nottingham High School. “One night, after I struggled to stay with him on Peck Hill Road [in Jamesville, near the Syracuse campus], he thanked me for pulling him along. Roger said he sometimes needed a push to ‘respectably’ finish longer distances.” 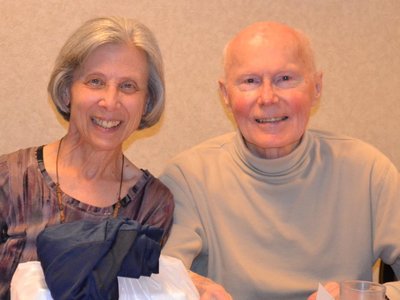 An avid outdoorsman, Hahn became interested in hiking in 1985, while honeymooning with his second wife, Estelle. They eventually became part of the Adirondack 46ers, a select group of people who have officially climbed the region’s 46 highest summits.

“Roger was a quietly fierce competitor when playing Scrabble with family and friends, and made everyone groan with cleverly bad puns,” a friend writes. “He also was a lifelong Cleveland Indians fan, and was excited to see them advance to the 2016 World Series.”

More than anything, Hahn was a family man. Everything took a backseat to Estelle, as well as their six children and eight grandchildren. “Most of our conversations reverted back to his family. He loved talking about his children, but always made it a point to get to know the people important to me,” Dietz adds.

Many of Hahn’s family members and friends plan to attend his memorial. One person who will not be there, however, is Steinbach, scheduled to compete in the 2018 World Masters Athletics Outdoor Championships in Malaga, Spain.

“I think Roger would give me a pass for that reason,” she smiles. “I will hold him in my heart as I represent the United States.”