PowerSpike, the leading influencer marketing and analytics platform for live streaming, announced this week a combined investment of $500,000 by The Sixers Innovation Lab Crafted by Kimball, Techstars Atlanta—in partnership with Cox Enterprises, Dorm Room Fund and other outside investors.

The Syracuse University startup–founded by Angelo Damiano ’18 (marketing management/entrepreneurship and emerging enterprises) from the Whitman School and Michael Paris ’20, communications design major in the College of Visual and Performing Arts–also won a spot in the prestigious Techstars Atlanta startup accelerator. Joining them at the Techstars Atlanta program is James Ransom ’17 (who graduated with a degree in finance from the Whitman School and information management and technology from the School of Information Studies), PowerSpike’s head of business development. 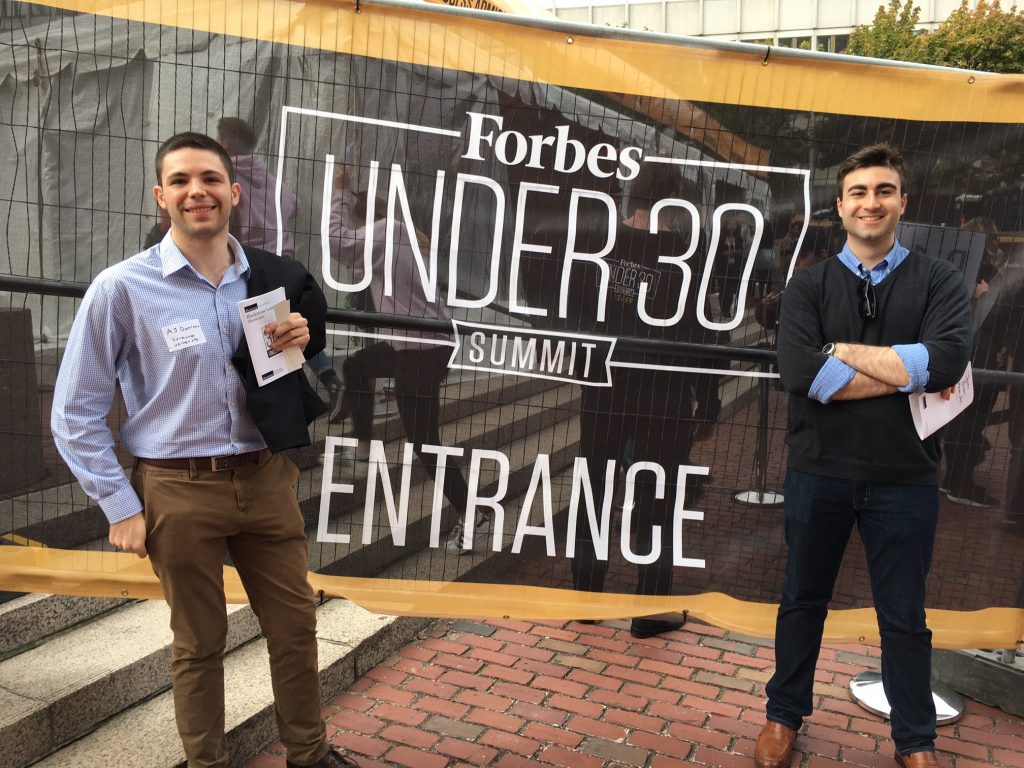 The seed funding, and mentorship through Techstars, will allow the company to quickly scale and hire a few additional developer job positions.

“The barrier of entry for live streaming influencer marketing has remained high for years,” says Damiano, PowerSpike’s CEO. “PowerSpike’s platform makes live streaming sponsorships measurable and verifiable. With the help of our new investors, we’re able to continue developing the technology that opens an entirely new growth channel for marketers and allows live streamers to make a living doing what they love.”

PowerSpike utilizes innovative marketplace and AI technology to help live-streaming influencers find and develop relationships with potential sponsors and allow brands to sponsor streamers to accelerate business growth with live-streaming influencer marketing. The platform allows streamers to apply to sponsorships from their favorite brands and provides them with a secure method of receiving payment for their work. For brands and marketers, the platform serves as a tool they can use to discover and hire new influencers and save time when communicating and managing existing talent.

“We’re excited to invest in A.J. Damiano and his talented management team. As former streamers, they’re acutely aware of the challenges PowerSpike aims to solve, and they are already on the right path,” says Seth Berger, managing director at Sixers Innovation Lab Crafted by Kimball. “Streaming is a rapidly growing space we believe will continue to explode.”

“PowerSpike sits at the intersection between two massive trends—the rise of influencer marketing as a key component of a brand’s marketing mix and the explosive growth of video game live streaming. We invested in PowerSpike because we believe A.J. and Michael have the grit and tenacity to take full advantage of this unique opportunity,” says Michael Cohn, managing director of Techstars Atlanta.

Damiano launched PowerSpike as a Syracuse undergraduate student, working with the Blackstone LaunchPad at Syracuse University and the Couri Hatchery at the Falcone Center for Entrepreneurship. As a student, he advanced to the nationals of the Global Student Entrepreneur Awards and won the top prize in the software/information technology division of the New York State Business Plan Competition. He won several SU competitions–including the Panasci Business Plan Competition, the Orange Tank Business Competition, the RvD iPrize and CompeteCNY–and participated in national events such as TwitchCon and BlizzCon, two of gaming’s biggest venues, growing his status as an industry influencer.

Since the launch of PowerSpike’s open beta in early 2017, more than 8,000 live-streaming content creators with a combined audience exceeding 20 million viewers have signed up to receive sponsorships, and prominent brands such as Soylent, Camp Mobile and Creative Labs have signed up to connect with streamers and build their live-streaming influencer marketing programs.

PowerSpike’s connection to Techstars was catalyzed by Damiano’s participation in the Blackstone/Techstars global venture pitch competition last fall. The competition came at the conclusion of a two-day Blackstone/Techstars Training Camp in New York City, an innovative program for collegiate entrepreneurs by the Blackstone Charitable Foundation. The program leverages the resources and intellectual capital of Blackstone, empowering entrepreneurs, generating job growth and supporting local communities.

Josh Aviv, founder and CEO of SparkCharge, also attended the Blackstone/Techstars Training Camp with Damiano. Aviv won the Training Camp Demo Day competition and was accepted into Techstars Boston, graduating from that program in spring 2018.

Blackstone Charitable Foundation and Techstars announced earlier this year that they are teaming to supercharge Blackstone LaunchPad, the preeminent campus-based entrepreneurship program. Beginning in 2018, Techstars, the worldwide network that helps entrepreneurs succeed, will provide Blackstone LaunchPad participants access to their network of more than 10,000 mentors, invitations to signature events, and access to world-renowned content and startup services. In addition, Techstars will help student entrepreneurs navigate the complex landscape of fundraising, job placement and recruitment.

“PowerSpike and SparkCharge are perfect examples of the transformational impact that Blackstone envisions Techstars will have on our LaunchPad program,” says Alisha Slye, global director of Blackstone LaunchPad. “Their content, mentorship and network will provide expanded access for more LaunchPad ventures to grow and scale. Blackstone applauds Syracuse University’s leadership and commitment to entrepreneurship in our growing global LaunchPad network, which we will now be able to scale to over one million students with Techstars’ support.”

“The Blackstone LaunchPad was a pivotal part of our success in the early days of PowerSpike,” says Damiano. “Partnering with amazing mentors to get critical early feedback and working alongside a community driven ecosystem of incredible student entrepreneurs was the magic that helped us to launch our company off of the ground and eventually get accepted into Techstars. Any student who is considering starting a business, or exploring an idea, should definitely take the first steps and walk through the LaunchPad doors. Without that support, we wouldn’t be here today.”

PowerSpike is the leading influencer marketing and analytics platform for Twitch, providing influencer sponsorship and management solutions and fan insights for the eSports space. PowerSpike was founded in 2015 by a group of former live streamers and content creators.

About the Sixers Innovation Lab Crafted by Kimball

About the Blackstone Charitable Foundation

The Blackstone Charitable Foundation was founded at the time of Blackstone’s IPO in 2007 with substantial commitments from the firm’s employees. Influenced by the enterprising heritage of the firm and its founders, the Blackstone Charitable Foundation is directing its resources and applying the intellectual capital of the firm to foster entrepreneurship in areas nationwide and globally. Through its investment expertise across several asset classes and geographies, Blackstone has a unique perspective on the global economy and a heightened understanding of how entrepreneurial activity is often the crucial catalyst in the growth of successful businesses, industries and communities.

Blackstone LaunchPad is a campus-based experiential entrepreneurship program open to students, alumni, staff and faculty offering coaching, ideation and venture creation support. It is modeled on a successful program originated at the University of Miami and was further developed and expanded by the Blackstone Charitable Foundation.

Dorm Room Fund is a student-run venture backed by First Round. Dorm Room Fund invests in startups run by student entrepreneurs. They have invested in more than 200 startups that have raised a total of $400 million across a variety of popular investors. For more information, visit dormroomfund.com.