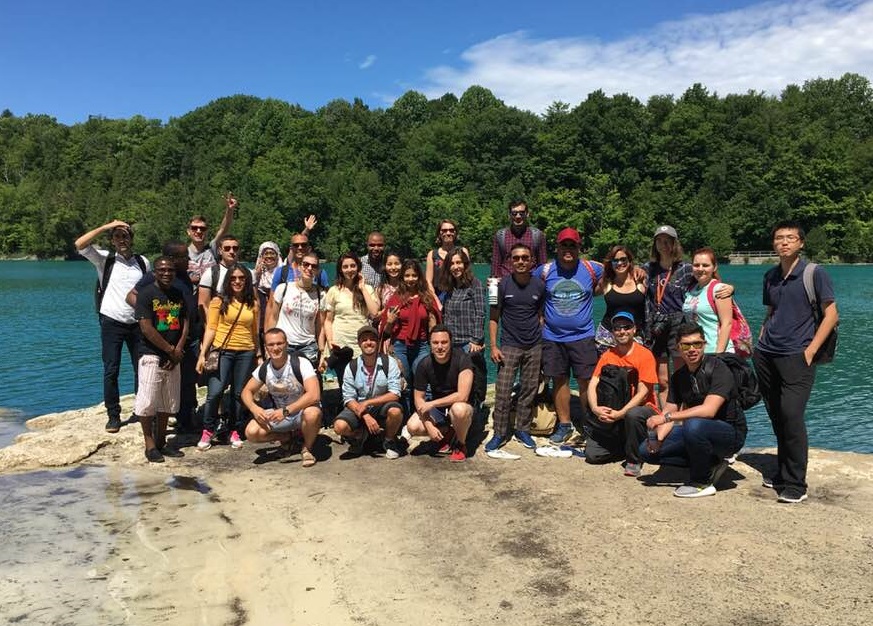 Dian Purwanti, from Indonesia, was most impressed with the clean tap water. For Cyrille Zongo, from Burkina Faso in West Africa, it was the clean streets. Rawan Badarna, from Palestine, was amazed by the technology and diversity.

These bright, motivated individuals were among the 37 Fulbright Scholars who arrived on July 14 for a four-week English for Graduate Studies program administered through University College’s English Language Institute (ELI).

Zongo says he could see how much more developed the U.S. was as soon as the plane landed in Syracuse. These differences are dramatic for many of the participants, who came from 23 countries, including Algeria, Brazil, Cambodia, Ecuador, Mongolia, Russia and Turkey. Most noticeable of all, Zongo says, is the hospitality. “People in Syracuse are very friendly and welcoming.”

This is the first year of a renewed five-year contract between ELI and the Institute of International Education, which manages Fulbright for the U.S. Department of State Bureau of Education and Cultural Affairs (ECA).

Participants are professionals who will remain in the U.S. to pursue graduate work following their Syracuse University sojourn. The ELI offers academic English, designed for students who are conditionally admitted to Syracuse University, students who wish to study at another university in the United States and professionals who would like to improve their English to better succeed in their careers.

While on campus, the students study a wide range of topics, including academic integrity, the U.S. political system, copyright laws and building a respectful environment. Interaction with their peers provides a glimpse into different cultures and faith traditions throughout the world.

The students took note of the teaching style they found in the U.S. “I was forced to share my opinion, discuss topics with my peers and work in a group,” says Purwanti. “It made me grateful to be in this program and prepared me for my graduate studies.” Purwanti will be staying on at Syracuse University to earn a master’s degree in teaching and curriculum in the School of Education.

“The academic rigor is very high compared to my country,” says Zongo. “This shows how effective and efficient the education system in the United States is and I’m glad I can learn though this system.”

Badarna notes that her classes were student-oriented and interactive. “Because the students were from different countries, my experience was much more enriching,” she says. “The instructor and student relationship is open and friendly–you can express your opinions and criticize politely. This improves a student’s critical thinking skills.”

When not in class or studying, the Fulbright students explored the rich history of Upstate New York. They participated in a guided tour of historic downtown Syracuse and visited Alexandria Bay.

Badarna was especially impressed with seeing a ship from Canada during a boat tour. “I was surprised to see how easy it is to move between two countries freely,” she says. “We don’t have freedom of movement in Palestine.” Badarna says that when she went to see her family in Palestine, she often had to go through checkpoints. “It’s difficult and time consuming to travel from one city to another, which discourages us from traveling.”

Purwanti says a highlight of her Syracuse visit was visiting Green Lakes State Park and Alexandria Bay. “My jaw dropped when I saw how clean every place is. I hope that someday Bali can be that clean.”

Zongo was struck by the beauty of Syracuse and the important role the city played in the history of the United States, particularly in the Underground Railroad. “The city has been able to keep symbols of important moments of Syracuse’s life. This is incredible,” he says.

The students admit that it was difficult to be away from family, but Bardarna feels much better prepared now to move on to Loyola University in New Orleans to obtain an MBA. She found the English Language Institute program to be comprehensive and holistic, blending instruction, socialization and engagement opportunities with American society.

Purwanti was a bit afraid that her Indonesian dress would isolate her from the other students on campus. “But all the people here greet you, even though you don’t know them. They are very welcoming. The people in my group are open to our culture and our differences, which made it easier to adjust.”

Zongo, who will be earning an M.B.A. at Rochester Institute for Technology, says “Syracuse University’s English Language Institute is the best. In a short period of time, they were able to teach us the essential English skills we need as graduate students. I was very happy with my experience here,” he says. “I will miss Syracuse.”