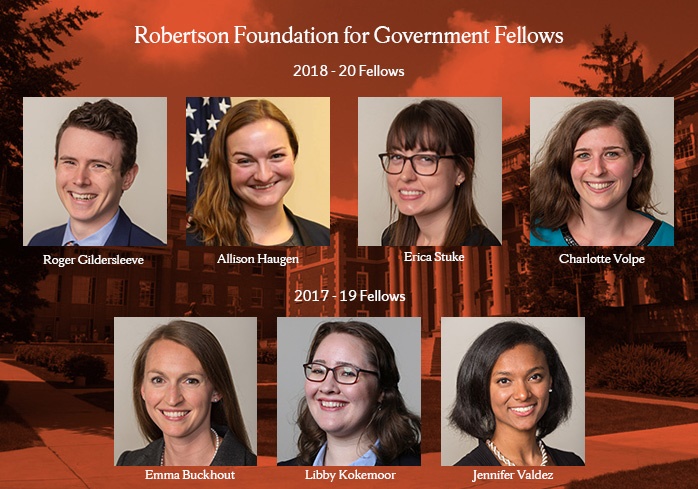 The Maxwell School has announced that four new Robertson Foundation for Government Fellows are among the 2018-19 cohort of master’s students in public administration and international affairs (M.P.A./IR) who began classes in July. They join three who started programs last year, bringing the total number of fellows to seven—the largest number of Robertson Fellows ever enrolled at Maxwell at one time. Their scholarship is made possible by generous grants from the Robertson Foundation as well as individual donors and a Foundation matching grant.

Of the seven, four are fully funded by the Robertson Foundation. A gift from University Professor Sean O’Keefe G’78 M.P.A. (also Phanstiel Chair in Strategic Management and Leadership) and his wife Laura co-funded one of the Robertson Fellows who started last year. Giving by alumnus Joseph A. Strasser ’53 (history), G’58 (M.P.A.) co-funds two of this year’s new Fellows.

The Robertson Foundation for Government’s mission is to inspire the best and brightest U.S. graduate students to pursue long-term federal government careers in foreign policy, national security and international affairs. Maxwell is one of five schools nationwide to which the foundation has provided grants to fund the education of exceptional students focusing on public service careers. Those grants cover full tuition for two years of study, plus a living stipend, health insurance and assistance in finding a summer internship. At Maxwell, recipients typically pursue a two-year joint or dual degree.

Roger Gildersleeve, one of the recently arrived Robertson Fellows, is a 2015 graduate of Virginia Tech University with a B.A. in geography. He has worked as a geospatial-data technician in the public sector and was, for two years, an English language teacher in Guangxi, China. While pursuing an M.P.A./IR joint degree at Maxwell, he plans to study the relationship between China’s environmental policies, foreign policy and national security. After completing his degree, he expects to enter the foreign service with the U.S. Department of State.

Allison Haugen will arrive in August to pursue concurrent M.P.A. and M.A. (economics) degrees, doing so as a Robertson/Strasser Fellow. She is a 2011 graduate of Washington State University (B.A., political science and Spanish) and earned an M.A. in Latin American and hemispheric studies from George Washington University (2015). Since July 2016 she has worked as a management specialist for the U.S. Department of State, posted in China. She has held various positions as well with the Foreign Service Institute, Organization of American States and Woodrow Wilson International Center for Scholars. With her Maxwell degree, she plans to return to the U.S. Department of State to serve as a foreign service officer.

Erica Stuke began work on an M.P.A./IR degree earlier this month, having graduated in 2015 from Hobart and William Smith Colleges (B.A., international relations and economics). Before arriving at Maxwell, she was a program assistant with USAID, in its Office of Food for Peace, where she helped process grant proposals for humanitarian projects. She foresees a career in international security and conflict management, with a focus on illicit financing of terrorism and the use of development as a tool for counterterrorism. She hopes to do this work at the U.S. State or Treasury departments.

Charlotte Volpe, also a Robertson/Strasser Fellow, has spent the past three years with InterExchange Au Pair USA, helping facilitate au pair placement in America. She has also taught English in Barcelona, Spain. A graduate of Columbia University’s Barnard College (B.A., history, 2014), she plans to take advantage of South Asian regional emphases at Maxwell, with the goal of focusing on that region as a foreign service officer with the U.S. Department of State or other internationally focused agency. At Maxwell she is pursuing an M.P.A./IR.

They join, from last year’s incoming class, the following students: