In the last episode of “Working: Syracuse,” a podcast that highlights stories of people living and working in the Syracuse area, hospice caregiver Annie Wilcox discusses what her job has taught her. 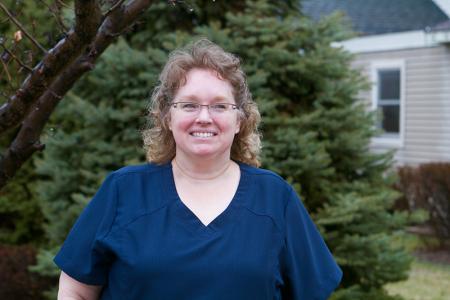 Annie Wilcox, a caregiver with Francis House who was featured in episode 14: The Caregiver

“People who are dying don’t want to sit around and wait to die,” she says. “They want to live until they do.”

The 14-episode podcast is the result of Multimedia Projects, a class offered to seniors and graduate students. Magazine students can use the class to complete their capstone project during their final semester at the Newhouse School.

The goal of the course was to create a podcast series with an accompanying website that includes other multimedia components, including photo and video.

This was no easy task, especially for a class that only met once a week during the spring semester.

Magazine and newspaper and online journalism chair Melissa Chessher taught the class with associate professor Adam Peruta, and the two embraced the challenge.

“We knew it would be a great undertaking to pull off a podcast and a companion website with multimedia features,” Chessher says, “but we had faith in the power of the idea and in the talent we knew the students possessed.”

Chessher says she and Peruta drew their inspiration from journalist Studs Terkel’s work. His 1974 book, “Working,” showcased workers in a multitude of industries, ranging from parking valets to business executives.

“It seemed logical that we would pursue people in the city that surrounds us, spend time with them, and seek to explore how they find meaning in the work they do to earn a living, which is exactly what Studs did,” Chessher says.

Peruta says he thought the concept would work well because of the different life experiences of the students.

“We came up with this idea that we thought was going to work because there are 20 people in the classroom and everyone has a different interest—different hobbies, different passions that they care about, so the Working: Syracuse theme could allow those students to explore an area they may be interested in,” Peruta says.

From the beginning, the professors wanted to create an environment that mirrored an actual newsroom, so they created leadership positions for which the students could apply. Students submitted a cover letter and résumé to the professors and then interviewed for the position they wanted. The executive editor worked as the editor-in-chief of the project, while the project manager helped keep the project afloat. Other positions included production editors and producers.

“Our subjects were chosen to reflect the diversity of Syracuse,” Benson says. “They all came from very different backgrounds and had varied views on why they and their jobs matter to the city.”

Each of the 14 episodes featured a Syracuse worker from a different industry, ranging from doulas to a crime-scene cleaner.

Peruta says he and Chessher devoted the first two classes of the semester to pitches. They met with the students prior to the start of the semester and told them to brainstorm 12 ideas to present.

“We tried to cover some industries that we thought were really evolving or changing in some ways,” Peruta says. “For example, we had some printing press guy. Who knows how long that printing press will be operating since everything is so digital?”

One of the unique challenges of the class, Peruta says, was that the majority of the students had no previous training in writing a script, which is different from writing an article for publication. This meant many of the scripts had to go through a multiple revisions.

Peruta also says students learned the value of interviewing and shadowing someone for hours at a time.

“When they are going out to interview the worker, the goal was to get very comfortable with the person so it wasn’t something that they would be able to go, bang it out in an hour and be ready to edit,” he says.

From start to finish, one episode took roughly 10 weeks to complete, with teams working on  multiple episodes at a time. Benson and his team spent many hours—including nights and weekends—working to ensure the final product was something they could all be proud of.

“We lived in the labs for the final few weeks of production,” Benson says. “What we were able to produce in such a short amount of time will hopefully be remembered for years to come. I’m grateful for Professors Peruta and Chessher for helping us grow as multimedia producers, which will surely be useful to us as we enter an industry that is constantly evolving.”

The podcast is available on the Working: Syracuse website and on other platforms, including iTunes, Google Play and Stitcher.

Story by Jamie Jenson, a graduate student in the magazine, newspaper and online journalism program at the Newhouse School