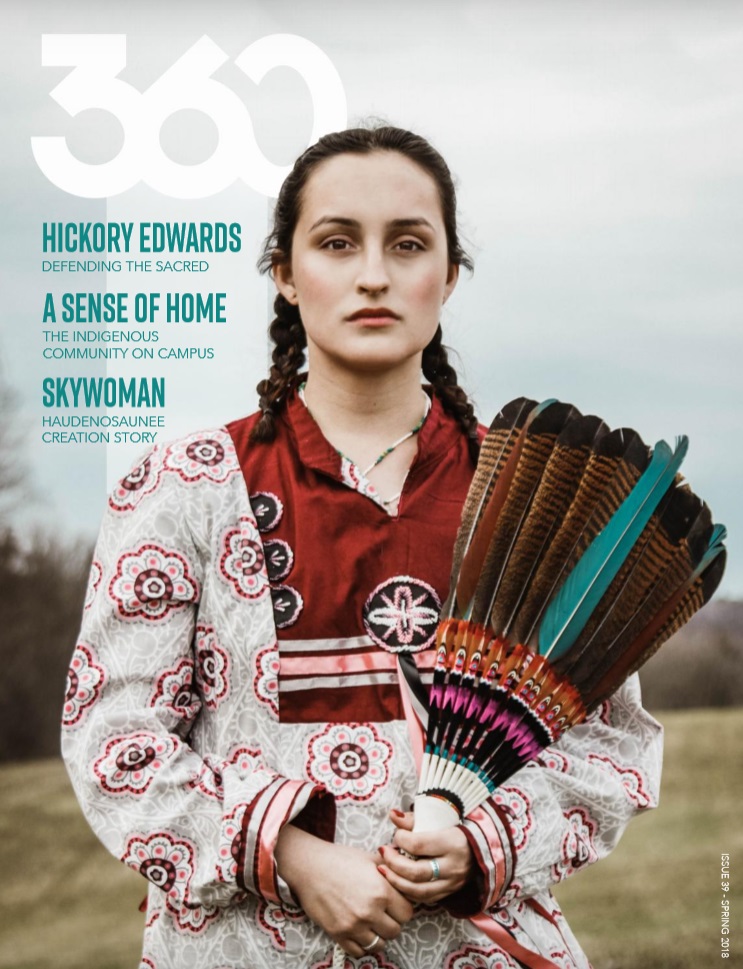 Editor in chief of 360 magazine Molly Bolan ’19 and the magazine staff had a special idea for the latest edition of their magazine.

They wanted to focus the entire edition on the history and culture of indigenous people and highlight indigenous students on campus.

“We come to Syracuse to meet people from different backgrounds,” says Bolan, a senior photojournalism and information technology student in the Newhouse School and the School of Information Studies, respectively. “There are still members of the indigenous population here, and so it’s really important for students to connect with the people and the culture that was here way before any of us were.”

But before they got started they needed help to make sure it was authentic and respectful.

Magazine staff members reached out to Kacey Chopito ’18, president of the Indigenous Students at Syracuse, to see if they could collaborate on the spring edition of the magazine.

Chopito and members of the student group were quickly on board with the idea—excited and appreciative of the opportunity.

“For a while the student group was kind of in our own little bubble,” says Chopito, who graduated in May with a history degree from the College of Arts and Sciences. “When I became president, one of the things I wanted to do was to reach out more and be more active on campus with other groups. This was the culmination of the work that I had done last year. Everybody was excited.”

Bolan first came up with the idea for the edition after hearing the introductory words that opened an event last fall in Maxwell Auditorium. 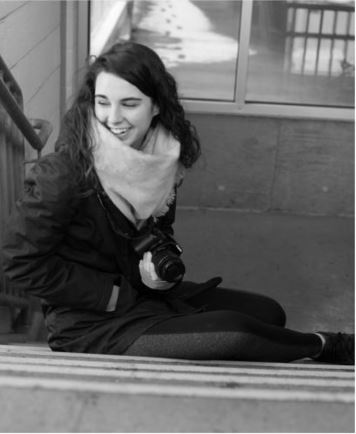 The host stated: “I would like to begin by acknowledging with respect the Onondaga Nation, the indigenous people on whose ancestral lands Syracuse University now stands.”

As part of the short-term recommendations by the University-wide Chancellor’s Workgroup on Diversity and Inclusion, the statement was developed in 2016 to acknowledge that the University sits on native land. The University distributed the statement to event organizers across campus for use at major public events on campus.

“I had heard that phrase before, but that was the first time when I really realized how much I didn’t know—and how really not good that was,” Bolan says. “There’s this whole city and community, and there’s so much history here; it’s easy for students to be caught up in campus life.”

Bolan pitched the idea to the magazine staff last fall, but their stories were already underway and they decided to keep it in mind for their spring edition. In the spring, it was a go and they made sure to reach out to the other student organization.

“It just made sense,” Bolan says. “So much of the history is already whitewashed we didn’t want to contribute to that to the best of our ability.”

After hearing back from Chopito with the positive response, the magazine staff and members of the Indigenous Students at Syracuse group met to brainstorm and review ideas.

“We had students come and talk about stories that they would like to see published and what they thought would be faithfully representative of what they wanted to say to the campus community,” Bolan says. 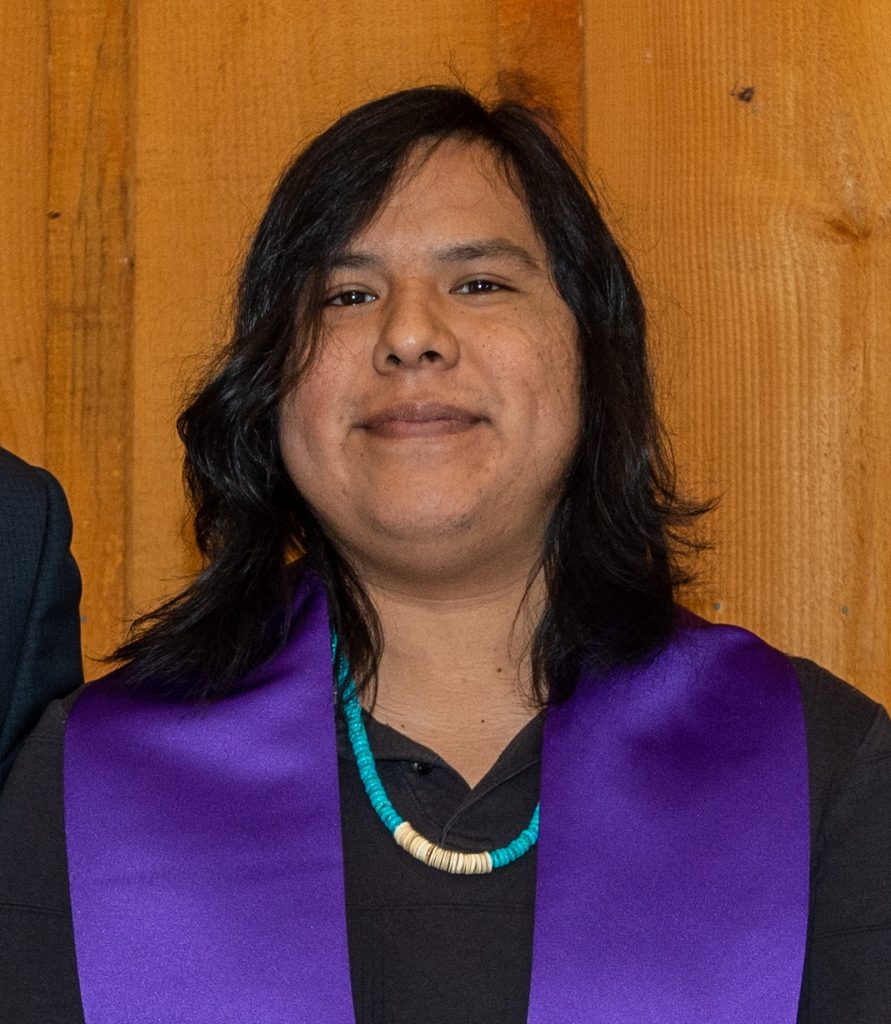 “That was a huge help having them there at our meeting—sharing ideas of what would work and what wouldn’t and what rhetoric to use and what words to avoid,” Bolan says. “Something that was really important was to highlight the really positive things that have come out of indigenous communities and populations.”

“One of the greatest things about journalism is that it amplifies the voices that are out there,” Bolan says. “For example, in the Q&As, these are students in our classes. You don’t know their stories; you don’t know the challenges they’ve faced, growing up and coming to campus. Their stories speak to the larger issues that are going on I think across the country and within indigenous communities.”

Both the collaboration with the 360 magazine staff and the opportunity to educate others on indigenous cultures were important to the Indigenous Students at Syracuse group. “This was a moment for us to share our history with the campus in collaboration with 360,” Chopito says.

Chopito contributed a piece on the history of indigenous and U.S. relations, something he’s researched and shared for most of his life. 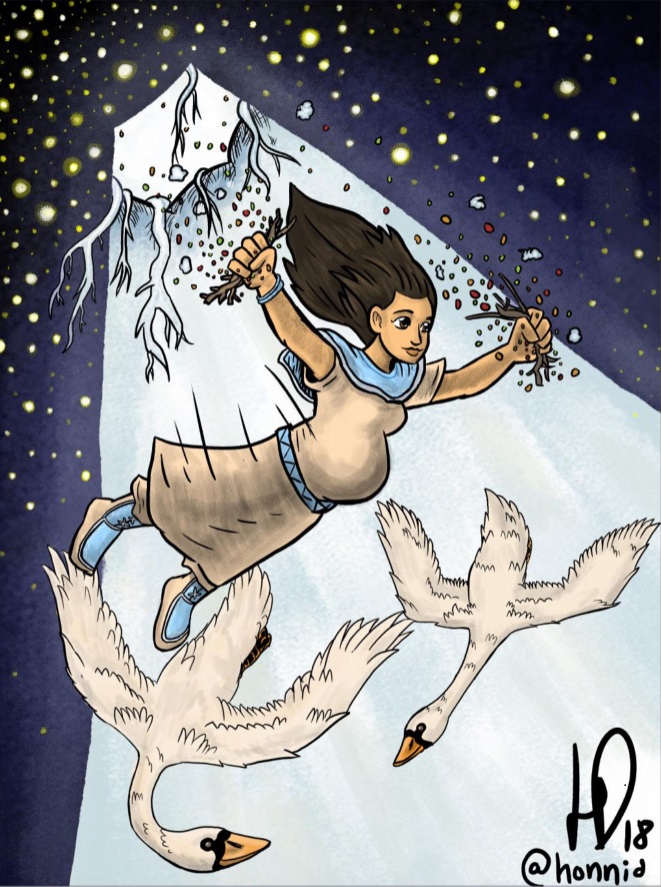 Illustration by Honni David ’17 for a story in 360 magazine

“To close the gap between indigenous people and non-indigenous people there has to be a form of education, and one of the most contentious points of education is history,” says Chopito, who is headed to law school to study federal law involving matters of Native Americans. “Especially here in the United States, where for the most part indigenous history is relegated to Thanksgiving and Pocahontas—beyond that there’s not much education in middle or high school and even in higher education. For the most part, this is a huge portion of the founding of the history of the U.S. that nobody really knows.”

Bolan and Chopito were excited about how it all came together and received a lot of positive feedback on the edition from students and professors.

The experience had a lasting impact on Bolan.

“All of the conversations we had, even what wasn’t published, the staff and I learned so much,” Bolan says. “I’m endlessly grateful for the organization and the experience to have worked with the students.”