When James T. Spencer, director of the Syracuse University Brass Ensemble (SUBE), turned to accept the applause at the 2018 Great American Brass Band Festival (GABBF) in Danville, Kentucky, he joked to himself, “Now what do we do for an encore?” 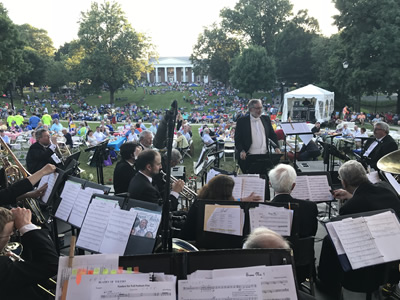 The Syracuse University Brass Ensemble on the lawn at Centre College. (Photo by Mary Kasprzyk ’03)

Granted, it was a rhetorical question, but one Spencer had wrestled with since last fall, when the ensemble accepted GABBF’s invitation to perform in June in the quaint, historic town, also home to Centre College.

“This has been a wonderful experience for us,” beamed Spencer backstage, after the group’s third and final concert. “We’ve proven to everybody, including ourselves, that we can hold our own with an international group of bands.”

Craig Elwood G’90, SUBE’s associate conductor and Flugelhorn soloist, echoed these sentiments a few hours later, over a celebratory meal at Lexington’s Blue Grass Airport. “Jim is the nicest guy, and I think we would do almost anything for him,” he said, still brimming with sweat. “Why else would we go to the time and expense of coming here—and playing for free? Maybe we’ve learned how far we’re willing to go, literally, to give a great performance.”

Now in its 31st year, SUBE is the permanent ensemble-in-residence in the College of Arts and Sciences (A&S). The group is a fixture at many campus functions, including convocation; Commencement; and the “Holidays at Hendricks” concert, which reaches tens of thousands of fans throughout New York state and Southern Canada every December, thanks to public broadcasting.

SUBE also crisscrosses the state, usually on its own dime, to perform in all matter of churches, schools and theaters. Its popular blend of light classics, marches and show tunes is right out of the Boston Pops playbook, resulting in summer engagements at The New York State Fairgrounds in Syracuse and at Emerson Park in nearby Auburn. After Thanksgiving, audiences virtually set their watches by SUBE’s annual swing through Central and Upstate New York, in the run-up to the holidays.

“For many families, the summer and winter holidays—not to mention Commencement Weekend—are not the same without SUBE. We’re like an old friend,” explains Spencer, weeks later. “It is a responsibility we don’t take lightly.”

Recently, the 40-member group has been pushing the envelope, evidenced by some unique programming choices and its whirlwind trip to Danville. 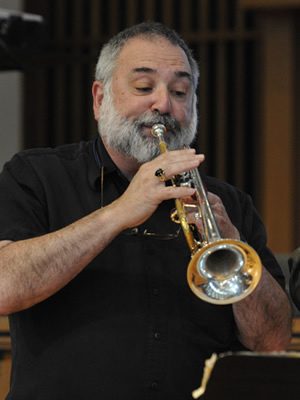 Co-founded by trumpet virtuoso Vincent DiMartino in 1990, GABBF is one of the preeminent festivals of its kind. Every summer, more than 40,000 music lovers flock to Danville—the self-proclaimed “Birthplace of Kentucky”—to experience the best in British- and American-style brass playing. This year’s lineup did not disappoint. SUBE members kibitzed with such heavyweights as renowned trombonist Wycliffe Gordon; Chris Martin and Mark Ridenour, principal trumpets of the New York Philharmonic and Chicago Symphony Orchestra, respectively; and various soloists with the U.S. Marine Band (“the President’s Own”).

SUBE was one of two brass bands from New York state (the other being the prestigious New York Staff Band of the Salvation Army) and was among a handful of community groups on the bill.

“SUBE is at the heart of where American music has been and always should be—in the community,” says DiMartino, who is the W. George Matton Professor of Music Emeritus at Centre, as well as a member of the Danville-Boyle County Planning & Zoning Commission. “There is something timeless and special about people from all corners of their community, coming together to play music. From moms and dads, to students and professors, to other university personnel, they take part in a group that makes common sounds, sometimes with no relationship to what they do professionally. SUBE’s concerts were my favorites of this year’s festival.”

High praise, coming from the two-time president of The International Trumpet Guild, who has soloed with the Boston and Cincinnati Pops, the U.S. Marine Band and some of the nation’s top orchestras. The Kentucky resident also fronts the eponymous DiMartino-Osland Jazz Orchestra (DOJO), a popular, Lexington-based big band that is a staple at GABBF’s annual Great American Picnic.

SUBE Board President and percussionist Mike Tyszko L’15 considers DiMartino one of brass music’s most ardent champions. “He is a visionary who has helped build GABBF into an institution,” says Tyszko, an associate at Syracuse-based Bousquet Holstein PLLC. “This year’s festival was magnificent, and we were honored to be among the nation’s elite brass bands. We also remain grateful to A&S, with its unwavering commitment to excellence in music performance, research and creativity.”

Of SUBE’s three outdoor concerts at GABBF, two were on the Main Stage on the bucolic Centre campus and one was in scenic Weisiger Memorial Park in downtown Danville.

Among the highlights of SUBE’s performances were two works by Anthony Philip Heinrich, a central figure in early 19th-century American music who began his composing career in Lexington. SUBE gave the local premiere of his concerto for English keyed bugle (a forerunner of the Flugelhorn), in addition to performing an overture to a 19th-century ball that was hosted by Maj. Samuel Smiley, a war hero from nearby Bardstown. 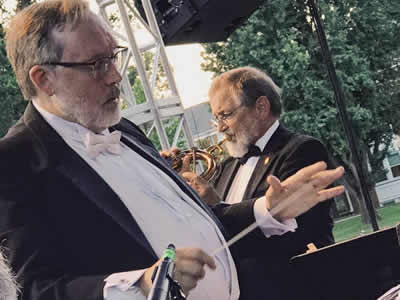 John Laverty, a retired professor in the College of Visual and Performing Arts (VPA)’s Rose, Jules R. and Stanford S. Setnor School of Music, arranged both pieces for SUBE. A native of Winchester, Kentucky, he worked closely with SUBE trumpeter Ralph Dudgeon to bring Heinrich’s music to life.

“Having settled in Kentucky, Heinrich was of special interest to me,” says Laverty, who studied trumpet with DiMartino at the University of Kentucky in the 1980s. “When I heard that SUBE was playing at GABBF, which I’ve been involved with for more than 15 years, I asked Jim [Spencer] to consider doing the concerto and the overture.”

Spencer was more than happy to comply, pointing out that when Laverty was Syracuse’s director of bands, DiMartino recorded four albums with the wind ensemble. “There were too many connections for us to ignore. It made sense to honor John Laverty and Anthony Heinrich, Kentucky musicians with two centuries between them,” says Spencer, a Meredith Professor of Chemistry in A&S.

One of the top historic trumpet players in the world, Dudgeon is an authority on the keyed bugle, whose popularity peaked before the American Civil War. He says the concerto—which goes by multiple titles, including the “Wildwood Troubadour”—was written during Heinrich’s salad days in London in the 1830s. For whatever reason, it was unperformed during his lifetime.

Dudgeon discovered the original version of “Wildwood Troubadour” in the Library of Congress in the mid-1970s. He made a piano reduction of the piece in 1977, and premiered it with an orchestra in Germany (near the Czech Republic border), a decade later. Since then, interest in Heinrich has continued unabated.

“The concerto initially appealed to European audiences because Heinrich emigrated from Bohemia to the United States, after the Napoleonic Wars,” says Dudgeon, a longtime resident of Homer, New York. “Listeners in Danville were equally receptive to our version, which is for soloist and brass ensemble.”

Adds Laverty, “It was a challenging project, but I was familiar with Heinrich’s music. I worked from Ralph’s original, handwritten score for orchestra.”

Dudgeon’s performance on a 195-year-old English keyed bugle (sans valves) added the allure. “His warm sound and virtuoso technique mesmerized the audience. It was unforgettable,” says Spencer, who composes and arranges for SUBE, as well.

Heinrich wrote his overture around 1820. Scholars think it has more to do with early American music than with that of Heinrich’s European contemporaries, given its theme-and-variations structure and sporadic chromaticism.

“Despite being a self-taught musician, Heinrich had a rather substantial career on both sides of the Atlantic,” says Dudgeon, referencing the composer’s hundreds of songs and many works for violin and piano. “He conducted the first American performance of a Beethoven symphony [Symphony No. 1] in Lexington and went on to help found the New York Philharmonic. Sadly, he died poor and mostly forgotten.” 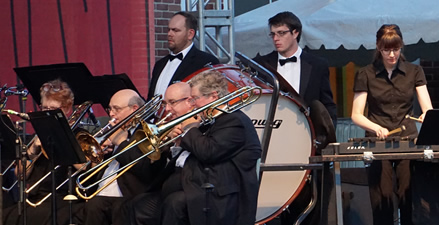 Along the way, friendships were forged and rekindled. DiMartino’s son, Gabriel, is no stranger to SUBE, having played in it when he taught music in VPA. In Danville, Gabriel sat in with not only SUBE, but also DOJO, featuring his dad and Wycliffe Gordon as soloists. “What a weekend,” recalls Gabriel, who is assistant professor of trumpet at East Carolina University. “It was like a homecoming—hanging out with good friends, taking in great music. I can’t wait till next year.”

Spencer’s daughter, Sarah ’12, even reclaimed her seat in the euphonium section—a reward, she says, for having recently earned a J.D. at the College of William & Mary. 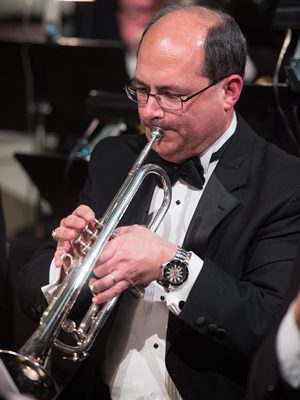 Few sacrificed more for the trip than Gary La Point ’79, G’87, G’17. An assistant professor of supply chain practice in the Martin J. Whitman School of Management, he oversees several programs, including the popular Singapore Summer Internship Program. Following a 29-hour flight from Southeast Asia, La Point touched down in Kentucky, only hours before hitting the stage. Forty-eight hours later, the trumpeter was airborne again.

“I was pretty tired,” recalls La Point in a master of understatement. “I love playing with SUBE, and did not want to miss the opportunity to highlight our group at this terrific festival. With students in Singapore, I had to get back there quickly. I was on the plane longer than I was onstage.”

Such dedication is de rigueur for members of SUBE, who faithfully rehearse every Monday night in Hendricks Chapel. Despite its academic-sounding moniker, the group boasts mostly faculty, staff and alumni. Elwood estimates that about half of the members are or have been band directors; the rest are doctors, lawyers and retirees. A few intrepid souls come from as far as Ithaca and Herkimer, often battling wintry driving conditions without so much as a complaint. “It’s a hearty bunch of musicians, with some understanding spouses,” he muses.

After a stint in VPA, SUBE has spent much of its existence in A&S, where the dean’s office helps with operating costs. Nobody gets any money, including Spencer, who donates hundreds of hours a year to rehearsing, recording and writing for SUBE. “It is a labor of love,” he admits.

The result? More than 250 pieces that have been professionally filmed, or recorded, or both for posterity. Some of them enjoy a second life on WCNY TV and radio (where host Bruce Paulsen often joins in on the fun as an emcee, narrator or singer); on the Internet; or on a myriad of CDs and DVDs.

With enjoyment comes responsibility. Spencer is particularly proud of SUBE’s commitment to new, original music. In the past decade, the group has commissioned works from Robert Ward, the Pulitzer Prize-winning composer who brought Arthur Miller’s play “The Crucible” to the opera stage, and Joseph Downing, associate professor and chair of music composition, theory and history in VPA.

“The piece may have been a little out of the audience’s comfort zone,” grins Spencer, who already is planning a trip to the 2019 Gettysburg (Pennsylvania) Brass Band Festival, “but that’s what music is about—pushing the limits, especially your own.”

A new exhibition at Syracuse University’s Sue and Leon Genet Gallery features Peter Piening’s dynamic abstract commercial work and his role as an educator. According to exhibition curator Meri A. Page, assistant professor of communications design in the College of…

Those strolling through the Kenneth A. Shaw Quadrangle may notice a new addition to the landscape this week, as the first phase of a new Onondaga Art Installation—led by the Indigenous Students at Syracuse (ISAS), Native Student Program, Ongwehonwe Alumni…

La Casita Cultural Center hosted a reception Sept. 18 for the opening of a new exhibition, “Corazón del Barrio (Heart of the Barrio),” celebrating the center’s 10th anniversary. The exhibition’s opening reception, held in person and via Zoom, coincided with…

Syracuse Stage is back. With the opening of Jonathan Spector’s timely play, “Eureka Day,” Syracuse Stage marks a joyous return to live performance. The first of six shows in the 2021/2022 season, “Eureka Day” runs Oct. 13 -31. Tickets on…