A new, $3-million philanthropic commitment from alumnus Joseph Strasser ’53 B.A. (History)/’58 M.P.A. will create a permanently endowed and named professorship in public administration at the Maxwell School of Citizenship and Public Affairs, while also building on a legacy of giving that places Strasser among the most significant Maxwell donors of all time. 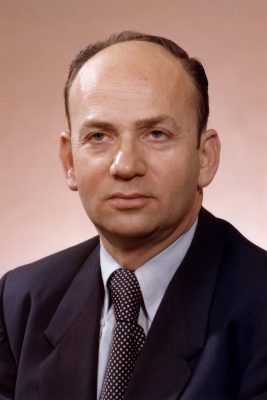 The Joseph A. Strasser Endowed Professorship in Public Administration is the first named and endowed professorship specifically focused on public management at the Maxwell School. It will provide a prestigious appointment to a scholar or practitioner who is a leader in public administration, while reasserting Maxwell’s primacy in the field of state and local government management. The gift—which combines generous annual support in addition to a planned bequest—allows the school to name the first Strasser Professor in the very near future.

“Joe Strasser will forever be an important figure in the history of the Maxwell School,” notes David M. Van Slyke, dean of the Maxwell School. “Not only is he among the most generous donors of all time across all areas of our school, but his professional public service as a leader and a manager has helped define the discipline and is a quintessential Maxwell story.”

The new Strasser Professorship recognizes Strasser’s significant professional accomplishments and his broader philanthropic commitments. Strasser’s career is viewed as a model for public administration professionals, who are challenged to manage and lead increasingly complex systems of government.

After serving as a finance officer in the U.S. Army during the Korean conflict and then earning a Maxwell M.P.A., Strasser was the first budget officer of Savannah, Georgia, where he was nominated as Young Man of the Year for saving DeKalb County a quarter of a million dollars. He later served the city of Jacksonville, Florida, as budget officer, where, among many other achievements, he introduced civilian, professionally trained fiscal administrators into fire and police departments. Strasser served in various fiscal posts in Jacksonville until he retired in 1996.

Strasser is a member of the board of Tree Hill, a 50-acre nature park in Jacksonville; he has donated funds to renovate the park’s amphitheater (which is named for him), replace its main gate, and provide for operation and maintenance. And he supports First Coast No More Homeless Pets, whose veterinary clinic is now located in the Joseph A. Strasser Animal Health and Welfare Building in Jacksonville. He is a longtime supporter and board member of the Jacksonville Humane Society and Animal Shelter.

Strasser’s early personal story is, in some respects, even more impressive than his professional and philanthropic accomplishments. In the run-up to World War II, his family lived in Austria but fled to France when persecution seemed imminent. In 1940, Strasser and his brother boarded a kindertransport rescue ship and arrived in America, where they were later joined by their father. (Their mother had died of illness in France.) Strasser has often described this escape, and the chance to build a new life in America, as the underlying incentive for his philanthropy and altruism.

Strasser, an honorary member of the Maxwell Advisory Board, is a recipient of the Maxwell School Horizon Award for philanthropy and voluntarism (2011), the first ever Maxwell Award for Public Administration (2006), and Syracuse University’s Melvin A. Eggers Senior Alumni Award (2005). This fall, he will receive the University’s top award for alumni accomplishment, the George Arents Award.

“Joe is a true philanthropist, and it’s been my pleasure to work with him for more than 16 years to find meaningful ways for him to have a permanent impact not only on the future of the Maxwell School but also on the future of public service,” says Linda Birnbaum, assistant dean for advancement. “I look forward to seeing Joe’s latest gift begin creating the impact at Maxwell that all of his previous gifts have had. Generations of Maxwell students, faculty and staff will forever be grateful to Joe.”

About the Maxwell School (@MaxwellSU)

Syracuse University is a private, international research university with distinctive academics, diversely unique offerings, and an undeniable spirit. Located in the geographic heart of New York state, with a global footprint, and nearly 150 years of history, Syracuse University offers a quintessential college experience. The scope of Syracuse University is a testament to its strengths: a pioneering history dating back to 1870; a choice of more than 200 majors and 100 minors offered through 13 schools and colleges; nearly 15,000 undergraduates and 5,000 graduate students; more than a quarter of a million alumni in 160 countries; and a student population from all 50 U.S. states and 123 countries. For more information, please visit www.syracuse.edu.