Share
College of Engineering and Computer ScienceCollege of LawscholarshipStudentsTillman Scholar 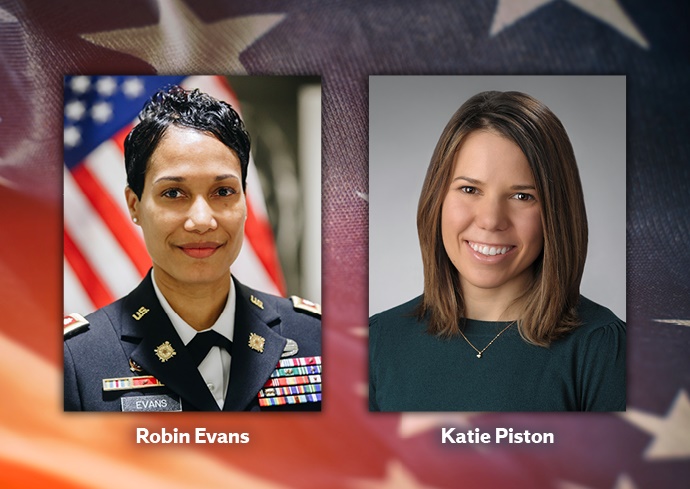 Katie Piston, a doctoral candidate in the bioengineering program in the College of Engineering and Computer Science, and Robin Evans, a first-year in the College of Law, have been named 2018 Tillman Scholars. The newly named class of 60 U.S. service members, veterans and military spouses across the nation will receive more than $1.3 million in scholarships to pursue higher education degrees from the Pat Tillman Foundation (PTF).

“The 2018 Class of Tillman Scholars is a diverse, innovative group of people dedicated to making an impact in their chosen fields; from nursing practice and water conservation to business administration, public policy and beyond,” says Marie Tillman, board chair and co-founder of PTF. “We are proud to support this newest class of Tillman Scholars, empowering them to make an impact in their own communities and around the world.”

Piston is a Navy spouse and proud granddaughter of a WWII veteran. While earning an undergraduate degree at Purdue, she experimented with the design of “smart” military helmets and spent six years observing orthopedic surgery at the local VA hospital.

Inspired by those who bravely serve, Piston is pursuing a doctoral degree in bioengineering at Syracuse in an effort to advance the treatment of serious diseases, including cancer, Alzheimer’s disease and traumatic brain injury. She is part of a team researching nanocarriers to deliver lifesaving medications to patients with neurodegenerative diseases and infected wounds. In addition to her research, Piston serves as a teaching assistant and research mentor for undergraduate engineering students as well as a personal trainer and fitness and yoga instructor.

“I am so honored to represent Syracuse University and the Tillman Foundation as a Tillman Scholar. My two long-standing career goals are to conduct impactful research that will make a difference in worldwide health, and to educate the next generation of engineers to do the same,” says Piston. “Being a Tillman Scholar is more than just a scholarship, it empowers me through national networking and professional development, to honor Pat Tillman’s legacy and make an impact that improves the lives of not just veterans’ and their families but all citizens.”

Evans grew up an impoverished child in Kansas. The first in her family to serve in the armed forces, she initially enlisted to repay her undergraduate student loans and planned to only serve a few years. Evans went onto serve as a logistician, providing fuel, food, ammunition and maintenance support to soldiers for 22 years, through 14 relocations and multiple deployments and leadership roles. She is set to retire as a lieutenant colonel of the U.S. Army and will begin law school at Syracuse this fall.

Inspired by the adoption of her son from Ethiopia, Evans has become a passionate advocate for both domestic and international adoption reform. Evans plans to use her degree to start a nonprofit that will ensure comprehensive pre-adoption education, post-adoption support and the necessary training for those who serve children and families in order to better understand the adoption and foster care experiences.

“I hope to use my voice and law degree to advocate for families—improving the adoption and foster care experience,” says Evans.

“Both Katie and Robin embody the strength, character, academic excellence and incredible potential for which Tillman scholars are known and we are proud to celebrate them as they receive this prestigious honor,” says Michael Haynie, vice chancellor for strategic initiatives and innovation and executive director of the Institute for Veterans and Military Families. “Being a Tillman partner and supporting their charge to empower active-duty service members, veterans and their spouses while having not one, but two notable scholars within our academic community at Syracuse affirms the hard work of so many as we remain steadfast in being the best place for veterans and their families.”

In 2002, Pat Tillman was a starting safety for the National Football League’s Arizona Cardinals. He put his football career on hold to serve his country and died in April 2004 while serving with the U.S. Army’s 75th Ranger Regiment in Afghanistan. Following his death, family and friends established the Pat Tillman Foundation, which invests in military veterans and their spouses through scholarship and programmatic support, and is dedicated to building a diverse community of leaders committed to service to others.

Founded in 2008, the program supports active-duty service members, veterans and their spouses with academic scholarships, a national network and professional development opportunities, so they are empowered to make an impact at home and around the world. The scholarship program covers direct study-related expenses, including tuition and fees, books and living expenses, for scholars who are pursuing undergraduate, graduate or post-graduate degrees as a full-time student at a public or private, U.S.-based accredited institution. The selection process for the Tillman Scholars program is highly competitive.

Each year, the foundation collaborates with 15 University Partners to identify and select qualified applicants on their campuses for the Tillman Scholar screening process. Now in its second year as a University partner, Syracuse University was selected for its innovative veteran services, strong culture of support for military veterans and spouses and its rigorous academic programs.

To date, PTF has invested more than $16 million in academic support, and named over 580 Tillman Scholars at over 100 academic institutions nationwide.