On the lacrosse field, timing is everything. No one knows that better than former Syracuse goalie Dom Madonna ’18. In 2017, Madonna and his lacrosse teammates Ben Williams ’17 and Joe DeMarco ’17 saw a need for a solo training device for one of the most important positions in the game, faceoff specialist. 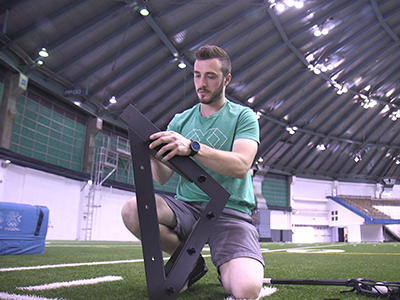 “In order to practice, you need somebody else,” says Madonna. “Being able to create a product that lets you train against yourself, essentially, and work on what you need to work on is important.”

Madonna, a mechanical engineering major in the College of Engineering and Computer Science, started working on different designs. He was challenged by the fact that a device would have to be able to mimic the angle of an opponent’s stick and wrist movement with different levels of resistance.

“That was the first difficult part, making sure the movement was realistic enough,” says Madonna. “We needed it to be able to allow a lot of rotation around a single point because a lot of times in faceoffs, you will see a guy clamp and they could spin in circles for 30 seconds.”

Madonna and his partners needed to find a way to make a device strong enough for a Division 1 lacrosse player to push against—but be lightweight enough for it to be portable. Lacrosse cleats gave Madonna the inspiration for a solution.

“We made an x-shaped cleat, and what that does is allows you to dig into the ground and when it moves, it is locking itself more and more into place when you turn it,” says Madonna. “Whatever force you push into it, you are going to get back.”

“We ended up winning that, then we won the game so it was a great weekend for us,” says Madonna.

Madonna was a full time engineering student, playing Division 1 lacrosse and building a startup business He also worked on the patent application in his free time.

“My roommates used to make fun of me; I got all my work done past midnight,” says Madonna. “I finished this design at 4 a.m. one night.”

Their hard work is paying off. Colleges and high school lacrosse programs are already using the X-Factor Real-Rep Pro Faceoff Trainer and they can be purchased on Lax.com.

“Seeing it used at practice and on sidelines of our games was kind of like, wow, this is something that is reasonable to use,” says Madonna. “The idea for the company is we are making training products and products in general for the specialists on the field. There is a lot of opportunity.”