How One Newhouse Alumna Is Bringing Business News to Underserved Audiences 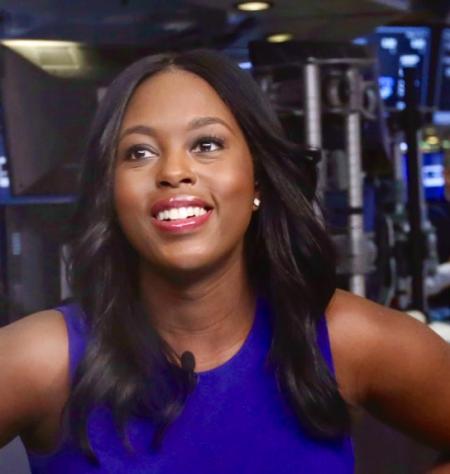 When Kori Hale G’13 was working as an investment banker, she didn’t see any representations of herself on the business news shows she watched from the trading floor.

CultureBanx grows out of her background in both journalism and business. Before she graduated from Newhouse with a master’s in broadcast and digital journalism, she worked as an investment banker at UBS and Goldman Sachs. “I always knew I wanted to do business news,” she says. “While I was at Newhouse I worked on getting an internship at Bloomberg, and through that internship I got a job as a producer there,” she says.

Hale’s work at Bloomberg led her to her next position, producing news at CNBC. “There, I met the founder and now CEO of [online news outlet] Cheddar [Jon Steinberg], and he asked me to come build the company with him,” she says. “I was an anchor at Cheddar and became the first African-American woman to anchor live from the New York Stock Exchange floor. And then, at the end of last year, I was like, ‘This is the time, I have to [create CultureBanx].’”

Hale says she is currently focusing on getting eyes on CultureBanx content. She and Som-Pimpong are also working on building live studios and scaling up CultureBanx’s live content.

“[We have] a very robust digital strategy,” she says. “The reporting we do is original content in that we are taking a mainstream story and making it relevant for black culture and going in-depth on it through that lens. That takes a little bit of work to say the least. If you were to go to our website, you’ll see 12 new stories, and each story is market and business driven, but is told through the lens of black professionals and is culturally relevant.”

Part of what makes CultureBanx culturally relevant is how the outlet presents its stories. Hale says that CultureBanx chooses a song to accompany each story and embeds a Spotify link in the story to that song. “That’s something that sets us apart from other business news outlets,” she says.

Hale is working to build the business. “I spend a ton of time meeting with partners. We just got a partnership with Reuters and I have meetings with Twitter and Spotify coming up,” she says. “I also meet with a lot of venture capitalists who are interested in investing.”

Hale is also looking to hire more staff in order to keep up with the growing CultureBanx audience. “We only have three employees, but we need more,” says Hale. “Right now we are [getting] 100,000 content views a month, and in a few months we are expecting to [get] 1 million. Then we will be able to reassess how many views per month we can target by the end of the year.”

Hale says she hopes the growth of CultureBanx will make business news accessible and relatable for all people.

“I hope it renews the balance between business news and impacting communities. Because when people don’t see a reflection of themselves, there is a ripple effect,” she says. “I want to equal the playing field in a fun, fresh, unique way.”

Story by Mia Rossi, a senior broadcast and digital journalism major at the Newhouse School.

Timur Hammond, assistant professor of geography and the environment in the Maxwell School, wrote an op-ed for Inside Higher Ed titled “8 Tips for Grad Students for Planning in 2021.” Hammond also serves as a faculty liaison for the Future…

Thomas Keck, the Michael O. Sawyer Chair of Constitutional Law and Politics and professor of political science in the Maxwell School, wrote an op-ed for Syracuse.com titled “What’s the point of impeachment? ‘To lay down a marker for history.’” Keck,…

Gladys McCormick, associate professor of history and the Jay and Debe Moskowitz Endowed Chair in Mexico-U.S. Relations in the Maxwell School, authored an op-ed for The Hill titled “Improving the security situation between US-Mexico.” McCormick is an expert on U.S.-Mexico…