On Friday, May 11, ROTC cadets officially became the next generation of military leaders at the annual commissioning ceremony at Hendricks Chapel, signaling the end of training and the beginning of the graduating seniors’ military career. The cadets graduated from five schools, including Syracuse University, SUNY Oswego, Le Moyne College, Utica College and Cazenovia College. The 26 graduates became second lieutenants in either the U.S. Army or U.S. Air Force and were given their first salute by a mentor, family member or friend who serves or has previously served in the military. 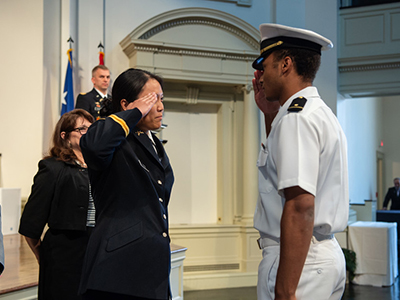 A cadet participates in her first salute at the ROTC commissioning ceremony.

Following the salute, the new officer presented the mentor with a silver dollar. This tradition is thought to have originated from British troops stationed in the U.S. during the colonial era. A silver dollar is given in exchange for the first salute, representing deeply felt gratitude for the mentorship and lessons given by the non-commissioned officer to the ROTC student, now a newly minted lieutenant.

This ceremony marked one of the first times Syracuse University has had two general officers execute the oath of office to their graduating daughters during the ceremony. Maj. Gen. Michael Fantini, keynote speaker, spoke about the importance of being passionate about your mission, your people and your family. In keeping with his theme, Fantini’s daughter, 2nd Lt. Elizabeth Fanitini, graduated with a degree in psychology and will be an intelligence officer stationed at Goodfellow Air Force Base in Texas. Brig. Gen. John Hussey also commissioned his daughter, 2nd Lt. Erin Hussey, who graduated from SUNY Oswego and will join the Medical Service Corps at the NY Army National Guard in Buffalo. “These extraordinary women are carrying on their families’ legacy and commitment to service,” Chancellor Kent Syverud said.

There was a great show of pride from the families in the audience when Syverud remarked on how the commissioning “brought it home and full circle” for them, the cadets and the university, as one family member said.

“Even when your sons and daughters are in civilian clothes on campus, I always know who they are. It is not just that they carry themselves well. It is also that they are still some of the only students on campus who call me ‘sir,’” Syverud said. “To the parents and families here today—in humility I have to acknowledge this: I don’t know how you did it—I don’t know how you raised a child in today’s world to get up earlier; to work harder; to grin and bear it and do the job; to serve others and our country. But you did do it and I owe you my highest compliment as a parent. … Thank you for raising them. Thank you for sharing them with Syracuse University, and with our country.”

The day before the commissioning, Vice Chancellor Mike Haynie presented commissioning gifts to the ROTC cadets. The gifts serve as a token of appreciation for the students’ dedication to ROTC during their time at Syracuse.

Also during Thursday morning’s event, this year’s class of Dottle Family Scholars were recognized. Named for Paul Dottle, a parent of two recent alumni, and his family, Dottle scholars were chosen through a competitive process that explores the applicant’s academics, citizenship, physical aptitude and potential to serve successfully in the U.S. Army and U.S. Air Force. These scholarships allow the ROTC programs to recognize deserving cadets while having additional support to ensure that the University’s ROTC programs continue to train the best military leaders in the country.