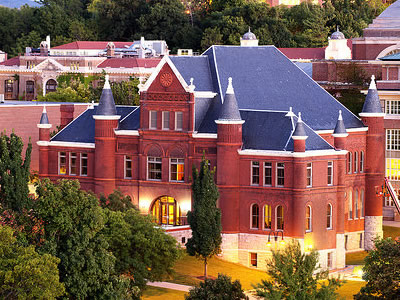 The Humanities Center in the College of Arts and Sciences (A&S) celebrated the accomplishments of its 2017-18 fellows. The cohort consisted of semesterlong Faculty Fellows as well as yearlong Dissertation Fellows and Graduate Student Public Humanities Fellows.

Vivian May, director of the Humanities Center, is proud of this year’s awardees. “They exhibited scholarly excellence for which the University is known,” says May, also a professor of women’s and gender studies in A&S. “Their projects ranged from the traditional to the interdisciplinary, and included narratives, histories, genres and communities that often have been overlooked or underappreciated.”

The Dissertation Fellows were Maria Carson, a Ph.D. candidate in religion, and Thomas J. (T.J.) West III G’11, G’18, who graduated in May with a Ph.D. in English.

Every spring, the Humanities Center supports up to four Faculty Fellows: three from A&S (one of whose research embodies the Syracuse Symposium theme) and one from Maxwell. 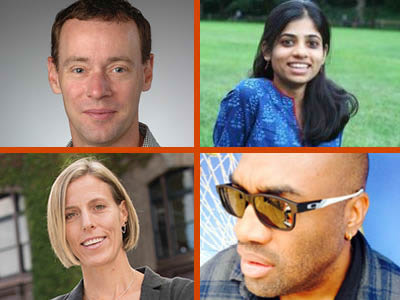 “Any given media behavior of a text can advance a wide range of interpretations and political agendas, bringing to life latencies in a text’s form. These latencies often force us to rethink the text’s significance at the time it was written,” says Goode, who studies the impact of British Romantic literature on culture, gender, media and intellectual history.

Goode is parlaying his fellowship research into a similarly titled book project. “The book will examine how new media forms can extend the lives of certain British Romantic texts, causing us to reconsider the texts’ political potentials in their original historical contexts,” he says.

To appreciate Kumar’s project is to understand Michel Foucault’s concept of “governmentality.” (He was a 20th-century French philosopher who studied how relationship and power worked together to create social control.) “While the operation of colonial power in British India mostly conformed to Foucault’s delineation of governmentality, there were important differences that, instead, indicated the operation of a particularly ‘colonial governmentality,’” she says. “For instance, governmentality in the European context presupposed the development of the freedoms of civil society and a self-regulating economy, both independent of state authority and regulation.”

Coercive policing, however, was part of the colonial Indian economy. Such authority, Kumar explains, often led to economic repression. “It also produced alternative sites of power in colonial society,” she adds.

James Gordon Williams
“Crossing Bar Lines: Improvising Humanity in the 21st Century”
Williams is a creative musician and critical musicologist who studies the improvisational, compositional and technological practices of African American musicians. While most of the music that Williams researches is relatively new, he considers it an extension of the “archives and repositories” of Black life and the Black community.

“African American improvised and popular music reflects, critiques and sparks dialogue about the complex, structural issues in American society that concern racial inequality, systemic violence, gender bias, segregation and unequal access to quality education,” Williams says. “Black music is not the solution to these problems, and is not always about resistance. Yet it creates a vital, inclusive space for envisioning a better way of existing in the world and thinking through these historically situated challenges.”

He illuminates this point by comparing how African American musicians have responded to today’s Black Lives Matter movement versus the Civil Rights Movement of the 1950s and ’60s. “A new generation of artists is using jazz improvisation, hip-hop and R&B to address a whole host of human rights issues,” says Williams, adding that new technologies are changing the way artists create, promote and distribute their music. “Community across races, genders and sexualities is being fostered like never before.”

Sascha Scott
“Modern Pueblo Painting: Art, Colonization and Aesthetic Agency”
A Syracuse Symposium Faculty Fellow, Scott examined how notions of “Belonging”—the theme of the 2017-18 symposium—interfaced with different perspectives and genres. She researched five 20th-century Pueblo painters who asserted their aesthetic agency amid ongoing colonialism. “Native artists have a history of creatively adopting, confronting, transforming and subverting colonial culture and structures,” she says. “Their art serves the creative, economic and political needs of the artists themselves and often their communities.”

Scott works at the nexus of art history, anthropology and Native American and indigenous studies, with an eye toward redefining the ethics and ethos of art history. She says that, during the early 1900s, Pueblo artists created objects for outsider markets that sometimes contained sensitive, esoteric information, which their descendants have since tried to conceal. Thus, Scott seeks permission from the artists’ communities and relatives to study their objects and solicit feedback.

“Consultation also helps foster dialogue with indigenous communities about my work. It leads to a more polyphonic narrative,” says Scott, a recipient of a 2018 National Endowment for the Humanities Summer Stipend and a George A. and Eliza Gardner Howard Foundation Fellowship from Brown University for 2018-19. “Writing about this process highlights the complex cultural and political issues at play.”

Every year, the Humanities Center awards up to two Dissertation Fellowships to Ph.D. students in A&S. These competitive one-year awards support doctoral students completing their dissertations. Each fellow’s project must exhibit strong evidence of humanities content and methods, as well as advance humanistic scholarship. 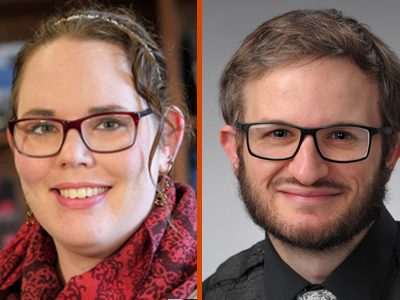 Maria Carson
“A Tzaddik Sighs: Abraham Joshua Heschel, Affect and Nostalgia”
Carson is based in the Department of Religion, where she pursues a graduate concentration in “Critique, Image and Politics.” The concentration addresses the relationship between religion and aesthetics, ethics, psychology, sociology, philosophy, and political and cultural theory. Carson describes it as the “perfect setting” for building on her interest in Rabbi Abraham Joshua Heschel.

A postwar theologian and philosopher, Heschel wrote numerous books about basic questions of religious faith. He called his task “Depth Theology,” in an attempt to explain what happens within a person to bring about faith. His best-known books, which were integral to Carson’s fellowship, are “Man Is Not Alone” and “The Sabbath,” both from 1951, and “God in Search of Man,” published in 1955.

“These books provide new ways of thinking about transcendence, immanence and the Jewish post-Holocaust experience in the United States,” says Carson, who studies American gender roles of the 1950s and ’60s. “I am interested in the way Heschel addressed gender in his work and how affect theory [the subjective experience of emotions] permeated his theology.”

The fellowship enabled Carson to travel to Duke University to conduct research at the world-renowned David M. Rubenstein Rare Book & Manuscript Library. There, she pored over many of Heschel’s and his wife’s effects, including holiday cards and letters he wrote, in search of his family after the Holocaust.

“They revealed a glimpse into the private life of one of the 20th-century’s greatest minds,” she says.

Thomas J. (T.J.) West III G’11, G’18
“History’s Perilous Pleasures: Experiencing Antiquity in the Postwar Hollywood Epic”
A scholar of Hollywood cinema, West specializes in the historico-biblical epic, a film genre that flourished in the 1950s and ’60s with its grandiose depictions of the ancient world. Classic examples include “The Ten Commandments” (1956), “Ben-Hur” (1959) and “Cleopatra” (1963), to name a few.

“I argue that the historico-biblical epic confronts the terrifying possibility of the end of human history, engendered by the atomic bomb, by transmuting this existential fear into a series of dialectics, between agency and powerlessness, embodiment and transcendence, desire and death, imperial splendor and its impending decline,” says West, who completed and defended his dissertation during the fellowship.

Recently, West earned a master’s degree in English and a certificate of advanced studies from the Department of Women’s and Gender Studies. Working in multiple departments in A&S, he says, helped him approach film studies more holistically. “Film offers an experience of the terrifying nature of history through an appeal to the ancient world, while also seeking—though never quite succeeding—to ameliorate that terror,” says West, the 2018 recipient of the Graduate School’s All-University Doctoral Prize.

In March, West won the Libraries Associates’ Mary Hatch Marshall Essay Award for “The Spirit is Willing, but the Flesh is Weak: Embodied Transcendence and Sacred Spectatorship in ‘The Robe.’” The paper, which draws on the titular 1953 film, will appear later this year in Material Religion: The Journal of Objects, Art and Belief (Taylor & Francis). 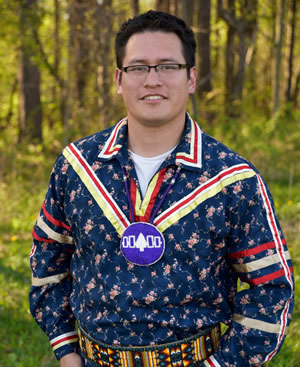 Hugh Burnam
“The Haudenosaunee Thought Project”
Burnam is a member of the Mohawk Nation Wolf Clan, with personal ties to the Skä•noñh—Great Law of Peace Center, a Haudenosaunee heritage center near campus. He used his fellowship to foster meaningful dialogue among members of Syracuse, the Skä•noñh Center and the Haudenosaunee territories on whose ancestral lands the University now stands.

“We generated critical intergroup and intragroup conversations about indigenous identities within the Haudenosaunee Confederacy and neighboring communities,” Burnam says. “All three entities [the University, Skä•noñh and the Haudenosaunee] are committed to education, diversity and inclusivity in public and private spheres. There are various challenges, however, to collaborating within and among each community. My project created spaces of conversation across the differences, provoking a transformational dialogue among all concerned.” 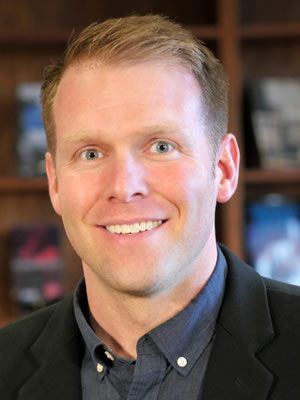 Stewart used his fellowship to design a series of readings of essays and poetry that, in turn, fostered a dialogue among OEC crewmembers about the environment and civic health of the City of Syracuse. “I used the idea of place to bring fresh insight and imagination into understandings of citizenship and community,” says Stewart, whose Ph.D. dissertation views the intellectual life of the American West through the lens of author Wallace Stegner.

Stewart’s fellowship considered the effect of place—past and present—on people. “OEC builds community within the organization and the city, in general. It imagines ways to bridge the social divisions of race and class that have plagued us for so long,” he adds.