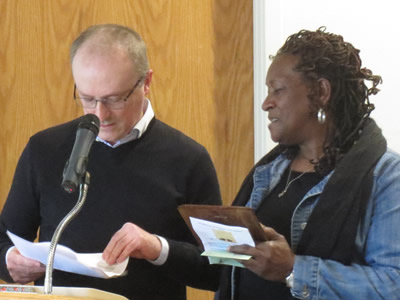 When the Department of Languages, Literatures and Linguistics (LLL) bestowed the annual Gerlinde Ulm Sanford Award on Erma Martin in April, it marked the first time the coveted prize went to a non-academic. Which is just fine with Gail Bulman G’96, the award’s founder.

“Erma is the custodian who takes care of our offices,” says Bulman, associate professor of Spanish in the College of Arts and Sciences (A&S). “Her workday in Huntington Beard Crouse Hall begins at 4 a.m., long before the sun rises or anybody else arrives in LLL. Erma’s job is not particularly glamorous, and, for the most part, it goes unnoticed. That’s because she does it so well.”

Notes Stefano Giannini, associate professor of Italian and chair of LLL: “Erma does a lot of important, behind-the-scenes work to keep the department clean and organized. She creates a pleasant working environment, and greets everyone with a big, friendly smile. Gerlinde would have approved.”

By the time Sanford succumbed to cancer in 2010 at the age of 70, she had attained near-iconic status in her field as a teacher, scholar and administrator. Her 40-year career at Syracuse included two stints as chair of LLL and a lengthy one as a full professor of German, with expertise in linguistic studies, modern Austrian literature and the life of the 18th-century German writer and scientist Johann Wolfgang von Goethe. (At the time of her death, she was editing a two-volume set of correspondence between him and his son, August.) Sanford also coordinated LLL’s German program and oversaw SU Abroad programs in Vienna, Florence and Strasbourg, leading to a Distinguished Service Award.

One of Bulman’s first acts as LLL’s then new chair was to spearhead the creation of the annual Gerlinde Ulm Sanford Award for Loyalty and Dedication to LLL and Syracuse University.

“You can’t have a good department when people are feeling down or underappreciated,” says Bulman, who also directs the Program on Latin America and the Caribbean in the Maxwell School of Citizenship and Public Affairs. “The award pays homage to Gerlinde, and celebrates the many people in LLL who give their heart and soul—and a great deal of time—to the University without much recognition or reward.” 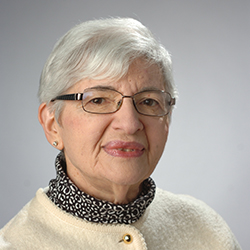 Bulman recruited Nancy Cantor, Eric Spina and George M. Langford—then chancellor, provost and A&S dean, respectively—to help underwrite the cost of the first award, honoring Spanish instructor Elaine Meltzer ’58, G’61. Like Sanford, Meltzer had logged more than 40 years in LLL, and was known for her warmth, generosity and love of the department.

Said Bulman at the inaugural event: “Gerlinde was a wonderful, peaceful and kind person with an unbeatable work ethic. She was here with us every single day for the full day. If you came in on a Saturday or Sunday, you knew Gerlinde would be here, too. Her loss is palpable in our department.”

Harold Jones, professor emeritus of Spanish, and his wife, Barbara, eventually expanded the purse to $5,000 and agreed to pay for part of the ceremony, which has evolved into a springtime tradition in LLL. 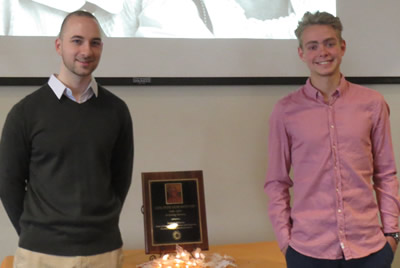 “Hope and Luke were recognized not just for their grades, but for their academic trajectory, commitment to LLL’s mission and values, and closeness to Gerlinde’s ideals. We’re very proud of them,” says Giannini.

He says mounting such a ceremony is a group effort. In addition to Bulman (who does a “marvelous job”), he lauds the contributions of his staff—namely, Colleen Kepler, Christine Palmer and Marie O’Leary. Every year, they field dozens of nominations for the Sanford Award, alone.

Kepler, co-recipient of the 2015 Sanford Award, says there are two kinds of people who attend the ceremony: those who knew Sanford and those who only have heard about her. “Gerlinde made everybody feel special,” says the LLL administrative specialist and graduate coordinator.

Past recipients or co-recipients of the Sanford Award include the following:

• Anna Distefano G’80, instructor of Italian and Syracuse University Project Advance liaison in Italian, and Laura Lisnyczyj ’02, G’04, lecturer in English for Speakers of Other Languages (ESOL) and director of the Fulbright Foreign Language Teaching Assistant program at Syracuse (2014); 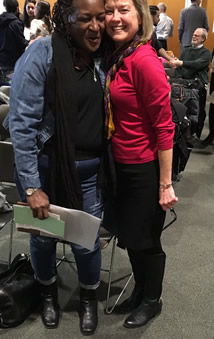 Bulman considers LLL “one big family”—a fitting metaphor reinforced by the mother-daughter team of Distefano and Lisnyczyj. “Gerlinde quietly, but deliberately fostered a caring environment to achieve success. She understood that if people felt like they were part of something meaningful, they would be happier and more productive,” Bulman continues. “They also would maintain a sense of community,”

Kepler drove home this point at the April celebration, mentioning the time an alumna called her, hoping to reconnect with some former LLL classmates. “The one thing she remembered was how nice their teaching assistant [TA] was and how, all these years later, the TA reminded them of Gerlinde,” Kepler told the packed room. “It was then I realized that Gerlinde is not completely gone, as long as we have people who share her ideals. She made an indelible mark on us.”