Women’s basketball student-athlete Isis Young ’18, G’19 gets her drive from her parents. Her networking skills, though, have been honed at Syracuse University.

Young, who graduated with a communication and rhetorical studies degree from the College of Visual and Performing Arts, was constantly encouraged by faculty, coaches and staff with the Athletics Department and its Stevenson Educational Center for Student-Athlete Development to reach out to those in the field she’s interested in—sports broadcasting.

“I meet people with a purpose and I’m always networking,” says Young, who is pursuing a graduate degree in broadcast and digital journalism from the Newhouse School of Public Communications. “Networking has become something of my personality since I’ve been at Syracuse.”

Along with pursuing a degree in civil engineering in the College of Engineering and Computer Science, student-athlete Iliass Aouani ’19 has developed skills in time management and good ethics. “At Syracuse University, they really teach us to be professionals in every sense,” Aouani says.

Balancing academics with training for cross country in the fall and track and field in the spring has reinforced the need to stay focused, but “it’s something that makes you grow,” Aouani says. “When I finish at Syracuse, I plan to keep doing what I love, which is running, and at the same time be conscious that I have a degree to rely on that makes me feel more confident.”

Both Aouani and Young are confident in the knowledge they’ve gained and the skills they’ve learned on and off the playing fields and courts as they look to their long-term goals. Their success stories are reflected in the overall academic success of Syracuse University’s student-athletes as represented by the University’s Academic Progress Rate (APR), announced today by the NCAA.

The APR number, which follows individual student and total program progression at each Division I institution, tracks student-athletes by assigning points for each semester they remain eligible and for staying enrolled or graduating.

Each program at Syracuse surpassed the minimum standard of 930 (a perfect score is 1,000) and, in combining the program numbers, the University earned the highest four-year average since tracking the APR began. The most recent APRs are multiyear rates based on scores from the 2013-14, 2014-15, 2015-16 and 2016-17 academic years.

Student-athlete members of SU’s class of 2018

“The first multi-year APR rate came out in 2006, which rates teams based on their ability to keep their student-athletes eligible and retained at the university,” says Tommy Powell, assistant provost for student-athlete academic development. “Over the past few years the most teams we’ve had with four-year perfect averages had been two. This year we’re proud and excited to say we’ll have five, which is the most in Syracuse University history.”

Additionally, with the University’s combined score being the highest four-year average, “we’re really excited about the overall health of the athletics academic program,” Powell says.

“The key with the APR is that it’s a complete team effort, from our faculty to our campus advisors, coaches and administration,” says Powell, who oversees the academic support staff at the Stevenson Educational Center. Located at Manley Field House, the center provides academic coordinators who help with planning class schedules in consultation with campus and faculty advisors, tutors and a place for student-athletes to study in between classes and practice. “All of us work together to make a world-class experience for our student-athletes and prepare them for life when they leave.” 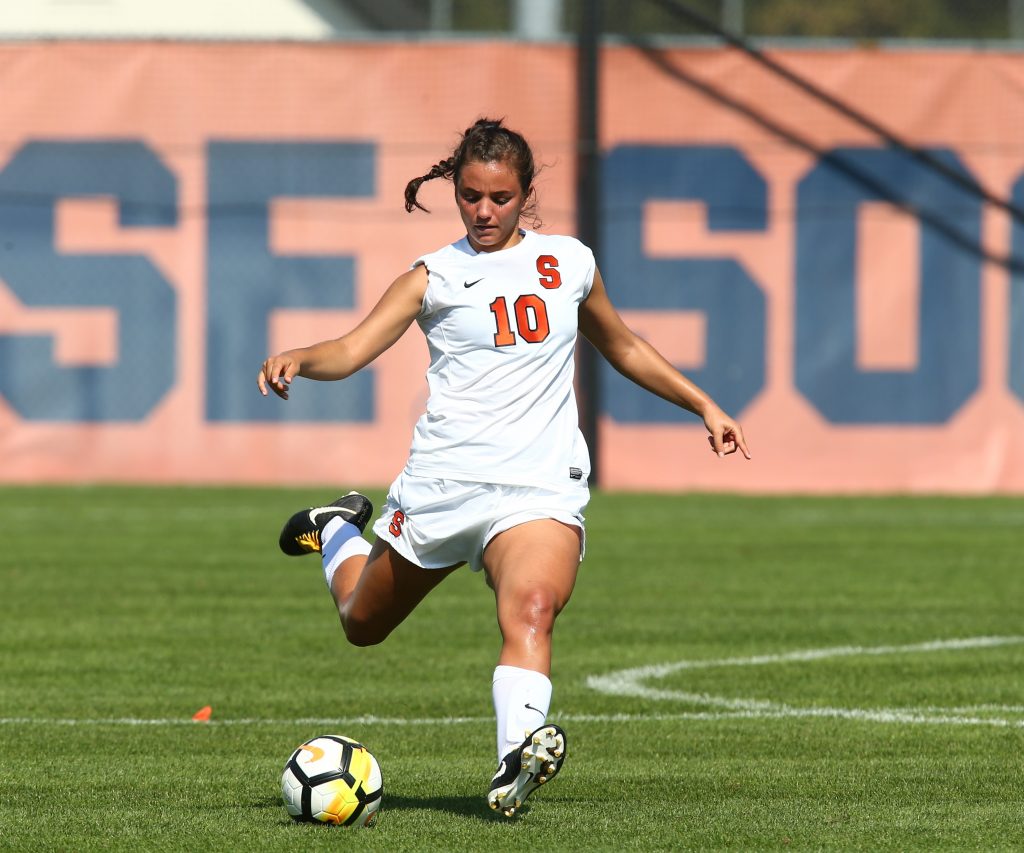 Soccer student-athlete Jessica Vigna ’18, who graduated with a degree in exercise science from the School of Education, plans to pursue a doctorate of physical therapy after spending a year getting experience working with a physical therapist. In her cover letter, she emphasized the skills she’s developed as a student-athlete. “Being on a team you learn about communication skills, leadership, cooperation and team work,” Vigna says.

Vigna also points to the support of the Stevenson center staff, who helped her early on to organize and prepare for her academic school work, especially during the busy soccer season with road games when it could be challenging.

Cross country and track and field student-athlete Justyn Knight ’18 was grateful for the assistance in pursuing his academic goals and recalls an encouraging tutor his junior year who helped him excel.

“She didn’t let me to settle for mediocre work; she always wanted me to the best student I could be—the same way my coaches expected me to be the best athlete I could be,” says Knight, who graduated with a degree in social work from the Falk College of Sport and Human Dynamics. “That really stayed dear to me.”

Members of the Stevenson center staff were always interested in what his future plans might be outside of a running career and offered advice on how he might reach his goals. 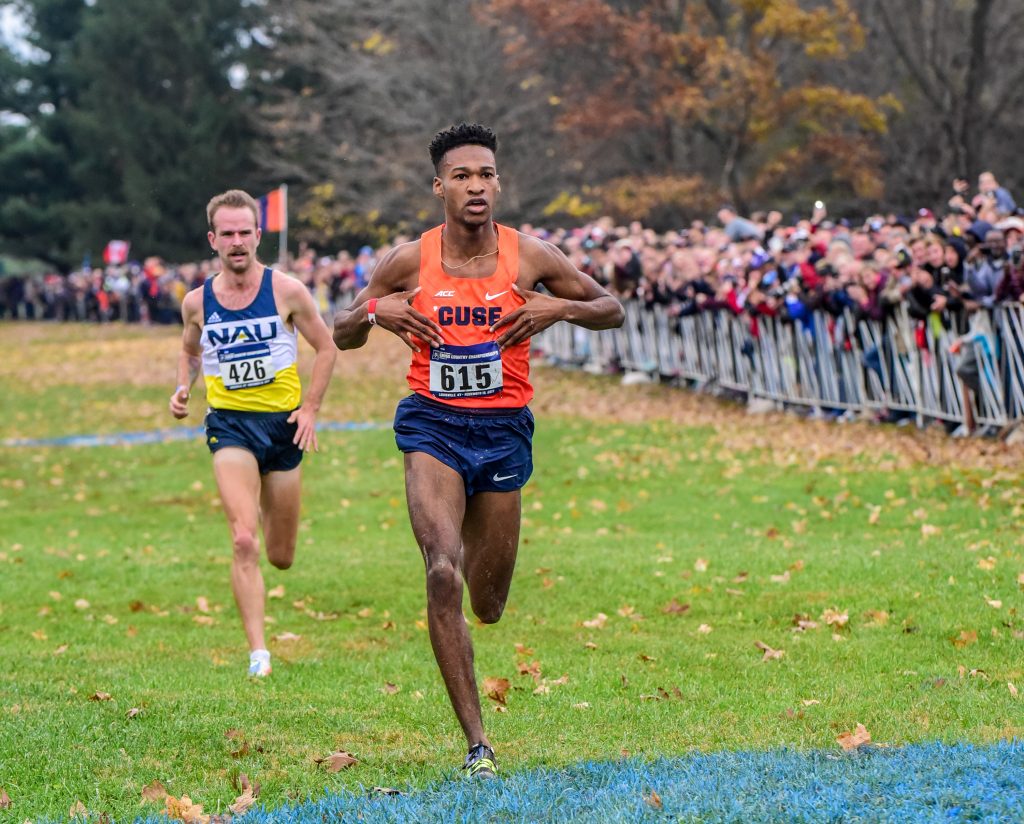 “The one thing they stress here is you have to be happy with what you’re doing. If you can figure out what makes you happy, or hobbies that you might like, then they can help you formulate some jobs you might be interested in,” Knight says.

“I used the Stevenson center for tutors, especially in my harder classes, calculus classes or any of my coding classes,” says Mitchell, who graduated with a degree in information management and technology from the School of Information Studies. “It’s easy to get stressed out, but knowing you have a whole team of support behind you when you do miss classes [for away games] it’s really helpful.”

Mitchell brought her education and her confidence as a student-athlete into the job interview process. “Being able to talk about the competitive nature and the time management skills that it brings helped me,” says Mitchell, who was hired to work at Keysight Technologies in marketing automation.

For Young, she parlayed her networking skills into a job-shadowing experience with ESPN journalist Jemele Hill, whom she met after a speaking engagement on campus. Young explained to Hill that she was interested in sports broadcasting and asked if she could shadow her.

Hill invited Young and her mom to Miami in April to watch as she hosted ESPN’s programs “Highly Questionable” and “Around the Horn.” In Miami, Hill spoke to Young about her rise in sports journalism and the challenges she’s faced. 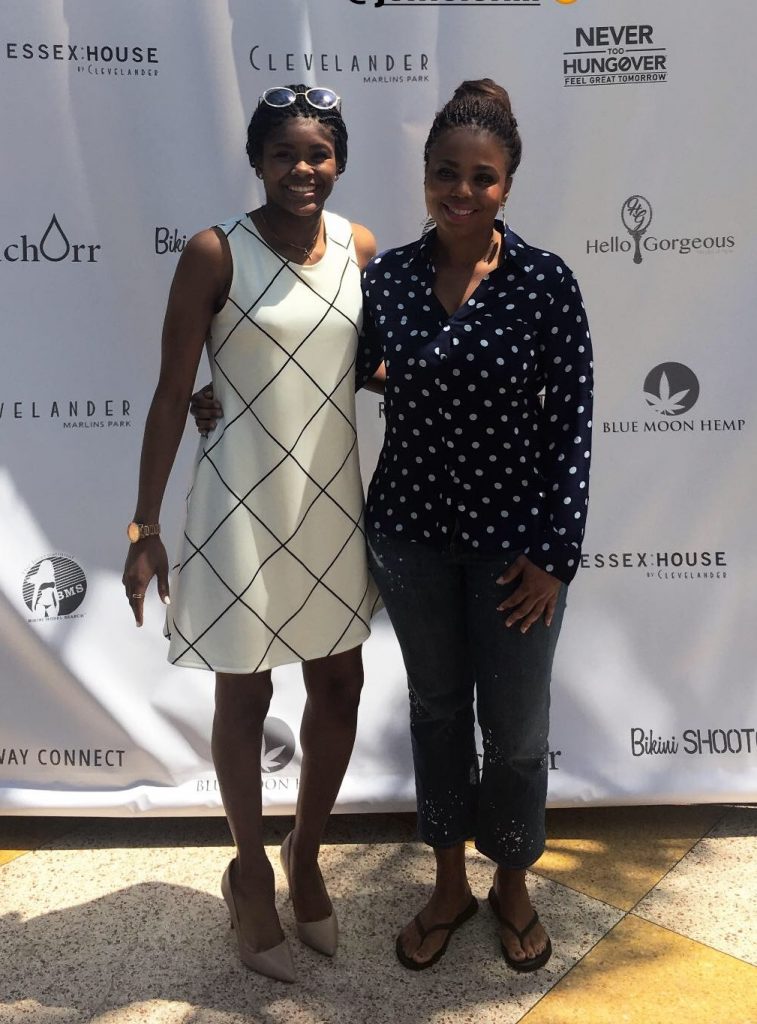 “Her best piece of advice was broadcasters who have the same personality on and off television are the best people for the job because they remain comfortable all the time—whether they’re in front of the camera or not,” Young says.

Valuable life skills that can translate into professional careers is a component of the Department of Athletics’ “S” Project, which helps student-athletes learn skills and knowledge in the areas of career readiness, financial education, healthy relationships and wellness, and personal development.

The program was put into place several years ago after the Student-Athlete Advisory Council suggested a full-time life skills staff member. In 2015, academic coordinator Mark Trumbo was appointed coordinator of student-athlete engagement and later launched the “S” Project.

In matters of career preparation, student-athletes can attend sessions, organized in partnership with the University’s Career Services, on such topics as branding, resume building and interviewing skills.

Cross country and track and field student-athlete Colin Bennie ’16, G’18 feels ready to take the next steps in terms of a career because of the support of the athletics staff. Bennie graduated with a political science degree from the College of Arts and Sciences and the Maxwell School of Citizenship and Public Affairs and is finishing up a graduate degree in public administration from the Maxwell School.

“They set us up for academic success here by always being available for whatever we need—whether for career prep or working on resumes or cover letters,” Bennie says, “or getting assistance to prep for an exam or a quiet place to study.”

Bennie, who is looking at opportunities to work in the nonprofit field or possibly in coaching or athletic administration, was recognized for his success as one of this year’s  winners of the Soladay Award, the most prestigious award given to a student-athlete by the Department of Athletics. Named after long-time athletics administrator Doris Soladay, the award is given annually to the top male and female student-athletes.

“Our coaches always demand we live a professional lifestyle and be the best we can in running and in everything we do,” says Bennie, who is also a member of the Student-Athlete Advisory Council. “It’s easy to translate that to a career—you want to put your best foot forward and work the hardest and leave a lasting impact.”

Syracuse University is a private, international research university with distinctive academics, diversely unique offerings and an undeniable spirit. Located in the geographic heart of New York State, with a global footprint, and nearly 150 years of history, Syracuse University offers a quintessential college experience. The scope of Syracuse University is a testament to its strengths: a pioneering history dating back to 1870; a choice of more than 200 majors and 100 minors offered through 13 schools and colleges; nearly 15,000 undergraduates and 5,000 graduate students; more than a quarter of a million alumni in 160 countries; and a student population from all 50 U.S. states and 123 countries. For more information, please visit http://syracuse.edu.