Five New Members Elected to University’s Board of Trustees 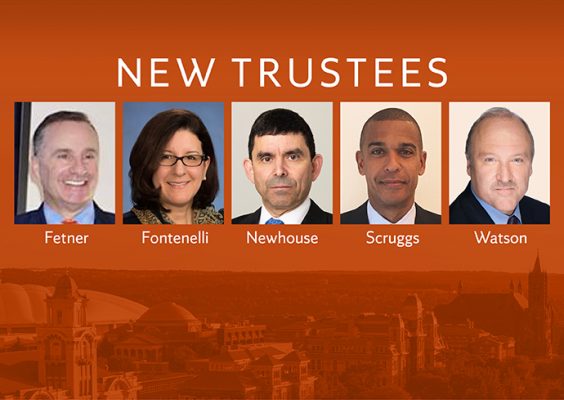 “The Board is pleased to welcome these five new members,” says Steven W. Barnes ’82, chairman of the University’s Board of Trustees. “We look forward to working with them as we continue the momentum we have built through the Academic Strategic Plan, Campus Framework and Invest Syracuse. There is still much to do, and their added guidance will help us as the University strives to achieve its vision and mission.”

“We are fortunate to have Hal, Lisa, Michael, Jeff and Dave joining the ranks of Syracuse University’s Board of Trustees,” says Chancellor Syverud. “Their fresh perspectives and new ideas, combined with the depth and breadth of expertise among our current members, will allow our university to continue to thrive as a distinctive, global research institution.”

Fetner is the president and chief executive officer (CEO) of Fetner Properties. He became president and CEO of Sidney Fetner Associates (SFA) in 1988.

Under Hal’s direction, Fetner Properties has become one of the most respected development companies in New York real estate focusing on affordable and market rate housing. He has earned the reputation as one of the foremost green sustainable builders in the city, having built multiple LEED® Gold residential buildings. Prior to joining Sidney Fetner Associates, he served the State of New York for three years as a clerk for the Honorable Joe Hynes, special prosecutor of the State of New York.

For Syracuse University, Fetner is a member of the Whitman School of Management Advisory Council and the Whitman Real Estate Advisory Board and serves as a guest lecturer. He also created the Fetner Program Fund Scholarship at the Whitman School, dedicated to students pursuing sustainability.

Fetner, along with his family, is an active supporter of numerous civic, professional and philanthropic organizations. He sits on the Board of Governors and the Executive Board of the Real Estate Board of New York, New York City’s leading trade association for Real Estate, and recently joined the Board of Trustees of the Citizens Budget Commission, a nonpartisan, nonprofit organization pursuing constructive change in the finances and services of New York City and states.

Fetner graduated from the Whitman School of Management, and earned a juris doctor from New York Law School. He and his wife, Nina (Pearlstein), are the parents of Samantha ’13, Emma ’20 and Alex. They reside in Westchester.

Fontenelli retired as a managing director at Goldman Sachs in April 2017 after 25 years at the firm. Prior to her retirement, she was global head of securities research and deputy head of the Global Investment Research Division. She was named a Goldman partner in 2006 and served on the firm’s partnership committee.

From 2004-15, Fontenelli served as trustee of Georgian Court University in New Jersey. The institution, founded by the Sisters of Mercy in 1908, provides a comprehensive liberal arts education in the Roman Catholic tradition. During her tenure as trustee, she was a member of the Finance and Advancement Committees, co-chaired the Centennial gala and participated in women’s leadership development initiatives including facilitating a panel of Goldman Sachs female executives at a University Women’s Leadership conference.

For Syracuse University, Fontenelli is a member of the Whitman School of Management Advisory Council. Since 2006, Goldman Sachs has hosted students participating in Syracuse University’s Stuart Frankel & Co. New York Stock Exchange Program, known as the Frankel Scholars Program, in part due to Lisa’s sponsorship. She remains an active participant with the Frankel Scholars and other University immersion programs.

Newhouse is a senior executive officer and director in the Advance/Newhouse companies. Advance/Newhouse is a global, diversified privately owned group of media companies that operates Condé Nast, which produces high-quality content in a variety of media formats, including print, digital and video, for audiences throughout the world.

The Advance/Newhouse companies also operate: local media companies that publish newspapers in over 25 cities in the United States, as well as websites and other digital products; American City Business Journals, which publishes business journals and websites and other digital products in 40 cities in the United States; 1010data, Inc., which offers data platforms and analyses for large data sets; and POP, Inc., a digital marketing agency. Advance/Newhouse also holds significant minority interests in Charter Communications, and in Discovery Communications, Inc., and is the majority owner of Reddit.

Though an alumnus of Tufts University, Newhouse has long been a member of the broader Syracuse University community. He is the son of Donald Newhouse ’51, H’16 and grandson of Samuel Irving Newhouse Sr., for whom the S.I. Newhouse School of Public Communications is named. Keeping with his family’s legacy of philanthropic giving, Newhouse serves as an officer of the Samuel I. Newhouse Foundation, through which the family’s giving is administered.

Newhouse is married to the former Elyse Applebaum with whom he has two children, Alexander and Andrew, who attended the College of Arts and Sciences. They reside in New York City.

Scruggs is a managing director at Goldman, Sachs & Co. and is co-head of the Public Sector Banking group within the Investment Banking Division. He joined Goldman Sachs in 2008 as managing director.

In 1985, he started as a financial analyst in the Municipal Securities Group at PaineWebber Inc. After two years in that position, he served as a special assistant and manager of the Loan Portfolio Sales Program for the U.S. Department of the Interior, where he managed the sale and disposition of the department’s $700 million loan portfolio program, which was part of a federal government asset sales initiative. After completing his MBA in 1991, Scruggs returned to the Municipal Securities Group at PaineWebber Inc. (and then UBS Financial Services, the successor to PaineWebber) as a vice president. He later became a managing director and was director and head of the public finance group prior to his departure.

For Syracuse University, he is a member of the Maxwell School of Citizenship and Public Affairs Advisory Board. There, he and his wife, Robbin Mitchell, established the Otey and Barbara Scruggs Scholarship Fund, which enables the Maxwell School to recruit the top graduate students. The fund is named after Jeffrey’s parents, including his father—the late Otey Scruggs—who served on the Maxwell faculty for 25 years, and his mother Barbara.

Scruggs also presently serves on the Board of Trustees at the Trinity School of New York City. He joined that board in 2013 and has been the chairman of the Finance Committee for the past four years.

Scruggs earned an economics degree from Harvard College in 1985 and an MBA in 1991 from Harvard Business School. He and his wife have two children, both of whom attend the Trinity School. Jack is 15 and in ninth grade and Ava is 10 and a fourth grader. They reside in Manhattan.

Watson serves as president and chief executive officer of Comcast Cable and senior executive vice president of Comcast Corp. In this role, he is responsible for all business aspects of the company’s cable operations.

Previously, Watson served as Comcast Cable’s chief operating officer (COO), where he drove the operating strategy and execution that have led to the division’s growth as the nation’s largest internet service provider and one of the largest video providers. As COO, he led all of the cable company’s operations and business functions, including sales and marketing; the product teams for Xfinity Internet, Xfinity X1, Xfinity Voice and Xfinity Home; the Comcast Business division; and provided oversight of the company’s three operating divisions and Comcast Spotlight, the company’s advertising sales unit. Watson has held a number of leadership roles at Comcast since joining the company in 1991, and has led multiple divisions and operating units.

For Syracuse University, Watson is a member of the Newhouse School Advisory Board, and was co-chair of the Mirror Awards luncheon in New York City in 2016.

Watson is the chairman of C-SPAN’s executive committee, and serves on the board of directors of CableLabs and the National Cable and Telecommunications Association. Watson is a graduate of the University of Richmond. He and his wife, Ellen, reside in Bryn Mawr, Pennsylvania, and are the parents of Daniel ’17 (Newhouse School) and Maura.