Share
appointmentsCollege of LawfacultyMaxwell School of Citizenship and Public Affairs 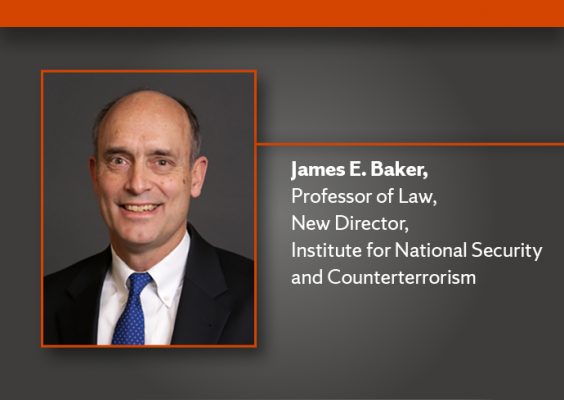 Jurist, scholar, and law and policy practitioner James E. Baker will join the faculty of the College of Law and Maxwell School of Citizenship and Public Affairs as a professor in Fall 2018. Judge Baker will lead the Institute for National Security and Counterterrorism as director, succeeding Professor William C. Banks, who founded the Institute in 2003.

As one of the most highly regarded national security lawyers and policy advisors in the nation, Baker has built a career that has evolved from being an infantry officer in the U.S. Marine Corps to the staff of Sen. Daniel Patrick Moynihan to the U.S. Department of State, Foreign Intelligence Advisory Board and National Security Council. Mostly notably, he served on the U.S. Court of Appeals for the Armed Forces for 15 years—the last four as chief judge.

Since 2015, Baker has served as a member of the Public Interest Declassification Board, as a consultant for the Intelligence Advanced Research Projects Activity and as chair of the American Bar Association’s Standing Committee on Law and National Security. He has taught at several universities, including his alma mater, Yale Law School, and the Georgetown University Law Center. From 2017-18, he was a Robert E. Wilhelm Fellow at MIT’s Center for International Studies. Previous recipients of this prestigious fellowship include former U.K. Foreign Secretary David Miliband and Adm. William Fallon, former commander of U.S. Central Command.

“I am extremely pleased to welcome Judge Baker into our College of Law family and, given the interdisciplinary approach to national security at Syracuse, I look forward to introducing him to the University as a whole,” says College of Law Dean Craig M. Boise. “Not only will he strengthen the college’s reputation and reinforce INSCT’s leadership position in national security law and policy, he is positioned to transform how the topic is studied and taught and to respond with intellectual agility as new security challenges emerge. Under his guidance, I fully expect INSCT to continue its exceptional track record of graduate placement in this practice area.”

“I am very delighted that Judge Baker will be joining Syracuse University and leading INSCT,” says Maxwell School of Citizenship and Public Affairs Dean David M. Van Slyke. “His commitment to interdisciplinary research with policy implications and to working across the sectors and levels of government makes him an ideal leader and one that we in the Maxwell School are very excited to work with.”

“Judge Baker is one of the most highly regarded national security lawyers in the nation,” says Professor William C. Banks, founding director of INSCT. “His path to excellence spans appointments in the U.S. military, in public service and on the bench, and in academia. He is a gifted teacher and an accomplished scholar, whose penetrating analyses of national security law problems are routinely cited as exemplars in the field. That he has compiled an impressive record of publications while engaged as a judge and legal adviser in government is a testament to his energy and drive to educate about national security.”

“I am excited and honored to be joining Syracuse University and the faculty of the College of Law and Maxwell School. It is also a privilege to take INSCT’s helm from Bill Banks. Bill is a friend, an educator and a scholar whose vision created the institute and whose leadership enriched it for more than 15 years,” says the  Baker. “INSCT’s excellent reputation for interdisciplinary scholarship and hands-on national security academics attracted me to this position. So did the University’s deep and sincere commitment to public service and to veterans. I look forward to continuing the institute’s research, teaching, service, and legal and policy analysis initiatives; to expanding its portfolio of sponsored programs; and to working on critical, emerging challenges in national security law and policy with colleagues in the College of Law, Maxwell School and across the University. I especially look forward to mentoring the next generation of national security practitioners and thought leaders.”

Baker is the author of two books, “In the Common Defense: National Security Law for Perilous Times” (Cambridge University Press, 2007) and “Regulating Covert Action” (Yale University Press, 1992, with Michael Reisman) as well as numerous chapters and articles. Among his several awards, Baker has been honored by the National Security Council, Central Intelligence Agency and the U.S. Army Command and General Staff College (Honorary Master of Military Arts and Science, 2009). He holds a B.A. from Yale University (1982) and a J.D. from Yale Law School (1990).