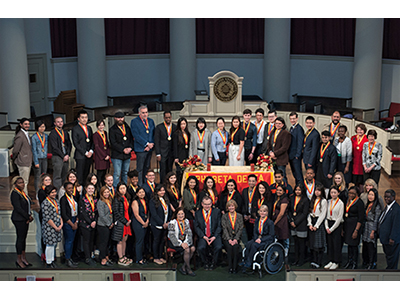 The induction ceremony took place in Hendricks Chapel, during which the new members were awarded a medallion and certificate of membership. The keynote address was delivered by Amanda Nicholson, assistant provost and dean for student success in the Division of Enrollment and the Student Experience and professor of retail practice in the Whitman School of Management. Nicholson and Peter A. Vanable, associate provost of graduate studies, dean of the Graduate School and professor of psychology in the College of Arts and Sciences, were inducted as honorary members.

Phi Beta Delta is the first honor society dedicated to recognizing scholarly achievement in international education. The society also recognizes U.S. students who have studied abroad and faculty and staff who are involved in international activities.

Current executive board members of the Alpha Sigma chapter nominated this year’s inductees based on commitment to internationalization and academic performance. The cohort of new inductees includes outstanding American and international undergraduate and graduate students, SU faculty and staff members.

This year’s nominations and induction ceremony were led by Mary Idzior, associate director of the Slutzker Center for International Services and president of the Alpha Sigma chapter of Phi Beta Delta.