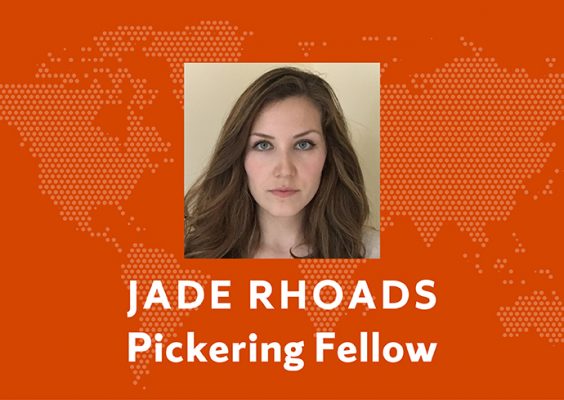 Jade Rhoads’ interest in pursuing an advanced degree in international affairs and working in the Foreign Service began during her service in the military. Rhoads served active duty in the U.S. Marine Corps from 2005-09—stationed at Camp Pendleton, California, and deployed to Iraq during the years of 2006 and 2008, primarily in the Al Anbar region.

As she graduates from SU this spring with a dual major in Russian language, literature and culture from the College of Arts and Sciences and in geography with a minor in security studies from A&S and the Maxwell School of Citizenship and Public Affairs, she is well on her way to achieving that goal. Rhoads has been named a 2018 Thomas R. Pickering Graduate Foreign Affairs Fellow and plans to attend the Fletcher School of Law and Diplomacy at Tufts University in Medford, Massachusetts, this fall. She is one of only 30 recipients chosen from hundreds of applicants from more than 200 colleges and universities around the nation.

Funded by the U.S. Department of State and administered by the Washington Center, the Pickering Fellowship awards recipients two years of financial support, mentoring and professional development to prepare them for a career in the Foreign Service. Fellows also complete a domestic internship at the U.S. Department of State in Washington, D.C., and an overseas internship at a U.S. embassy.

Rhoads is also the recipient of a Critical Language Scholarship, also funded by the U.S. Department of State, and will spend the summer in Kyrgyzstan. There, she will participate in an intensive Russian language program at the American University of Central Asia and stay in a local home to practice her speaking skills.

Rhoads says her military service inspired her academic and career trajectory. “My service inspired my pursuit of security studies because I feel I have a lot to offer regarding the understanding of the human dimension of security,” Rhoads says. “I had the honor of participating in the Lioness mission (the Marine Corps Female Engagement Team) on both of my deployments. I enjoyed learning how to navigate the intricacies of Iraqi culture while still keeping in mind our security measures. I think finding that balance of being culturally appropriate but still completing your goal is what makes global security studies so appealing to me—that there is that human aspect to it.”

Rhoads’ goal is to serve as a political officer in the Foreign Service, in any location, drawing on skills developed through both her military service and academic studies. “It would really honor my passion for language learning, working in dynamic environments and learning to adapt to new cultures. As a Russian language, literature and culture major, I feel I’d be effective in Eastern Europe, Central Asia or Russia, but also having spent several years in the Middle East I know I’d be effective there as well.”

At Syracuse, Rhoads has built her foundation of knowledge and skills through a dual major in Russian and geography. “I think what geography does more than anything is give one perspective,” she says. “In my Russian studies I’ve learned about and read Russian literature, fairytales and folklore, art, history and culture. My training in the nuances of language and culture has made me better able to navigate a different culture and understand where differences come from.”

Last summer, Rhoads was selected as a Udall Scholar in the field of tribal policy. A member of the Tuscarora Nation, she was encouraged to apply for the Udall by Jolynn Parker, director of Syracuse’s Center for Fellowship and Scholarship Advising (CFSA). “I was unsure about applying because I initially did not see myself as a good fit,” Rhoads says. “But Jolynn was able to help me readjust how I see myself so I could realize that this is something I should apply for.” Parker says Rhoads was a very strong candidate. “One of the best parts of my job at CFSA is helping students consider opportunities they may never have thought about before and realize their potential,” she says. “Jade put together a very distinctive, compelling Udall application.”

Rhoads attended a one-week mandatory Udall Scholar orientation in Tucson. “It was wonderful. All the scholars were interesting and motivated, and a lot of the activities were centered on leadership, negotiating and building that core network and support system Udall is known for,” she says. Rhoads also attended a Native Nation Building three-day workshop in Tucson prior to the start of the Udall Scholar orientation.

One initiative that Rhoads especially wants to undertake is advocating for recognition of native passports and identification cards. “Haudenosaunee passports exist but are not honored; we also have identification cards that are also not always honored,” says Rhoads. “To have a recognized Native Nation passport means to me, personally, that the U.S. accepts indigenous sovereignty. As part of the larger community, it opens the world up for Haudenosaunee to exist as Haudenosaunee as opposed to traveling as a U.S. citizen and therefore claiming U.S. citizenship.”

“What is most fascinating about Jade is the fact that she’s already led so many very different lives in her short time on this earth: Native American, U.S. Marine, government contractor, student, wife, mother and soon Foreign Services Officer or diplomat,” says Erika Haber, associate professor of Russian language, literature and culture and Rhoads’ mentor. “The many diverse perspectives she’s held as a result of these different identities and the extensive traveling she’s done have given her a maturity and levelheadedness beyond her years and will make her an outstanding asset to our Foreign Service corps.”

If Rhoads ever needs inspiration to push her along in her studies, she looks no farther than her 2-year-old daughter, Vera. “She inspires me in my studies and work because I understand it is my responsibility to ensure the world she grows up in and the world she inherits from our generation is safe, healthy and more understanding than the one we live in now,” Rhoads says. “This also implements my Haudenosaunee belief of thinking seven generations ahead, which means you are conscious of what your actions produce not just immediately, but also in the long-term.”