Skä·noñh: Great Law of Peace Center and the Onondaga Nation will honor Chancellor Kent Syverud for his commitment to enhancing the University’s relationship with the Haudenosaunee with a reception on Sunday, April 29. 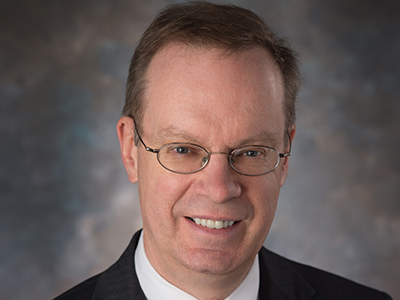 Since his inauguration in April 2014, Syverud has initiated several measures that honor the Haudenousanee. They include the University’s policy of opening public events with an acknowledgement of the Onondaga Nation and flying the Haudenosaunee flag in prominent campus locations. He also has continued support for the Haudenosaunee Promise, a scholarship for Haudenosaunee students established in 2006 in appreciation for the historical, political and cultural legacies of the Haudenosaunee.

During a visit to Chancellor Kent Syverud’s office, Native American scholar Philip Arnold noticed a lacrosse stick in the corner. The Chancellor picked up the stick and said, ‘It’s one of my prized possessions,’ Arnold recalls. It was a gift from Alf Jacques, renowned lacrosse stick maker and a member of the Onondaga Nation, the indigenous peoples upon whose ancestral land the University now stands.

“He has a real emotional connection to the Haudenosaunee that’s unique,” says Arnold, Department of Religion chair in the College of Arts and Sciences and founding director of Skä·noñh: Great Law of Peace Center.

Syverud has visited the longhouse several times and was instrumental in holding the World Indoor Lacrosse Championship games at the Dome. At the December University Senate meeting, he honored the memory of Onondaga Chief Irving Powless Jr. H’09, who died at age 88 the previous week. “I ask that the minutes of the Senate show our University’s collective respect for Chief Irving Powless Jr., one who embodied the wisdom of the land, a historian, ambassador, actor, musician, veteran, defender of the environment and champion of justice,” the chancellor said at the meeting.

“He’s been very supportive,” says Freida Jacques ’80, an Onondaga Nation clan mother who will speak at the reception. 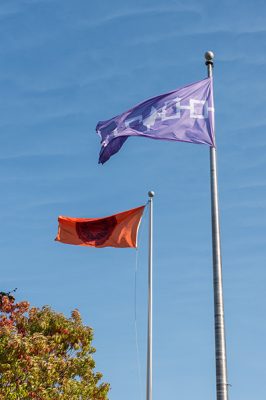 The Haudenosaunee flag flies alongside the SU Flag on the Quad.

Jacques is especially pleased that Syverud implemented acknowledgement of the Onondaga Nation events. “It’s something we wanted for a long time,” she says. “This is right up front at graduation and events. We’re not hidden away like we were for many years. It feels respectful.”

The Skä·noñh: Great Law of Peace Center tells the story of the Haudenosaunee (Iroquois) and their founding at Onondaga Lake more than 1,000 years ago through the lens of the Onondaga Nation, the “Central Fire” of Six Nation Confederacy. The center is overseen by the Onondaga Nation, in collaboration with Onondaga County, Syracuse University and neighboring educational institutions, and is managed by the Onondaga Historical Association. “Skä•noñh” is an Onondaga greeting that means “peace and wellness.”

The chancellor’s recognition and honor for the Haudenosaunee “are important in creating an atmosphere of respect for the Onondaga Nation,” Arnold says. “I’ve always thought students should know something about the significance of this place. The Chancellor and Provost think this is an important attribute of what it means to be Orange. This is a great opportunity to acknowledge the Chancellor’s leadership in this area.”

The reception will be held on Sunday, April 29, from 5-8 p.m., at the center, 6680 Onondaga Lake Parkway in Liverpool.  The reception will include non-alcoholic drinks and traditional Native American food. Tickets are $100 and can be purchased online. Proceeds will support the center’s educational programming and the restoration and stabilization of a three-panel ceramic work by Mohawk artist Tammy Tarbell.

For more information on the event or to buy tickets, contact Nicole Abrams, director of the Skä·noñh: Great Law of Peace Center, at nicole.abrams@cnyhistory.org, or 315.453.6769.