Two-dozen music students from Syracuse University and the Syracuse City School District will collaborate in a rock concert in Setnor Auditorium Wednesday to celebrate the diversity of music in the community. 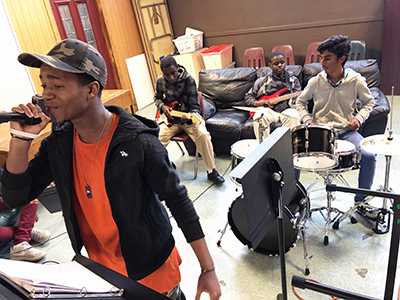 The New American All Stars practice for their debut concert at Setnor Auditorium.

It’s the debut concert of the Music in the Community program run by David Knapp, an assistant professor of music education in the College of Visual and Performing Arts and School of Education. The musicians include music education students in VPA’s Setnor School of Music and the School of Education and members of the New American All-Stars from the Catholic Youth Organization’s Refugee Youth Program. The program includes popular and original songs from the United States, Syria and Rwanda.

“The primary goal is to provide the students at CYO with a feeling of success and accomplishment,” says Knapp. “By doing this, the audience will see the rich diversity and talent within our city.”

Twelve students between the ages of 13 and 18 comprise the core of New American All-Stars. Coming from Congo, Rwanda, Syria, Jordan, Afghanistan and Sri Lanka, they represent the diversity of Syracuse, says Knapp.

They perform on a variety of rock band instruments—including electric guitars and basses, a drum set and keyboard—and will be joined by 14 undergraduate and graduate students in the Secondary General Music Methods course, who will play their own songs and accompany the New American All-Stars.

The New American All-Stars and students in the methods course wrote or selected all the music on the program, Knapp says. “Once students selected their music, I simply transcribed and taught them the chord changes. But many of these students at CYO were already so musically talented, they were able to figure out the music themselves.”

Music in the Community began in fall 2017 to connect undergraduate and graduate student experiences with community programs, Knapp says.

“In doing so, music education was able to partner with community organizations, like CYO, in providing much-needed services, while also giving our students meaningful pre-service learning experiences with diverse groups in our Syracuse community.”

The performance is made possible by support from the John L. and Dona Lynn Kreischer Scholars Initiative at the School of Education. Jack Kreischer III ’65 is a Life Trustee of Syracuse University and his wife, Lynn Duncan Kreischer ’66, is an emerita member of the School of Education Board of Visitors and former chair. They set up the fund to support the Teaching English Language Learners program, with preference for literacy collaboration with the music education program on community music.

The Kreischers’ “continued commitment to the university and Syracuse community has allowed for this kind of opportunity to partner in ways that support student and community outcomes,” Knapp says.

The New American All-Stars concert runs from noon-1 p.m. in Setnor Auditorium of Crouse College, followed by a reception. The events are free and open to the public.

Sound Beat: Access Audio is providing two free family audiobooks written by Emmy Award-winning journalist Cheryl Wills ’89,  the great-great-great granddaughter of Emma and Sandy Wills, enslaved people from Haywood, Tennessee. The audiobooks are narrated by the author and are…

Syracuse Stage announced adjustments to the schedule for the remainder of the 2020/2021 season. These adjustments include replacing previously announced shows with new titles and come in direct response to the evolving situation concerning the COVID-19 pandemic. Starting in February,…

“Visual and Performing Arts students wouldn’t have a reason to be here if they couldn’t sing or hold an instrument or act onstage or spend time in the studio.  The arts are a social activity, not something that lends itself…

Since April 2020, a team of students from the School of Architecture have been working on a master plan to transform a street scape in the future city of Xiong’an New Area in China’s Hebei province. After a long delay…