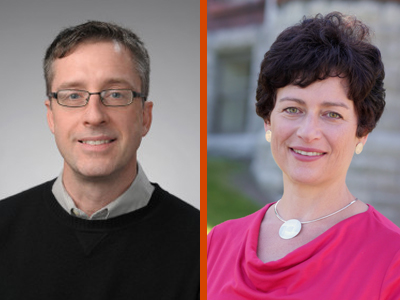 Glenn Wright and Vivian May

Two Syracuse University projects have received 2018 National Endowment for the Humanities (NEH) awards. Glenn Wright, director of Graduate School Programs, and Vivian May, director of the Humanities Center and professor of Women’s and Gender Studies, received funding to enhance doctoral training for humanities Ph.D.s in ways that prepare them to pursue a wide range of meaningful careers, both within the academy and outside it. Sascha Scott, associate professor and director of graduate studies in the College of Arts and Sciences’ department of Art and Music Histories, received funding for research and preparation of a book on paintings by 20th-century Pueblo artists of the southwestern United States.

The Syracuse awards are among $18.6 million in NEH grants to support 199 humanities projects nationwide. The NEH, created in 1965 as an independent federal agency, supports research and learning in history, literature, philosophy and other areas of the humanities by funding selected, peer-reviewed proposals from around the nation.

“The NEH is so important, because it provides critical support for humanities research, teaching, preservation and programming,” says Gerald R. Greenberg, senior associate dean of the College of Arts and Sciences. “Not only does it benefit the scholars who receive funding to pursue their research, but also students and the public, who are able to enjoy fruits of the work done by those researchers.”

This year’s NEH awards are especially welcome following President Trump’s March 2017 call to eliminate the NEH, along with the National Endowment for the Arts (NEA), the Corporation for Public Broadcasting and other arts and cultural agencies. The 2018 federal spending bill[RG1] , passed by Congress and signed by President Trump last month, included increases of about $3 million to the NEH and NEA, raising their annual budgets to about $153 million each.

“Continued federal funding provides support for a wide variety of efforts,” Greenberg says. “The NEH supports educational programs for veterans, provides funding for libraries, museums and theaters, and has the potential to benefit pretty much everyone in society throughout the entire country. There is no question we all would be missing a lot if the NEH weren’t around.”

Recent NEH-supported projects at Syracuse include the Humanities Open Book Program (a joint project with the Andrew W. Mellon Foundation), which allowed Syracuse University Press to digitize 23 titles from its Irish Studies and New York State series; and the creation of a digital atlas of nearby Onondaga Lake that includes Rachel May, director of sustainability education; Jane Read, associate professor of geography in Maxwell; and Phil Arnold, associate professor and chair of religion in A&S. 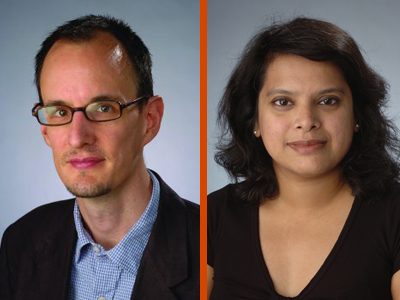 In addition, more than five Syracuse scholars have received NEH summer stipends in the last decade. Recent awardees include associate professor of history Michael Ebner, who conducted archival research in Rome for a book on Italian Fascism, and Romita Ray, associate professor of art history and chair of the Department of Art and Music Histories, who did research in the United Kingdom for her book project “From Two Leaves and a Bud: Visualizing Tea in Colonial and Modern India.”

Thanks to 2018 funding, Wright and May are co-directing an ambitious initiative that includes four projects aimed at advancing the University’s capacity to place its humanities doctoral graduates in a wider range of positions. “Reimagining Doctoral Training in the Humanities” received $24,997. It is one of four projects the NEH funded in the category Next Generation Ph.D., totaling $89,146.

The project is a response to what Wright and May see as “the disquieting imbalance between the number of Ph.D.s emerging from humanities programs and available full-time faculty positions.” They will oversee a four-pronged approach that will research potential initiatives Syracuse may implement by academic year 2019-20.

Working groups made up of about 25 faculty, students and alumni across humanities disciplines will address these four topics: curricular reform, professional development and career preparation, creation of a Ph.D. alumni mentoring network and development of resources to enable non-monographic dissertation projects.

“NEH funding will allow us to develop actionable plans and take concrete steps to diversify career preparation for humanities Ph.D. students,” says Wright. “These initiatives are a necessary complement to the work we have always done to prepare doctoral graduates for faculty careers.”

“Rather than diminish or eliminate humanities doctoral training, it is imperative to highlight the essential value of the intensive research, writing and analytic skills honed in humanities doctorates. At the same time, we need to transform how we approach doctoral training and mentoring to meet the evolving needs of our wider society and the changing higher education landscape,” says May. “These changes will help our students find fulfilling careers in a variety of contexts. And, in fact, we have already begun to see the kind of job placement success that can come from thinking more broadly about humanities doctoral research and its wider impact via alumni of our “Humanities New York” Public Humanities Graduate Fellowships at the Humanities Center.” 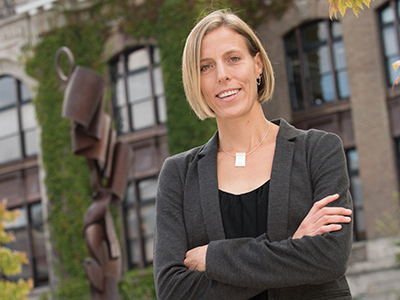 Scott received a $6,000 summer stipend for her second book, “Modern Pueblo Painting: Art, Colonization, and Aesthetic Agency.” Hers is one of 65 grants totaling $390,000 that support full-time scholarly work for two months. Scott also received a Howard Fellowship, awarded by the George A. and Eliza Gardner Howard Foundation through Brown University, to support a research leave for academic year 2018-19. Scott began work on this project as a faculty fellow at the Humanities Center this year.

She will spend this summer in Santa Fe, New Mexico, researching in museums and archives and meeting with tribal liaisons and relatives of the early 20th-century artists she is writing about. Those consultations improve her research and help her to avoid writing about material Pueblo communities might find sensitive.

Her book challenges conventional narratives about American Indian arts produced in colonial contexts by shifting the narrative away from an emphasis on colonial markets and Anglo-American patronage and instead highlighting the artists’ aesthetic agency, or their ability to navigate complex cultural and political systems. “While these paintings were the product of crosscultural contact,” she says, “they do not merely pander to outsider markets. Pueblo paintings are testaments to the artists’ and their communities’ resilience and creativity as they responded to a rapidly changing world.”

Syracuse Stage announced today plans for adjustments to the 2020-21 season in order to address the continuing impact of the COVID-19 virus. Three previously announced plays will be replaced in the six-show season. The Cold Read Festival of New Plays…

In an effort to accommodate students who were unable to travel to Syracuse in time for the Fall 2020 semester, the School of Architecture is hosting a number of courses in China for both incoming freshmen and upper-level architecture students…

On Saturday, Sept. 12, the Rose, Jules R. and Stanford S. Setnor School of Music in the College of Visual and Performing Arts will host “Composing for the Organ,” a series of webinars and a virtual concert that aims to…