It’s estimated that more than 35 percent of the nation’s military spouses are chronically unemployed. In communities like El Paso, Texas—home to more than 40,000 military-connected families—the rate of spousal unemployment is significantly higher than the national average. For this reason, a team from Syracuse University’s Institute for Veterans and Military Families (IVMF) traveled to El Paso last week. The team conducted workshops for military spouses designed to help them create their own jobs, and ultimately control their own futures, as small business owners.

The IVMF’s IGNITE program was created in 2016 to provide military spouses with an introduction to the basic skills required to support successfully launching, owning and operating a small business. In El Paso. More than 100 military spouses registered to participate in the daylong workshop, provided to them by the IVMF at no cost.

“In many ways, the nation’s military families are in crisis,” says J. Michael Haynie, vice chancellor for strategic initiatives and innovation and executive director of the IVMF. “The exceedingly high rates of unemployment experienced by military spouses—due to factors such as frequent relocations, inadequate childcare and limited access to educational opportunities—serves to destabilize military-connected families. Through our IGNITE program, we’re hoping to ignite the entrepreneurial nature that, in many ways, already exists within these families.”

Haynie cites research conducted last year by the IVMF and its partners that identifed a strong correlation between a family’s financial distress during its time in military service and homelessness after leaving the military. Last month, Haynie testified before the Senate Armed Services Committee on this issue and the myriad of other economic and wellness challenges facing military-connected spouses and children.

Diane Pinckney, one of last week’s participants, says she encourages everyone leaving the military to attend the conference, saying it’s a great place to start if they are considering starting a business. 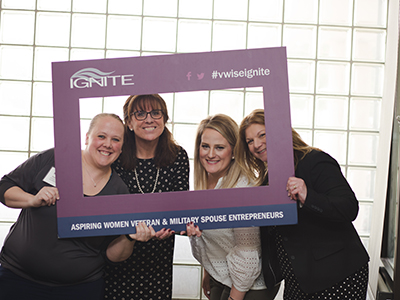 “IGNITE set a great tone for what to expect if I really want to start my own business. I learned about how to know the El Paso market and beyond, as well as the importance of networking with others,” says Pinckney. “I related to the speakers who are veterans, and their practical advice resonated more with me as a female veteran.”

Another program participant, Jennifer Swee, says “IGNITE provided a superior experience to hear from others who had already forged their own path, as well as a chance to network with those who were new to entrepreneurship, just like me. It was a great experience!”

Naomi Conner, whose family was stationed overseas for the past four years, says she was unable to do anything “professional” during that time. She added that the IGNITE program helped to light her back up, so to speak.

“The main advice I received during the event was you have to put the work in,” says Conner. “Most people go into business without realizing the work it takes to make it successful. I had an idea of the work, but hearing the panelists speak, it settled in. Now I know it’s time to do the work needed to launch. The event was absolutely great and I came home fired up!”

On Thursday, the El Paso community honored the IVMF and the University at the El Paso Chihuahuas (the San Diego Padres AAA affiliate) baseball game. A representative from the IVMF was invited on the field for the game’s first pitch, while the public address announcer described to the crowd the work and mission of the institute and how the IVMF is supporting the El Paso community.