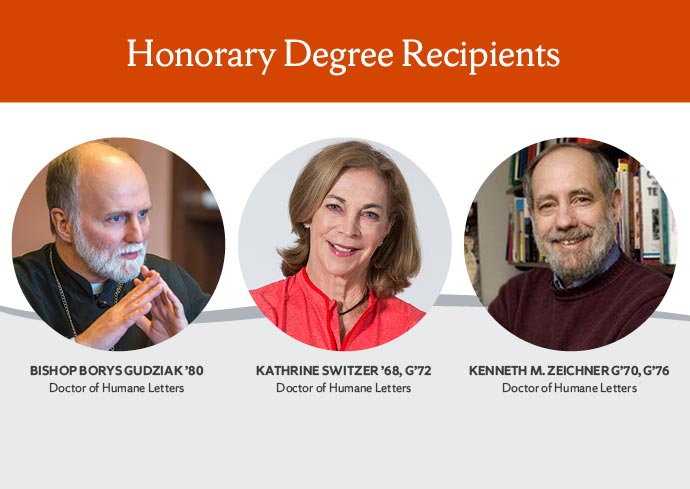 A social and religious justice visionary, a barrier-breaking athlete and activist and a pre-eminent scholar of teaching and teaching education will receive honorary degrees at Syracuse University’s 2018 Commencement on Sunday, May 13, at the Dome.

Bishop Borys Gudziak ’80, bishop of the Ukrainian Catholic Eparchy of Saint Vladimir the Great of Paris, director of external relations for the Greek Catholic Church and president of the Ukrainian Catholic University in L’viv, Ukraine; Kathrine Switzer ’68, G’72, the first woman to officially enter and run the Boston Marathon, who has spent her life championing women in sports; and Kenneth M. Zeichner G’70, G’76, distinguished author and teaching scholar and the Boeing Professor of Teacher Education at the University of Washington, will be honored at the 164th Commencement exercises for their extraordinary achievements and contributions to the world. Switzer will deliver the Commencement address at the ceremony.

Gudziak knew his purpose in life from a young age. He was born and raised in Syracuse, where his parents had fled to escape the Communist occupation of Western Ukraine. As a teenager, Gudziak vowed to become a priest in the Greek Catholic Church in his parents’ homeland, where their church had been outlawed by the Soviets at the onset of World War II. After relocating to Ukraine in 1988, Gudziak has worked tirelessly for Ukrainian Catholics, reviving the Ukrainian Greek Catholic Church (the largest of the 22 eastern churches in communion with Rome) and reopening the Ukrainian Catholic University, and championed all Ukrainians in their revolution to overthrow the country’s corrupt president, Viktor Yanukovych, in 2014.

Gudziak, who earned degrees in biology and philosophy from the College of Arts and Sciences, was inspired to become a priest by Cardinal Josyf Slipyj, who was former head of the Ukrainian Greek Catholic Church and spent 18 years in a Soviet gulag. As a young boy and later as a teenager, Gudziak met the cardinal, who was visiting the United States. He later became a seminarian in Rome under the cardinal, who foresaw the dissolution of the Soviet Union—an idea that was compelling to the young seminarian.

A later influence for Gudziak, who was ordained a priest in 1988 and made a bishop in 2012, was Dutch theologian Henri J.M. Nouwen, whom Gudziak met while earning a Ph.D. at Harvard University. Father Nouwen was pastor of a community in Toronto, where he served people with mental illness. This type of work was an important focus for Gudziak, who made it a pillar of the Ukrainian Catholic University, which he helped re-establish in 1994, after it had been defunct for 50 years under Soviet rule. It is the only Catholic university in the former Soviet Union.

Gudziak has helped the Ukrainian Greek Catholic Church grow and thrive as it transitioned from being under the Soviet regime, which collapsed in 1991. Gudziak has been on a mission to break down the barriers of mistrust and fear that were built under Soviet rule, which included the reported and systematic killing of millions of people. In 1990, he helped organize a youth rally in L’viv that drew over 40,000 people—an event the likes of which had not been seen in the country in nearly 60 years. Bishop Gudziak has also helped replenish the ranks of the Church’s clergy. In the late 1980s, the Ukrainian Greek Catholic Church had only 300 clergymen. Today, there are more than 3,000 priests. His faith and humanitarianism led him to speak out with university students to voice their opinions on corruption, and specifically in matters involving Ukrainian president Yanukovych, who was ousted in the 2014 Ukrainian Revolution.

As a 20-year-old Syracuse University junior in 1967, Switzer became the first woman to officially enter and run the Boston Marathon. That life-defining day inspired her to create greater opportunities for women in sports, including organizing an international running circuit of women’s races, being instrumental in having the women’s marathon accepted in the Olympic Games and establishing 261 Fearless, a global nonprofit to empower women through running.

Switzer, completed her undergraduate work in the Newhouse School of Public Communications and the College of Arts and Sciences and her graduate work at the Newhouse School, has been recognized for her activism in advancing women’s sport, health and equality. Among her many honors, she was inducted into the National Women’s Hall of Fame in 2011 and the inaugural class of the National Distance Running Hall of Fame in 1998.

In 1967, Switzer’s audacious act of entering the traditionally men-only race caused an international stir when a race director tried to forcibly remove her two miles into the run. The moment was captured in photos that appeared in news around the world, creating a revolution in women’s running.

After the 1967 Boston Marathon, Switzer was galvanized into action—becoming an elite runner and campaigning for sports equality for women. Women were officially allowed to run in the Boston Marathon in 1972, the same year Switzer helped create the first-ever women’s road race.

In 1977, she created the Avon International Running Circuit of women’s-only races in 27 countries; over a million women have participated in the races. The global popularity of those races helped convince the International Olympic Committee to establish the women’s marathon in the Olympic Games.

Switzer also had a career in sports marketing and as an Emmy Award-winning broadcasting career. She provided commentary at the Olympic Games and the World and National championships, as well as hundreds of other events. As a journalist, she has published hundreds of articles, and is the author of three books, including her memoir “Marathon Woman.”

In 2015, Switzer established 261 Fearless as a global nonprofit organization to empower and unite women through the creation of local running clubs, educational programs, communication platforms and social running events. The number 261 is a nod to her bib number in the 1967 Boston Marathon, which was retired in April 2017 to commemorate the 50th anniversary of her groundbreaking run.

Zeichner’s impactful teaching and writing has been felt by generations of teachers. He is a strong advocate for K-12 public education, while being insightfully critical about ways public schools and teacher education need to improve. A mentor, teacher and thoughtful scholar, he is one of the world’s most influential scholars on teaching. As a proponent for teacher education that addresses pedagogical inequity, he is respected by teachers, teacher educators, researchers and policy makers.

Zeichner’s early research looked at group memberships in classrooms and the perspectives of new teachers toward teacher education. By the mid-1990s, he was well known as one of the most vocal critics of the socialization that occurred in most teacher education trajectories of the time, arguing for teachers’ and teacher educators’ use of research and critical reflection to address inequities in pedagogical practice. His current work explores the role of venture philanthropy in teacher education policies and practices; on formulating hybrid teacher education programs that combine campus, school and community expertise; and on approaches to teacher education used globally, serving as primary reviewer for programs around the world.

In his distinguished academic career, Zeichner has directed 56 doctoral students and assisted on dozens of doctoral committees, received numerous awards for excellence in teaching and writing, and received over $2 million for sponsored research. Zeichner has served as vice president of the American Educational Research Association (AERA). He has also been a member of the board of directors of the American Association of Colleges for Teacher Education (AACTE), co-chair of the AERA Panel on Research in Teacher Education and member of National Academy of Education Committees on Teacher Education and Teacher Professional Development. He received AACTE awards for excellence in professional writing in 1982, 1993 and 2006, and he was honored with AACTE’s Margaret B. Lindsey Award for Distinguished Research in Teacher Education in 2002. In 2008, he was both awarded the Lifetime Achievement Award from AACTE and elected to the National Academy of Education, and he was elected as a fellow of the American Educational Research Association in 2013.