Syracuse Stage concludes the 2017-18 season with “The Magic Play,” starring magician and actor Brett Schneider and written by Andrew Hinderaker. Performances start April 25 and run through May 13 at the Archbold Theatre in the Syracuse Stage/SU Drama complex at 820 E. Genesee St. Opening night is Friday, April 27. 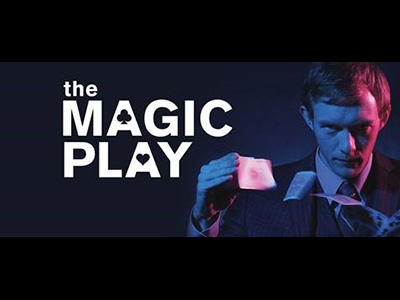 Playwright Hinderaker wrote “The Magic Play” specifically for Schneider. The two have been collaborating since the earliest days of the process and Schneider created all the magic used in the show.

In the play, Schneider portrays a character identified simply as Magician. He is a young and successful entertainer. “The Magic Play” begins with Magician in the midst of a performance of sleight-of-hand tricks. As Magician, Schneider solicits participants from the audience to take part in his act, giving the play the look and feel of a club engagement. A simultaneous live video feed allows the audience to witness the tricks in real time as they unfold.

Another part of “The Magic Play” concerns Magician’s life when he is not performing. Magician is dealing with the fallout from a recent break-up with his lover, a character called Diver played by Sean Parris. Diver is an aspiring Olympian. The question of whether Magician can repair his relationship with Diver becomes the dramatic center of the play.

“In its essence, ‘The Magic Play’ is about love and how you connect with someone. How can you be truthful and trust?,” says the show’s director, Halena Kays. “We see [Magician] grapple with the idea of trust, what real trust is in interpersonal relationships and when dealing with the world as a whole.”

A third character in the play is identified as Another Magician. He is Magician’s father played by Jack Bronis. Though working, the father is less successful than the son, and the two have been estranged for a long time, which leaves Magician with another relationship in need of repair.

“Magician is extremely talented in his craft,” Hinderaker explained. “But when he loses the person he cares most about, he begins to question what is important. What has he given up to be good?”

Hinderaker says he was inspired to write “The Magic Play” because of the impact magic can have on an audience.

“Magic sort of raises the bar for what you can expect from a piece of theater,” he explains. “I’ve been to magic shows where people are gasping out loud, or where they’ve just burst into tears. And I can’t help but ask: why doesn’t theater feel like that more often? My one hope is that people will come away and say, ‘I didn’t know theater could look like that, feel like that.’”

In addition to the potential “wow” it might provide, Kays sees the magic as serving as a kind of metaphor for Magician’s troubled relationships.

“To perform magic, he must be in complete control of the audience—control of what they see, what they think, what they feel,” she says. “What happens if in real life you can’t relinquish that control?”

Tickets are now available at www.SyracuseStage.org, by phone at 315-443-3275 and in person at the Box Office.