University Union is partnering with the Institute for Veterans and Military Families and the Office of Military and Veteran Affairs to present a special cinemas event as a part of the D’Aniello Speaker Series on Friday, April 13, where Commander Mark Nutsch will speaking and participate in an audience Q&A following a screening of “12 Strong.” Nutsch, played by Chris Hemsworth, is the Green Beret commander who led his 12-man team on a 2001 covert mission to Afghanistan. The screening will take place at 5:30 p.m. in HBC Gifford Auditorium with doors open at 5 p.m. 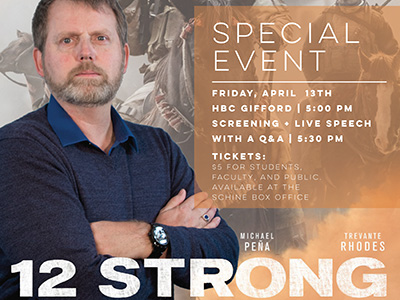 Nutsch shares lessons learned in the now-declassified saga of a U.S. Special Forces team that overcame seemingly insurmountable odds to help achieve a historic military victory. His story is told in the movie “12 Strong” as well as New York Times best-seller “Horse Soldiers.” He shares the true-life story of helping lead what is considered the most successful unconventional warfare campaign in modern history, a victory that changed the course of the country and the world.

In October 2001, following the attacks on 9/11, Nutsch led a team of U.S. Special Forces on a covert mission to Afghanistan, where they would ride to war on horses to fight the enemy—side by side with their Muslim counterparts—capture the strategic city of Mazar­i-Sharif within a matter of weeks, and successfully overthrow the Taliban. Now a consultant to Special Operations Command, he earned a Bronze Star with valor for his bravery.

On stage, Nutsch enthralls audiences with an edge-of-your­-seat, behind-the­-scenes account of how this event played out, impacted the world and earned them the gratitude of a nation. He also shares perspectives on preparing his team of “guerrilla diplomats” for ever-evolving circumstances and how resourcefulness, inventiveness and commitment, along with adaptability, a diverse team and a capacity to persevere enabled them to successfully accomplish their mission.

Tickets are $5 and available for students, faculty, staff and the general public at the Schine Box Office or online on the Box Office website. The film will have open captioning.