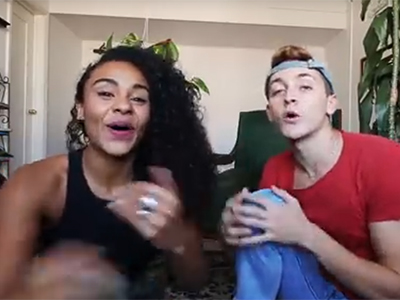 Joanna Franco, left, and Damon Dominique in one of their YouTube videos

In 2015, best friends Damon Dominique from Indiana and Joanna Franco from Brazil started a series of travel videos for young people who want to travel but may have a limited budget, or who lack familiarity with a particular destination. In a few years, these 20-something YouTubers have attracted more than a million views each month and keep their audience laughing while recounting their trials and tribulations as they explore many countries and a wide variety of situations.

On Wednesday, April 11, at 7:30 p.m., Damon and Jo will appear at Gifford Auditorium to share their story. The two, who speak five languages fluently between them, will talk to students about the role of language, travel and global awareness in education and about the story of their business, http://www.shutupandgo.travel.

Tickets are free at the Schine Box Office. The event is sponsored by La Société Francophone and the Department of Languages, Literatures and Linguistics.