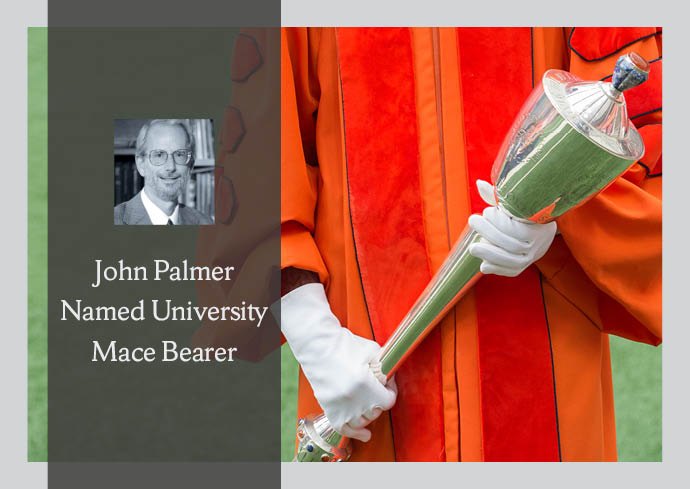 Chancellor Kent Syverud has appointed John Palmer, University Professor and dean emeritus of the Maxwell School of Citizenship and Public Affairs, as the Syracuse University mace bearer. Palmer will be formally installed during the One University Awards Ceremony in Hendricks Chapel on April 20.

The charter mace is an ancient symbol of authority and represents the University’s mission and integrity. The tradition of the charter mace at Syracuse University began in June 1949, with University Registrar Keith Kennedy leading graduates into Archbold Stadium for Commencement.

Syracuse’s original mace was carved of wood and unadorned. It was replaced in 1959 by the current mace, which is made of sterling silver and precious stones. It was a gift to the University by mace bearer Gordon Hoople G’49, former medical director of the University’s Hearing and Speech Center and a former trustee.

Through the years, mace bearers have been professors, deans, administrators and a chair of the Board of Trustees. Palmer succeeds Nancy Weatherly Sharp, professor emerita of newspaper journalism in the S.I. Newhouse School of Public Communications. She was the University’s mace bearer from 2004 until her retirement from the role following the New Student Convocation in August 2017. Student Association President James Franco and Graduate Student Association President Jack Wilson served as interim mace bearers since that time. Their joint appointment was the first time that a student was given this honor.

The mace bearer should:

“The carrying of the charter mace is an important Syracuse University tradition,” says Chancellor Syverud. “John Palmer has been a highly respected member of our faculty and administration for three decades. His work and contributions well represent excellence in academics, research, teaching and student engagement. It is very fitting that he will be filling this special role at our University.”

“I am honored to be representing the faculty and staff of Syracuse University in carrying on this longtime tradition,” says Palmer.

Palmer has been a member of the Syracuse University faculty since 1988, during which time he also served as Maxwell dean (1988-2003) and for two presidentially appointed terms as a public trustee for the Medicare and Social Security programs (2000-07). Prior to assuming the Maxwell deanship, he held several different positions in Washington, D.C., including senior fellow of The Brookings Institution and of The Urban Institute and assistant secretary for planning and evaluation in the Department of Health and Human Services. Palmer has published 13 books and many professional and popular articles on a wide range of topics related to economic, budgetary and social policy concerns, and he won an award for teaching excellence at the graduate level in the Maxwell School.