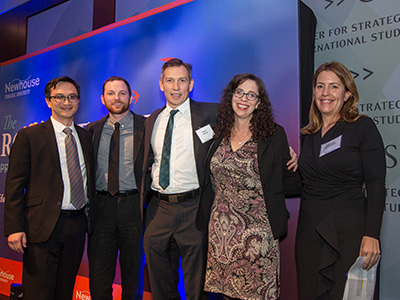 The prize was awarded by Toner’s twin children, Nora and Jacob Toner Gosselin, at a celebration dinner March 26 in Washington, D.C. The keynote speaker was Sen. Mark Warner of Virginia, vice chair of the Senate Intelligence Committee.

The winning Washington Post team includes reporters Stephanie McCrummen, Beth Reinhard and Shawn Boburg; researcher Alice Crites; senior video producer Tom LeGro; and video reporter Dalton Bennett. They won for coverage of candidate Roy Moore and the Alabama Senate race, which uncovered a pattern of sexual misconduct by Moore. The coverage also unleashed efforts by outlets Breitbart and Project Veritas to discredit the Post, efforts which were themselves revealed by the Post team to be unethical.

Toner Prize judge Adam Clymer called their work, “Proof that old-fashioned shoe-leather reporting still matters in the 21st century. A superior effort that would have deserved a prize in any year.” Said judge Lucy Dalglish: “The Post’s efforts in Alabama were extraordinary. This was not a story anyone rushed into. The careful reporting shows the great lengths the team went to in order to be fair and ethical.”

Alongside the Post reporters, two reporters from The Arizona Republic received an honorable mention.

Watchdog reporter Yvonne Wingett Sanchez and senior investigative and data reporter Rob O’Dell ’01, a Newhouse alumnus, were honored for an investigative project on school vouchers. Their yearlong work looking at empowerment scholarship accounts in Arizona revealed financial abuse and mismanagement, and a program skewed toward helping rich families, despite claims to the contrary by Arizona politicians. Their coverage inspired a grassroots organization of parents and teachers to successfully halt expansion of the program and put the decision in the hands of Arizona voters in 2018.

Of their work, Judge Ann Compton said, “The reporters shone a bright light into a dark program.”

In addition to awarding the Toner Prize, the Newhouse School and the Robin Toner Program recognized The New York Times and The Washington Post for coverage of Russia’s ongoing efforts to corrupt the U.S. electoral process.

This year’s Toner Prize competition drew 117 entries from across the country and from across media platforms.

To judge the competition, 39 veteran journalists—most of them now teaching journalism at universities—served on 13 juries to recommend finalists. The Toner Prize was awarded by five finalist judges: Clymer, retired political reporter and colleague of Toner at The New York Times; Compton, retired White House correspondent for ABC News; Dalglish, dean of the Philip Merrill College of Journalism at the University of Maryland; Peter Copeland, retired editor of Scripps Howard News Service and Washington bureau chief of the E. W. Scripps Company; and Bryan Monroe, former editor of CNNPolitics.com and now Verizon Chair and professor at the School of Media and Communication at Temple University.

Robin Toner spent 25 years as a reporter for The New York Times. She began her journalism career in West Virginia with the Charleston Daily Mail and reported for The Atlanta Journal-Constitution. For The New York Times, she covered five presidential campaigns, scores of Congressional and gubernatorial races and most of the nation’s major public policy issues. She died in 2008.

Her family, friends, classmates and Syracuse University have created an endowment for the Robin Toner Program in Political Reporting at the Newhouse School.