The Syracuse University Art Galleries has announced its acquisition of several important works by internationally acclaimed artist Carrie Mae Weems.  These works, “People of a Darker Hue” (2016), “All the Boys (Blocked 1)” and “All the Boys (Blocked 2)” (2016), were made possible through the generosity of the Charina Endowment Fund, Richard Menschel ’55 and the artist. Menschel, along with his brother Robert ‘51, H’91, assisted with the 2004 acquisition of Sol Lewitt’s “Six Curved Walls” in honor of former Syracuse University Chancellor Nancy Cantor.  The work is installed as a part of the Art on Campus Program, on the hillside of Crouse College. 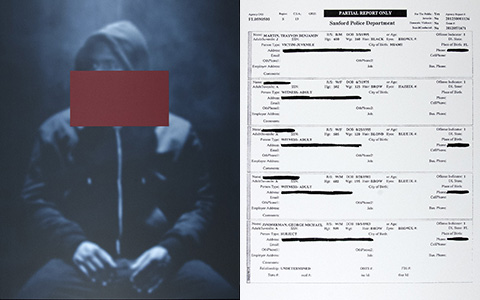 “All the Boys (Blocked 2)” by Carrie Mae Weems

“People of a Darker Hue,” a 15-minute video, and “All the Boys (Blocked),” archival photographic prints with screenprint, ask the viewers to contemplate the prejudicial law enforcement practices that impact communities of color. “People of a Darker Hue” was screened last year at the Syracuse International Film Festival and at the Anglim Gilbert Gallery in San Francisco, while the photographic prints have been seen at the Jack Shainman Gallery in New York City. These works investigate issues of identity and those aspects of police reports where ‘presumed guilt’ is often the norm.  “All the Boys” (2016) specifically responds to the recent killings of young African-American men and suggests the bleak reality that is all too often conjured up by portraits of black men in hooded sweatshirts.  The accompanying text panels remind us of police reports, underscoring the all-too-often ‘presumed guilty’ attitudes of our law-enforcement community.

Considered one of the most influential contemporary American artists, Carrie Mae Weems has investigated family relationships, cultural identity, sexism, class, political systems and the consequences of power. Determined as ever to enter the picture—both literally and metaphorically—Weems has sustained an ongoing dialogue within contemporary discourse for over 30 years. During this time, Weems has developed a complex body of art employing photographs, text, fabric, audio, digital images, installation and video.

Weems has participated in numerous solo and group exhibitions at major national and international museums, including the Metropolitan Museum of Art, the Frist Center for Visual Art, Solomon Guggenheim Museum in New York and the Centro Andaluz de Arte Contemporáneo in Seville, Spain.

Weems has received numerous awards, grants and fellowships, including the prestigious Prix de Roma, the National Endowment of the Arts, the Alpert, the Anonymous was a Woman, and the Tiffany Awards. In 2012, Weems was presented with one of the first U.S. Department of State’s Medals of Arts in recognition for her commitment to the State Department’s Art in Embassies program. In 2013, Weems received the MacArthur “Genius” grant as well as the Congressional Black Caucus Foundation’s Lifetime Achievement Award. She has also received the BET Honors Visual Artist award, the Lucie Award for Fine Art photography, and was one of four artists honored at the Guggenheim’s 2014 International Gala.  Additionally, she is a recipient of the ICP Spotlights Award from the International Center of Photography, the WEB Dubois Award from Harvard University, as well as Honorary Degrees from: Syracuse University, California College of the Arts, Colgate University, Bowdoin College and the School of Visual Arts.