The Syracuse community’s youngest citizens in childcare programs, as well local school-aged and college students, are the beneficiaries of Onondaga County Health Department and Falk College’s joint efforts aimed at reducing sodium intake. The Department of Health’s Healthy Communities Initiative was awarded a grant through the Centers for Disease Control (CDC) to reduce sodium for popular menu items prepared in childcare centers and school cafeterias, such as soups, sauces and salad dressings. 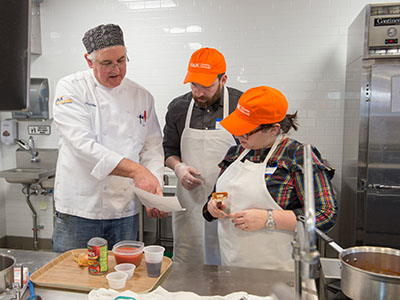 Chef Bill Collins works with participants during the “Flavor and Savor” sodium reducation session in the Falk College kitchens.

According to the CDC, nearly 9 in 10 U.S. children eat more sodium than recommended, and about 1 in 9 children has raised blood pressure, which is a major risk factor for heart disease and stroke. Because the majority of sodium consumed is present in foods prior to their purchase and preparation, the Health Department-Falk partnership created “Flavor and Savor” sodium reduction sessions for local agencies and schools to lower sodium intake from prepared foods as well as when making recipes from scratch.

Developing and leading the sessions were Falk culinary specialist Chef Bill Collins in collaboration with Roseanne Jones, a registered dietitian-nutritionist with the Health Department’s Bureau of Health Promotion and Disease Prevention. Collins teaches courses in Falk College’s nutrition and food studies programs and is a professional chef who previously owned and operated restaurants. “Chef Collins helped participants think about all of the places sodium shows up in recipes and how to combat it,” says Jones. “The training helped participants build flavor into recipes without adding any salt.”

Using a simple hands-on approach, participants learned that with only minor adjustments, sodium content can be significantly lowered. “We helped participants understand the sodium content of pre-packaged foods and what approaches they can take to make their food healthier,” says Collins. During the session, Collins compared a store-bought barbecue sauce to one he served in his restaurants for years with 58 percent less sodium. “By changing two ingredients—no-salt-added canned tomato and ketchup—the reduction jumped to 97 percent. The marinara sauce and the salad dressings all had similar results,” notes Collins.

According to Jones, 25 percent of adults in Onondaga County have been diagnosed with hypertension. National estimates show there could be another 36 percent of people who go undiagnosed. “Diet is important in this equation. Changing sodium content in our pre-made foods, as well as foods from cafeterias and restaurants, helps people reduce sodium intake without their even having to try,” she says.

When Falk College opened the Susan R. Klenk Café and Teaching Kitchens in 2016, the vision was to create a space that set the stage for industry-leading, forward-thinking approaches to food and nutrition that would benefit students as well as the community at-large. “Social responsibility in the community is a critical part of our mission,” says Falk Dean Diane Lyden Murphy. “This program is another example of how Falk College’s experiential kitchens allow us to train future food and nutrition professionals to work effectively with the community.”