College of Law to Welcome Preet Bharara as 2018 Commencement Speaker

College of Law Dean Craig M. Boise has announced that Preet Bharara, former U.S. Attorney for the Southern District of New York, will be the speaker at the Commencement of the Class of 2018 on May 11 at 11 a.m. in the Carrier Dome. The announcement can be viewed at this video link. Bharara appears thanks to the generosity of a College of Law alumnus. 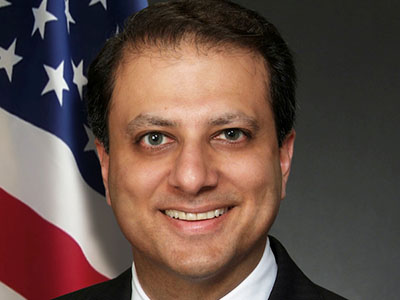 “Hosting a commencement speaker of Mr. Bharara’s caliber is a point of pride for the College of Law and a unique opportunity for our students to hear from one of the leading advocates for justice in our time,” says Dean Boise. “I know Mr. Bharara is thrilled to join us for Commencement this year, and we look forward to hearing a memorable and inspiring Commencement address.”

As U.S. Attorney for the Southern District of New York, Bharara earned a strong reputation for his attentive and successful campaign against public corruption and Wall Street crimes, and he was known as a “crusader prosecutor” and the “Sheriff of Wall Street.”

From 2009-17, Bharara prosecuted nearly 100 Wall Street executives; reached historic settlements with the four largest banks in the United States; closed multibillion-dollar hedge funds for illegal activities; and conducted corruption investigations of high-profile officials in both the Democratic and Republican parties.

In 2012, Bharara was featured in TIME magazine’s list of the “100 Most Influential People in the World,” and The New York Times called him one of the nation’s “most aggressive and outspoken prosecutors.” Currently, he hosts “Stay Tuned with Preet,” a popular podcast series about justice and fairness.

“I look forward to visiting Syracuse and to meeting and addressing the graduating College of Law Class of 2018,” says Bharara. “Now more than ever, our nation, founded on and nurtured by the rule of law, requires lawyers and public servants who understand and respect our laws and who are willing to uphold them when confronted by corruption, injustice and impunity. I have every confidence that the graduating class of 2018 understands and is ready to except its place in history as protectors of democracy.”