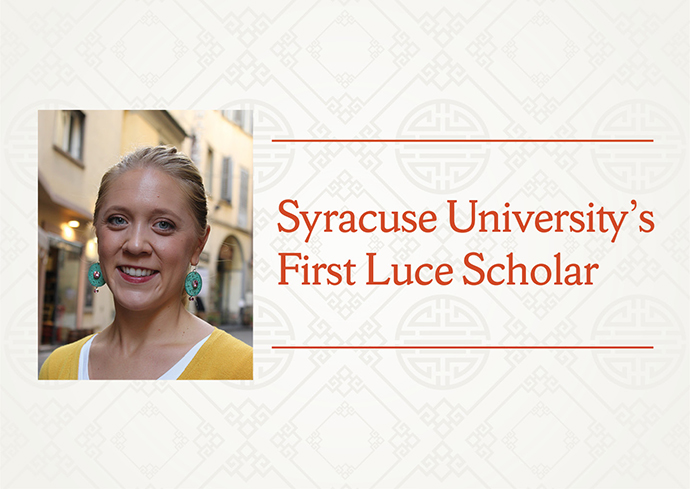 As a child growing up in rural Minnesota, Laura Marsolek ’13, G’17 was fascinated by small objects. She was always collecting stones and beads and imagining how she could turn them into beautiful works of art. Her parents encouraged her creativity—they created a studio complete with an old jeweler’s bench and enrolled her in a community art program, where she learned the art of metalsmithing from a Norwegian artisan. She was also encouraged in her artistic pursuits by her grandmother, an avid sewer.

That creative spirit and family support began Marsolek on a path that has wound its way through Japan, Syracuse University, Kosovo and Florence. Now, that path will run through Asia. Marsolek, an aspiring jewelry expert and museum curator, is Syracuse’s first Luce Scholar. The Luce Scholars Program is a nationally competitive fellowship program launched by the Henry Luce Foundation in 1974 to enhance the understanding of Asia among future leaders in American society. The program provides stipends, language training and individualized professional placement in Asia for 15-18 Luce Scholars each year. As a Luce Scholar, Marsolek will spend a year in Asia, beginning in late June, to study Asian jewelry traditions and curatorial practices. Her placement is still being determined.

An alumna of the College of Arts and Sciences and the College of Visual and Performing Arts and former participant in the Renée Crown University Honors Program, Marsolek is one of 18 Luce Scholars chosen from a pool of 162 candidates nominated by 73 colleges and universities across the United States. Syracuse University is allowed to nominate up to three candidates for each year’s Luce Scholars competition. Nomination is coordinated through the Center for Fellowship and Scholarship Advising (CFSA).

Marsolek worked with theCFSA in preparing her application. She also worked with Terry Lautz, visiting professor in the Maxwell School of Citizenship and Public Affairs and former vice president for the Luce Foundation, to prepare for her interview.

“Laura’s unusual combination of talents and interests as an accomplished art historian, artist and arts administrator/curator—and her clear focus on gaining experience in Asia—made her a great Luce candidate,” says Jolynn Parker, director of CFSA. “She started early and worked hard to polish her application materials and, after she was chosen as a finalist, to practice for her interview. We’re so thrilled that she has been selected as SU’s first Luce Scholar. The opportunity will certainly help her become a leader in jewelry history and arts curation.” As a high school student, Marsolek had the opportunity to study abroad in Japan, living with a host family and attending classes. There, she explored local heritage crafts such as pottery, calligraphy and ikebana. “While Japan does not have a significant jewelry tradition, I developed a great appreciation for other craft mediums, which, like jewelry, emphasize a respect for process and adherence to time-honored technique,” she says. “I came to see how craft is inextricably linked with cultural practice. Japanese craft left an impression on me and a desire to learn more about how craft is experienced in Asia, both in the studio and in a museum.”

Marsolek chose Syracuse as the place to pursue her undergraduate degree because it would allow her to pursue her dual passions in metalsmithing and art history. As an undergraduate, she made a connection with College of Arts and Sciences Board of Visitors member and alumna Mary Gilbert Palmer ’65, a Utah-based jewelry historian. Marsolek has watched Palmer at work in Rome, London and Utah, and their mentor-mentee relationship continues to this day.

After graduating with her bachelor’s degree in 2013, Marsolek embarked on a year of study and English teaching in Kosovo as a Fulbright English Teaching Assistant. In addition to teaching English, she found an apprenticeship in a filigree studio, where she learned and practiced this delicate form of metalwork. It was an experience Marsolek recounts with much fondness, recalling sharing Turkish coffee and singing Albanian songs with the filigree masters as she learned their craft. Her experience in Kosovo taught her a great deal about the intersections of different cultures and traditions, she says.

After her experience in Kosovo, Marsolek’s master’s degree work brought her back to Syracuse University. She enrolled in SU’s prestigious graduate program in Renaissance art, based in Florence. There, she undertook an independent research project on a wine fountain commissioned by Ferdinando de’ Medici for his wedding feast in 1589.

“This spectacular object came alive thanks to Laura’s patient and thorough examination of obscure documentation in the Florentine archives and her artistic sensitivity to the object’s design and facture,” writes Gary Radke, professor emeritus of art history and director emeritus of the Florence Graduate Program in Renaissance Art, in a nomination letter for the Luce Scholar Program. “Not content simply to appreciate the fountain’s beauty, she also reconstructed how it might have actually functioned, no small challenge when so few objects of this nature survive.” Marsolek completed her master’s degree in 2017 and currently lives in Florence, where she is a teaching assistant in abroad programs for Syracuse and for Stanford University and teaches English. She is also studying engraving in the Buccellati goldsmithing tradition.

During her year in Asia, Marsolek wants to explore ways in which curators approach challenges to educating visitors about the complexity of jewelry making and the variety of metal objects beyond body adornments—such as ceremonial vessels, religious statues and decorative objects. Marsolek is looking forward to returning to Asia, the place where her interest in exploring craft heritage was formed.

As the study of jewelry and art history can be Eurocentric, she is also looking forward to immersing herself in a different perspective. In Asia, Marsolek is eager to explore culturally specific techniques, what jewelry says about society and curatorial practices.

“I realize that in order to be a leader in the field of jewelry history, I need more exposure to Asian craft,” she says. “I want to return to Asia, the place that first inspired my interest in craft, to better understand the processes of its creation as well as the methods of its display within a museum.”