Annabelle Weiss dropped out of Hunter College in 1943 because she wanted to enlist in the armed services. With her parents’ consent, she joined the U.S. Marines and reported for training at Camp Lejeune, North Carolina, in April 1944. There she learned to “march, march, march” and was assigned to inspect airplane engines. Weiss was later assigned to Marine Corps Air Station Cherry Point, North Carolina. She served in the transportation unit, where her tasks included chauffeuring the base’s commanding officer. She was discharged in 1946. 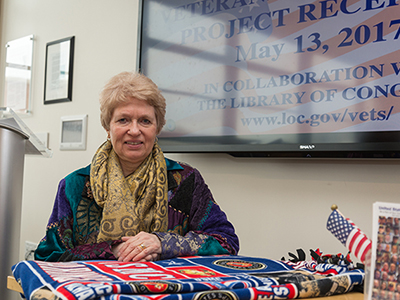 Weiss, then 94, shared her story with Edna Susman G’78 as part of the Veterans Testimonial Project, a program of the Half Hollow Hills Community Library in Suffolk County, New York. She’s one of nearly 90 U.S. military veterans Susman has interviewed since 2014. “I’m trying to get the word out so libraries see this as history and outreach,” Susman says. “People are dying, and I want to get their stories to share with younger generations.”

Susman discussed the project during her keynote address March 3 at the Day of FiTs conference (FiTS stands for Filling in the Spaces) at the School of Information Studies (iSchool). The Library and Information Science Student Assembly organized the annual event, which featured topics of interest to LIS graduate students that are outside the regular curriculum. Workshops addressed issues including professional resumes vs. CVs, nature programming for libraries and LGBTQ representation in middle grade and young adult literature.

Susman started the project after realizing the busy library where she had worked for 20 years offered no specific outreach for local veterans. She described how the project works, saying that other library staffs can replicate it easily and inexpensively. She advertises and invites veterans to participate, then records interviews with them and creates a DVD. She uploads the interviews to the library’s YouTube channel, which patrons can access via the library’s website. The library also holds an annual reception for the year’s interviewees, and each veteran receives a DVD.

Some interviews happen after Susman spots someone wearing a hat with military insignia and tells them about the program. Others hear about it and call to learn more. She understands that some veterans will be sharing painful memories.  “I tell them if there’s anything they don’t want to talk about or don’t remember, that’s fine,” she says.

“Some say ‘I have nothing to say’ or ‘I didn’t do anything interesting,’” Susman adds. But she disagrees, calling the vets “wonderful people with amazing stories.” The oral histories of veterans of World War II, the Korean and Vietnam wars, the conflicts in Afghanistan and Iraq and military service during peacetime preserve important memories for families and historians, she says.

Susman interviewed one woman who served in the medical corps in Afghanistan who “didn’t go into details.” A World War II veteran who worked on the atomic bomb “knew top secret stuff.” One Vietnam vet volunteered to become a combat photographer “because he didn’t want to kill anyone.”

After Susman’s program was underway, she learned the Library of Congress had started the Veterans History Project (VHP) in 2000. The national project collects interviews, correspondence and memorabilia from veterans and their families. Susman applied some VHP procedures to her project and sends the Library of Congress copies of the DVDs she produces.

“Without them, my life would have been very different,” she says.

Online research, then in its infancy, “was all command driven,” she explains. “Nobody knew how to do it. We’d type in ‘search and retrieve.’” She loved working at “the mother of all libraries,” she says. “You really felt like you were making a difference.”

She and her husband moved to Long Island, where she raised their two daughters, both Syracuse University graduates. After several part-time jobs—including three at once—she started working at Half Hollow Hills Community Library. She describes library work as “giving people the information they need.”

The job has changed dramatically since her iSchool days. “People can Google everything,” she says. “Now we help people download material and work with their devices.”

She enjoys interviewing veterans “because I get to know them,” she says. “When they come in the library, they’re family. I’m in awe of these people.”