George Saunders Elected to Academy of Arts and Letters

George Saunders G’88, professor of English in the College of Arts and Sciences and acclaimed author, has been elected into the membership of the American Academy of Arts and Letters. Saunders is one of 12 individuals from the arts, literature and music who will be inducted as members of the 250-person academy at its annual induction and award ceremony in mid-May. 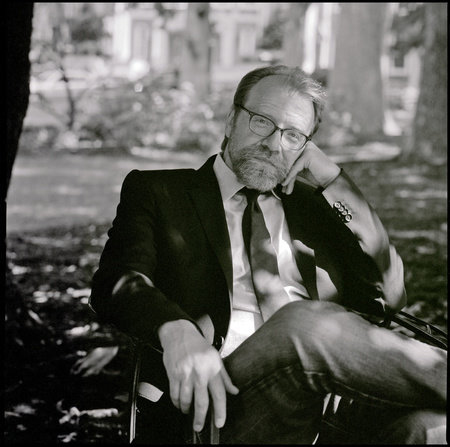 “George’s selection for membership into such a distinctive body speaks volumes about his extraordinary talent and impressive achievements as a writer,” says Karin Ruhlandt, dean of the College of Arts and Sciences. “The academy’s membership roster includes some of the most recognizable and beloved names in literature over the last century. This is a well-deserved tribute to his work and to his commitment to excellence in his craft.”

Founded in 1898, the Academy of Arts and Letters was created as an honor society of the country’s leading writers, artists, composers and architects. Its members are elected for life, with new members elected as vacancies occur. Among the writers elected to membership since its founding were Henry James, Edith Wharton, Mark Twain, Kurt Vonnegut, Pearl S. Buck, John Updike and Willa Cather.

“It is a great honor, finding oneself beside so many great artists,” Saunders says. “My main goal at this point is to somehow live up to it.”

In his nominating statement for Saunders, fellow writer and academy member Jonathan Franzen said Saunders “has a world-class ear for contemporary vernacular and a prose style utterly distinctive in its relaxed precision. Again and again, he persuades us that wacky, subversive, formally inventive fiction not only isn’t contrary to our nation’s spirit; it’s the most natural expression of that spirit. Only two other Americans, Twain and Vonnegut, have ever made it look so easy. Saunders is their hugely gifted heir.”

A member of the College of Arts and Sciences faculty since 1997, Saunders was already an acclaimed short story writer when in 2017 he published his first novel, “Lincoln in the Bardo.” The book was an instant success, debuting at number-one on The New York Times Best Seller List upon its release in February 2017 and going on to win the Man Booker Prize, one of the most prestigious awards in English-language literature.

Saunders has earned numerous distinctions for his short story works. His 2013 short-story collection “Tenth of December” won the Story Prize and the inaugural Folio Prize, and was a finalist for the National Book Award. Two other collections, “Pastoralia” and “CivilWarLand in Bad Decline,” were New York Times Notable Books. Another collection, “In Persuasion Nation,” was a finalist for the 2006 Story Prize. Other distinctions include MacArthur and Guggenheim fellowships, three National Magazine Awards for fiction, the PEN/Malamud Award and the World Fantasy Award for Best Short Fiction. Last year Saunders wrote and produced a comedy pilot, “Sea Oak,” based on his 2000 short story. The pilot starred Glenn Close and premiered last fall on Amazon.

In addition to electing new members as vacancies occur, the American Academy of Arts and Letters seeks to foster and sustain an interest in literature, music and the fine arts by administering more than 70 awards and prizes, exhibiting art and manuscripts, funding performances of new musical theater works and buying artwork for donation to museums nationwide.