Team of Evaluators from Middle States to Visit Campus this Month

Syracuse University’s reaccreditation from the Middle States Commission on Higher Education enters its final phase this spring, with a team of peer evaluators scheduled to visit campus March 25-28. 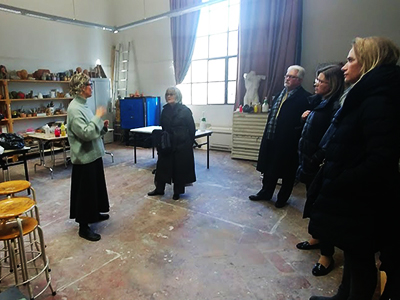 During the visit, the evaluators, who come from other Middle States-accredited universities, will meet with a number of faculty, administrators, staff, and students and engage in informal dialogue with members of the campus community. They will use what they learn to determine whether the self-study report the University submitted to Middle States last December reflects the reality on the ground here at Syracuse—and whether the process itself has been sufficiently inclusive.

The visit is the last step toward reaccreditation, and the commission is expected to issue its decision in June.

“This site visit is an incredibly important piece of the reaccreditation process,” says Jeff Stanton, associate provost for academic affairs and co-chair of the Reaccreditation Steering Committee along with Libby Barlow, assistant vice president for institutional research and assessment, and Rochelle Ford, professor and chair of public relations at the Newhouse School. “It really shows Middle States that we are doing what we said we are doing in the self-study report. Their findings during the visit will inform their report to the board of commissioners at Middle States and, ultimately, determine the outcome of our bid for reaccreditation.”

A first step in the on-site evaluation process took place last month when Ford, along with Vice Chancellor and Provost Michele Wheatly and Syracuse Abroad Interim Executive Director Petra Hejnova traveled to the University’s Florence Center in Italy. There they hosted James Bean, provost of Northeastern University and chair of the site visit team, as he conducted a site visit of the University’s study abroad facility in that country.

“The site visit went very well,” says Ford, “and Dr. Bean came away very impressed with the operation we have there. He said he saw evidence of both formal and informal assessments, as well as improvements that were made based on those assessments. And I know the team will be looking for more examples of assessment and improvements when the full team of evaluators visits campus later this month.”

The main campus site visit will be the culmination of a two-year review process during which nearly 140 faculty, staff and students engaged in research, discussion and writing of the findings and recommendations that the University’s Reaccreditation Steering Committee included in the self-study report.

The steering committee put forward four recommendations, each of which represents a commitment to Middle States that the University will take the stated action. Those recommendations can be reviewed by following the link to the full self-study report.

Membership on the steering committee and the eight self-study teams included formal representation from all schools and colleges, many nonacademic units and the University Senate. Campus input was gathered through open forums and online feedback, and the draft study that the team produced was posted online for additional feedback over the summer and early fall last year.

“The reaccreditation process from beginning to end was very inclusive,” says Barlow. “That is the way Middle States intended it to be, and it is the absolute best way to ensure that the findings in the report are accurate and the recommendations both aspirational and achievable.”

Accreditation serves as a public indication that Syracuse University lives up to its mission and strives for self-improvement. It also is essential for the University to remain eligible for federal financial aid, grants, contracts and other federal sources of support.

The current accreditation cycle is particularly crucial because it centers on a revised set of standards, with significant emphasis placed on assessment and academic program review. This is the first reaccreditation cycle by which Syracuse will be reviewed under the new standards.

The steering committee chairs urge all those who are not yet familiar with the self-study report, its findings and recommendations, to read the document in advance of the site team visit.

For more information on the self-study process, as well as what is at stake when it comes to accreditation, go to the University’s Middle States reaccreditation website at middlestates.syr.edu.